Samsung Galaxy J8 will be available in India on June 28 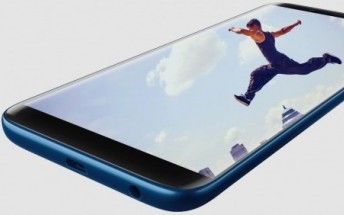 Samsung unveiled the Galaxy J8 for the first time last month. Back then the company said the phone would be out in India at some point in July, but we have some good news. It turns out that the J8 is actually going to be released in the subcontinent in just three days - that is, on June 28.

That's a nice example of a rare occurrence in the mobile world - a product becoming available before its initially anticipated release window. The Galaxy J8 will be purchasable in blue, black, and gold.

Give the ‘Infinity Touch’ to your picture’s background with the #BackgroundBlurShape of the new 16+5MP #DualRearCamera on #GalaxyJ8. Only 3 days to go for the big launch. Stay tuned. pic.twitter.com/5uj2gpORLO

It comes with the ability to reshape the camera background blur - hearts, butterflies, suns, stars, you name it. The blur itself is created by the dual snapper system, comprising a 16 MP and a 5 MP sensor.

hhahha Well said Next year I don't like buy j series .. mayl be s8 .when it price is come under 25k

I think it will be a amazing phone. waiting to buy it. moreover its not a chines phone and these money will not go against india.