The Samsung Galaxy M10 will be the smallest of the new M-series, but that doesn’t make it less relevant. Leaked specs by way of a manual show that it will have a 6.2” screen (720p+) with a teardrop notch (the so-called Infinity V).

The nfo suggests that the chipset will be an Exynos 7872, not 7870 as Geekbench reported. This means a move from eight A53 cores to 2x A73 + 4x A53 and a newer, more capable GPU as well. The phone will come in versions with 2GB and 3GB of RAM and will have a dual SIM slot with a dedicated spot for a microSD card. 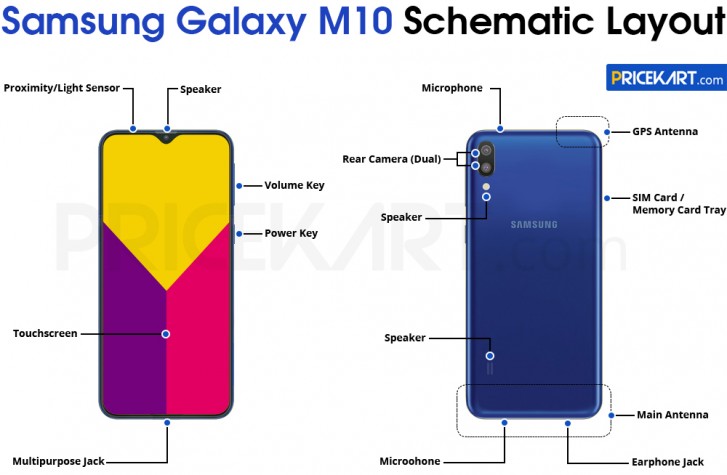 Like the other M-phones, this will have a dual camera on the back – a 13MP main module (f/1.9, 1.12µm) plus a 5MP depth sensor. There’s no fingerprint reader on the back.

The phone will launch with Android 8.1 Oreo and will not have NFC. No 5GHz Wi-Fi either, but there is an FM radio receiver.

The Galaxy M phones, M10 included, will be unveiled on January 28 and will be online exclusives.

Only in india and china so Samsung canstand a chance against xiaomi and huawei. In eaurope and Asia this phone will be a lot more expensive.

No no no. These phones cost less than half of Poco