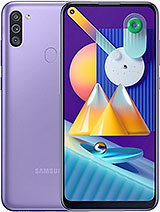 I just received latest update with September SU and touch freezing gone and i hope it will not come back.

Samsung M11 is worst phone. Its touch screen requires so many touch to be active. Also hangs for short while. Only 600-700MB available always out of 3GB Ram. Its device care app is useless. As soon I run it to boost ram which reach max. Upto 1GB for instance and close as again down to 60MB. Senseless.
Samsung improve its device hanging problem which almost exists in all models.

nice budget phone for moderate usage, snapdragon is good for multitasking and performs well under normal use, also the phone design looks nice and modern unlike the dropwater notch design, also the display screen has a nice contrasted colors, it's pls display from samsung has a better viewing angles than ips displays, also good size 6.4 and a long lasting battery with fast charging 15w, the only downside I can see to this phone is that it's being 197g so it's kind of heavy

I purchased Galaxy M11 and within 2 months, power button is not working and does not off the screen at all and Battery is draining all day . I tried to fix using some apps and restarts but not working at all.

Nice budget phone. Everything is moderate and the phone works properly. Battery back up is amazing.

guy, 03 Sep 2021replace screen but can't hear someone who calling........ moreUse hear pods are a headphone

Does it affects the battery life (especially lowers) after the update or just the same? (Just based on your experience)

My worst Samsung device experience in touch screen. It freezes most of the time and i have to lock and unlock sometime 2 to 3 time to make the touch work properly. I lost in game raid due to touch problem.

Ultimatum, 02 Sep 2021Do you still recommend updating for Android 11? Are there c... moreSorry for the delay..yes you should update...i no longer have this phone..
1) edge panels
2) better battery saving modes
3) notification history

replace screen but can't hear someone who calling..... advice???

Not known, 18 Jun 2021In android 11 update there is shortcut for screen shot in &... moreDo you still recommend updating for Android 11? Are there changes of the smartphone in software and performance?

Don't buy samsung products in India. If you buy remember only S series is good else all others are terrible.
This m11, m21, m31, m51 and all A series phones are slow like J series. They are selling old products only with slight modifications in name of new series.
This m11 can't open a pdf of 20 mb without lag .
Go for stock android phones. one ui is better than others but it doesn't allow you to fully control your phone.
BUYER BEWARE

After the update to android 11 some typing problems were solved but the worst thing in this cellphone is the sound, it's too low don't wadte your money on it you can hear nothing on street even with a little noise

Gets 2 updates between 13 days