An update is rolling out for the Samsung Galaxy M20, which promises to speed up charging. The phone has a massive 5,000mAh battery and comes bundled with a relatively fast 15W charger (same as the S10 flagships got). We haven’t seen any complaints about charging speeds, so it’s not quite clear what is the issue that Samsung fixed.

The update also improves the general stability and performance of the phone, according to the change log. 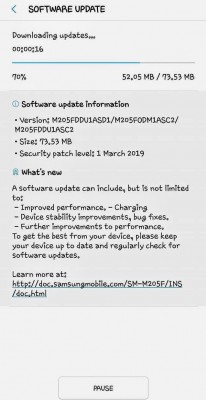 Update for the Samsung Galaxy M20

This is a small update, just a 73MB download, so the base software is unchanged – the phone remains on Android 8.1 Oreo with the March security patch. The Galaxy M20 is on a quarterly update schedule, so the next major update should come around June.

Well what did you expect from prototype like device from its first generation and from a company which just doesnt care like with Note 7. More simillar things will come and they will cancell this,

Updated.. Bad news for me.. My charge is going down rapidly now..😔😔😔