Samsung Galaxy M40 is arriving tomorrow in India and the phone's profile was just uploaded on the Android Enterprise website. As we’ve previously seen, the phone will sport an Infinity-O screen that is a display with a hole for the selfie camera in the upper left corner. 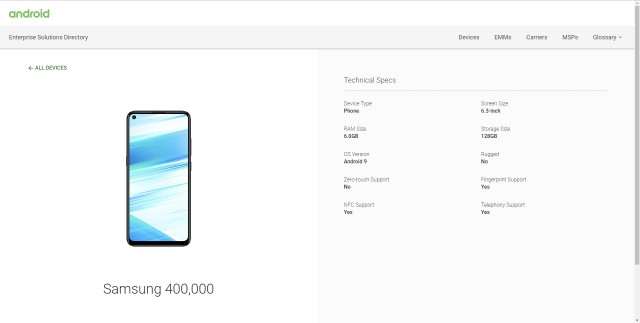 The listing gives us a basic insight of the phone like a 6.3” screen, 6 GB RAM, and 128 GB storage. The Android 9 version is also listed, but this is hardly newsworthy. What is more interesting is that the phone is likely to follow the Galaxy M30 naming duality that is available in China as Galaxy A40s. The Galaxy M40 looks a lot like the Galaxy A60, currently exclusive for the Chinese market.

Another hint that the phones are the same is the similarity between the rumored specs from earlier - Snapdragon 675 chipset, 32 MP main camera, and an 8 MP wide-angle secondary shooter. Interestingly enough, the Galaxy M40 appears to have a Bixby button on the side, while the Galaxy A60 has no keys on the left. Whether the image is true and the similarities are worth the discussion, we'll know completely after tomorrow's unveiling.

Still top left side front camera! Not interesting. Under display camera, or center top positin of camera i like.. and good look