Samsung is going to introduce the Galaxy M51 sooner rather than later as its model number SM-M515F stars in an ever increasing number of leaks. While early renders suggested a triple camera setup, a fingerprint scanner on the back, and a punch-hole in the left corner, now we have the official press images showing them to be fake.

The Galaxy M51 will have four shooters in an L formation while the fingerprint scanner will double as a power key on the right side of the phone. The selfie camera will be in a punch hole, but the cutout is in the center rather than any of the corners, and here’s how the phone looks like.

Putting the fingerprint scanner on the side means the display is likely going to be an LCD, rendering an under-screen solution impossible. It is obviously a flat panel with small bezels, the bottom one being slightly thicker than the rest. While we don’t have a direct look at the bottom of the Galaxy M51, it is easy to make out the 3.5 mm audio jack on the left of the USB-C port. 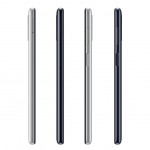 Specs are still scarce, but we expect a massive 7,000 mAh battery with 25W fast charging, a Snapdragon 730 chipset, and 8 GB RAM. The very same specs leak also claimed the Galaxy M51 will have a 64 MP main camera, but looking at how different the early renders were from the original, we’re starting to question the authenticity of those rumors as well.

Another source claims a launch is scheduled for the second half of September and also gives us a price range - around INR25,000-INR30,000, which is anywhere between $330 and $400.