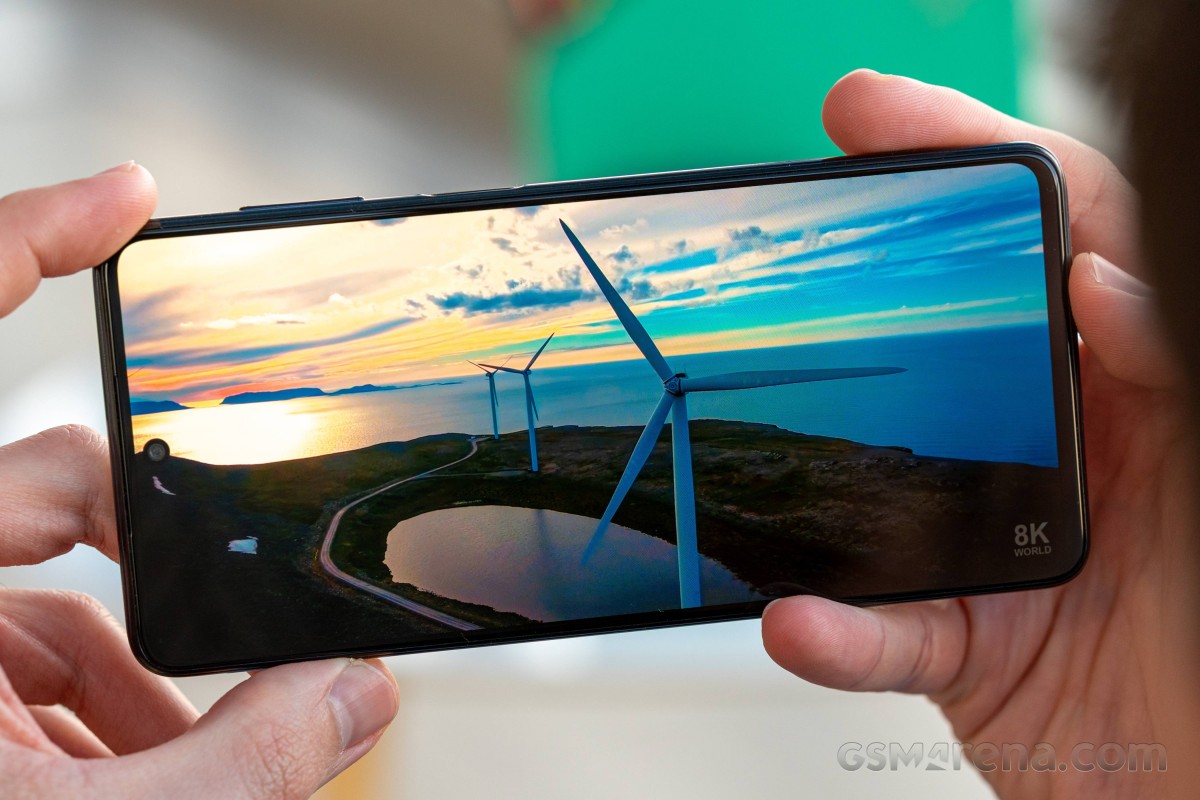 As somewhat of a milestone, the M52 5G is the first M-series phone to come with a 120Hz refresh rate. It's not exactly a cheap phone, and as M models go, the M52 is the most advanced one, but it's still nice to see the 120Hz refresh rate in what is Samsung's lower tier in the lineup.

It's not suffering from any shortage of brightness either and is able to go as high as 777nits in bright ambient conditions. It's a 100-nit increase over the M51's result and roughly comparable to the numbers we got out of the A52 trio. The brightness you can get yourself with the slider is a rather standard 402nits.

There are no surprises in terms of color handling. There are two modes - Vivid and Natural, the first one being the default. In Vivid mode, you get a five-position temperature slider as well as RGB sliders behind an 'Advanced settings' button. This Vivid mode supports a wide color gamut and is fairly accurate for displaying DCI-P3 content (average dE2000 of 2.9), though it does exhibit a faint blue tint as is all too typical. Bump the temp slider one notch to warm, and things get slightly better on average, with the white point now nearly perfect.

Natural mode, meanwhile, is very accurate for displaying sRGB content, as we've come to expect from Samsungs across the price spectrum. We measured an excellent average dE2000 of 1.5 with nearly spot-on whites.

Samsung makes no claims for HDR capability on the Galaxy M52 5G, and we didn't get HDR streams from Netflix or Amazon Prime Video, though the Widevine L1 certification does mean you can get FullHD resolution. YouTube does serve HDR videos on the M52, so there's that.

You get the usual Motion smoothness menu item in display settings for enabling the 120Hz refresh rate. There are two options - Standard and High, and we got it set to Standard out of the box, which delivers 60Hz across the board, as expected. 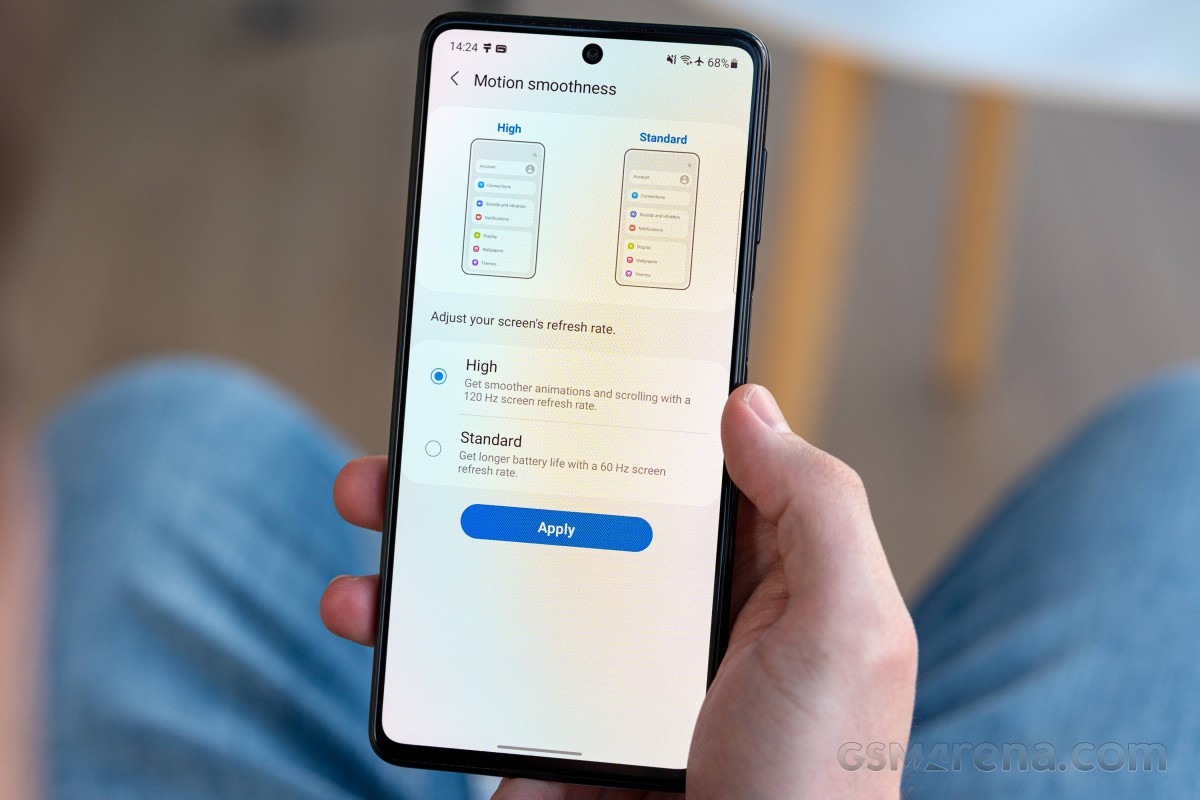 The High setting, conversely, pretty much locks things at 120Hz - there's no adaptive activity-based switching of any sort. That means that even for video playback, you'd be getting the full 120Hz (in the Gallery, YouTube, Netflix, Google Photos - everywhere, basically), which is hardly ideal in terms of battery life. The usual exceptions apply as well - camera viewfinder and Google Maps do force a switch to 60Hz.

The Galaxy M52 has a 5,000mAh battery inside - you can call it an upgrade over the 4,500mAh of the A52s, but it's still nowhere near the 7,000mAh of the previous generation. It's pretty efficient at turning those mAhs into battery life, though, so we'll allow it.

We clocked 14:34h in web browsing over Wi-Fi with the screen running firmly at 120Hz, which increased to 16:18h if we switched to 60Hz. In video playback, meanwhile, the M52 5G was good for 21 hours. Voice call longevity was similarly solid, with the phone lasting over 34h. 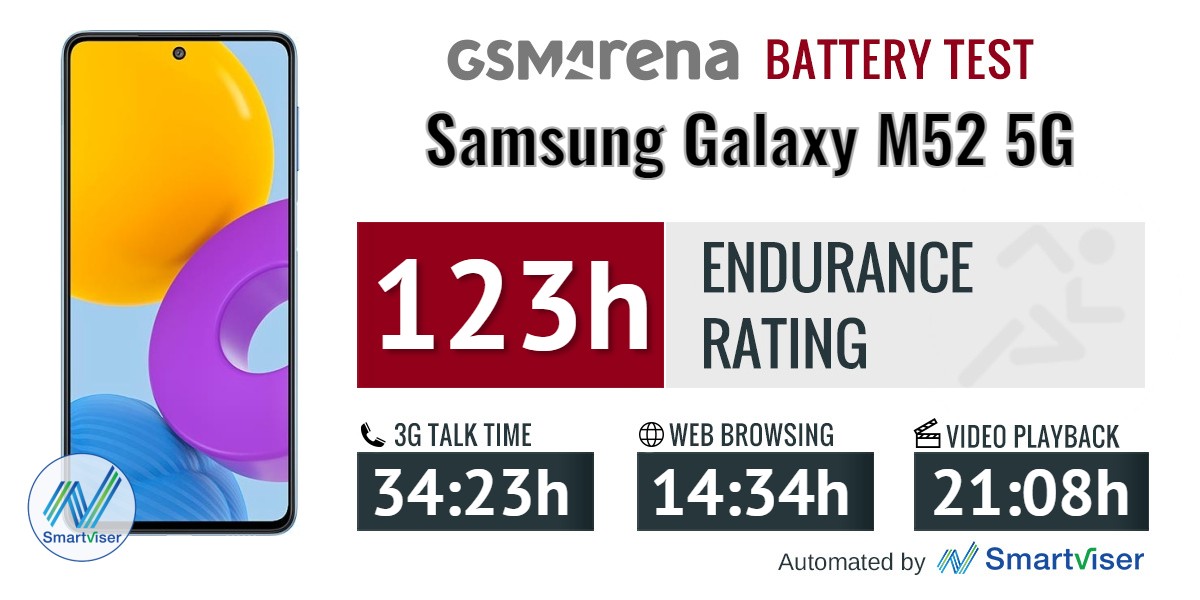 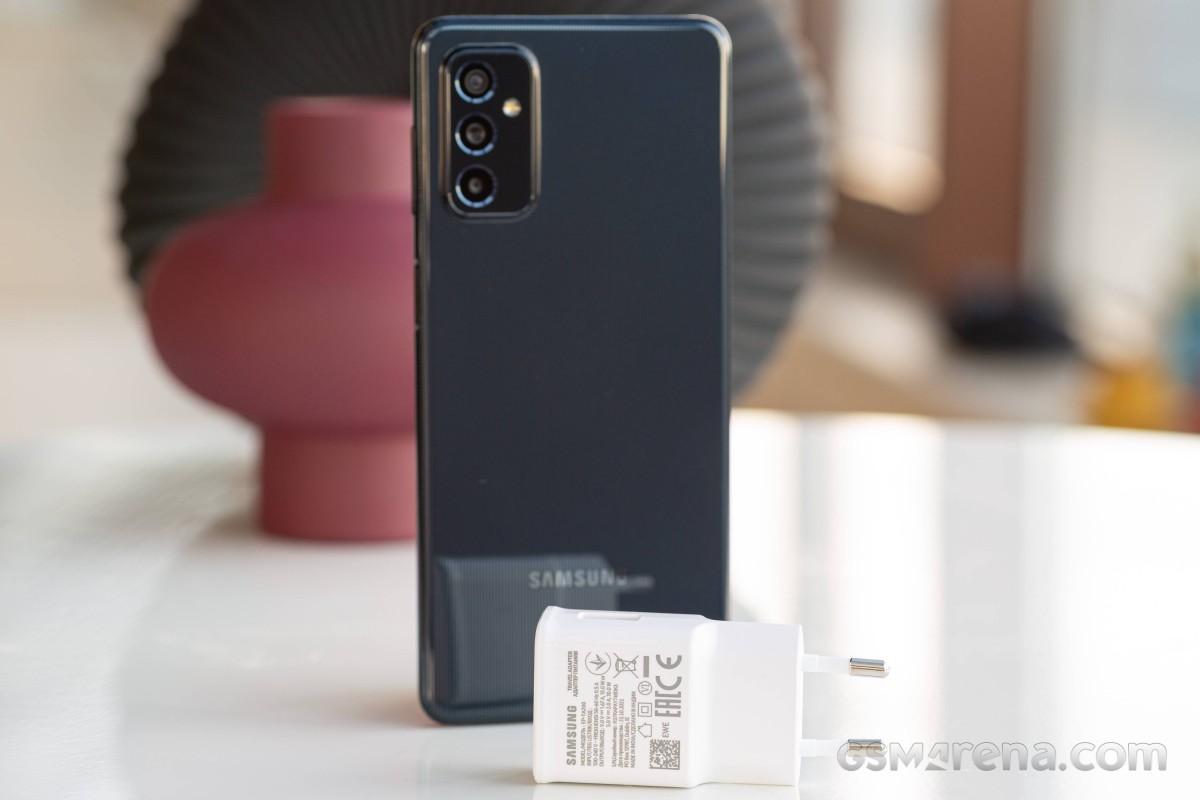 The good news is that, like higher-end Samsung phones, the M52 itself supports up to 25W charging (on paper; in practice, we measured a little over 22W). If you get a higher-end 25W Samsung charger, then you can get to a full charge in 1:19h or 50% in half an hour. That should also be possible with third-party adapters that adhere to the USB PowerDelivery standard with PPS and can output 25W or more.

Even so, the M52's charging speed is hardly spectacular, and there are competitors that can charge more than twice as fast. It's a Samsung, after all, and they don't break records in this area.

The Galaxy M52 5G has a single speaker, a bottom-firing one. It's not using its earpiece for an extra channel like the A52s, and some competitors do. 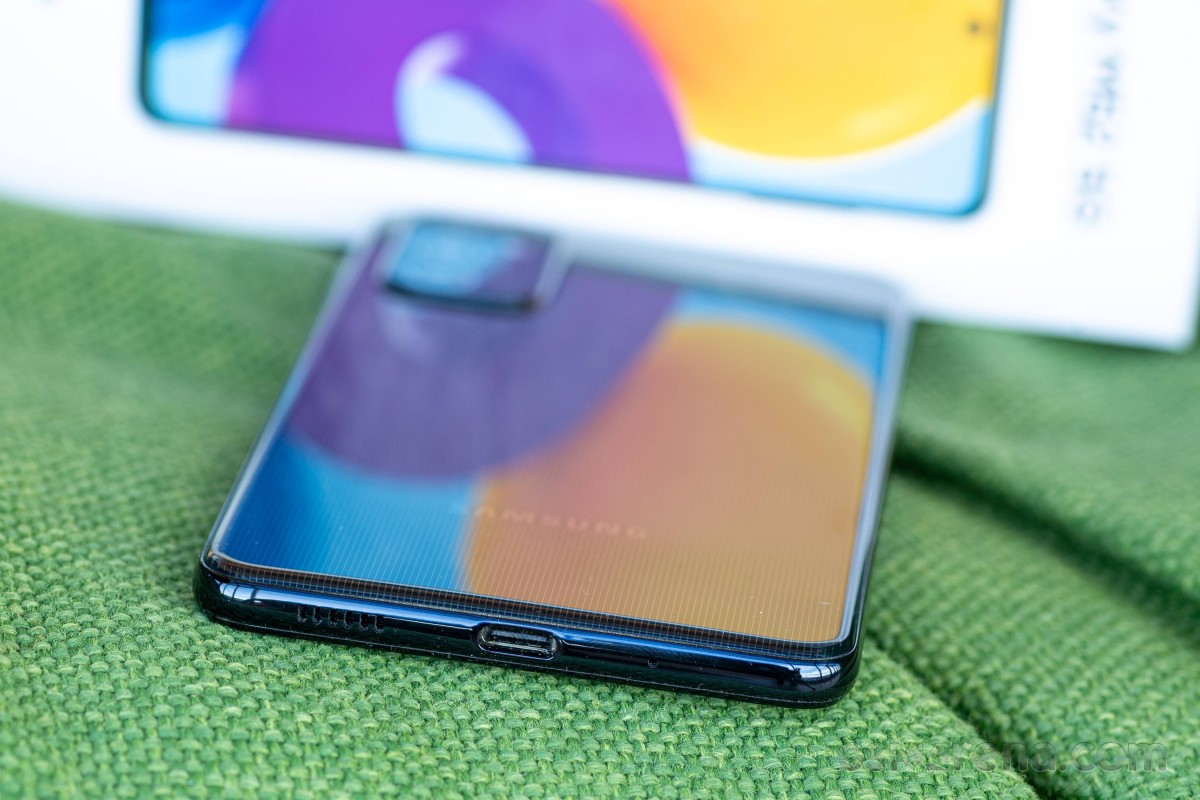 The one speaker it does have is not very loud either, only making it to the 'Average' category for loudness in our test. When it comes to quality, we'd say the M52 5G is an improvement over the M51 with cleaner vocals and treble, though similarly lacking in low-end thump.

Appeared in my phone too... A black spot aka dead pixel...

From the non wireless charging phones, this is the Best bang for buck. One year of use, zero complaints!

Ive been using it for almost a year now. No issues.