Android 9.0 Pie with One UI on top, S Pen goodies too

The Galaxy Note10 runs Android 9.0 Pie with Samsung's custom skin on top - business as usual. We're in One UI times now, the latest iteration of the company's proprietary overlay, introduced with the Galaxy S10-series. The new UI focuses on the one-handed operation and aims to simplify the whole user experience although simplifying Samsung's feature-packed software is a really tough job. 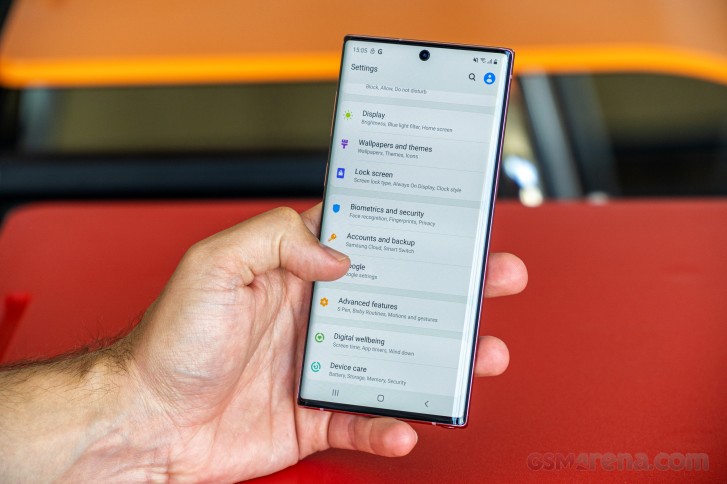 The one-handed use, however, is significantly improved with the One UI, especially in a tall aspect ratio like this one - swiping down in menus drops the UI elements to the bottom half of the display for easier reaching. The same goes for the notification shade - swiping twice will bring the quick toggles within thumb's reach.

Still, some UI items such as search boxes in the app launcher or in Settings require you to stretch your thumb to the top of the screen which is less than ideal so there is still room for improvement.

Feature-wise, the Notes aren't all that different from the S-series, except for the S Pen, of course. We will try to cover the most interesting and perhaps useful functions but keep in mind, the One UI software offers plenty of customizations and it's nigh impossible to go through everything.

Since the screen is one of the centerpiece features of all flagship Galaxy phones, One UI offers plenty of functionality to play around with on it. You will find a Blue light filter, Night mode (a relatively new feature to Galaxy phones), screen calibration and Edge screen, but on the small Note10 here there's no screen resolution adjustment - it's just the native 1080p.

Edge panels is a well-known long-standing feature that gives you quick access to apps, actions, tools, etc. with a single swipe from the side. You can choose which side the handle is located on, as well as adjust its position along the height of the phone. In the Edge screen sub-menu, you will also find Edge lighting - it lights up the edge of the screen for notifications and as you've probably guessed, there are tons of options and styles to choose from.

For a while now, and quite incomprehensibly, the Always-on display hasn't been in the Display menu - Samsung tucked it away in the Lock screen section instead, with a shortcut to it on the bottom of the Display menu. There are different styles and behaviors to play around with, as well as the option to have it actually always on, appear as scheduled, or only show up when you tap the screen.

It's especially useful when the phone is lying on your desk and you either need to check for notifications or you want to unlock the phone without guessing where exactly the fingerprint is. Since the scanner is pretty small and takes a small surface of the screen, you need to be pretty accurate when placing your finger.

And while we are on the subject, let's discuss the fingerprint reader performance. It's a mixed-bag experience, where it can be fast and work every time, or feel sluggish and get multiple false readings in a row.

We've discovered that since it's a smallish sensor you need to get your finger placement pretty much just right and then it works like a charm. But that's really the case if you're deliberately testing the speed and being careful.

In real-life use, it's more of a 50-50 chance you'd unlock on the first try. And even then, the unlock animation could feel like it's taking longer than ideal. Overall, competitors generally offer superior unlock experience with their under-display readers.

The lift-to-wake function, especially when lifting it off the table as opposed to out of a pocket, doesn't work very reliably either, so if you're not using the Always-on feature, there are a lot of times when you have to guess where the sensor is.

After using the phone for a while, you start to get used to the sensor positioning and no visual hints will be needed anymore. The overall placement of the reader is quite convenient as well - it's easy to reach and comes naturally from the get-go. 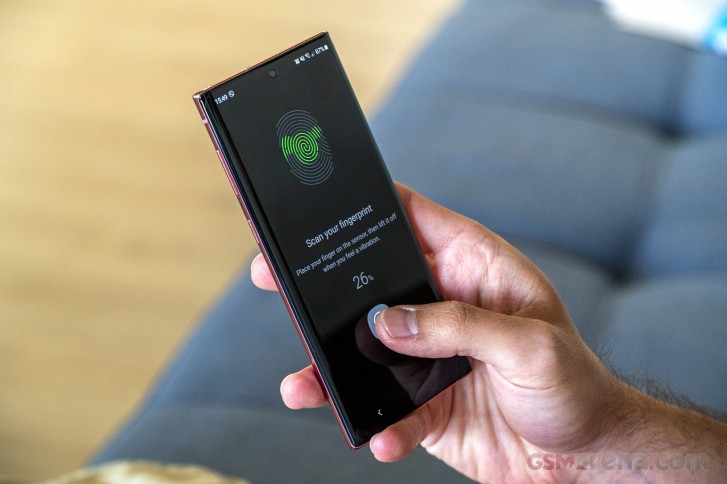 If you are a privacy freak, there's an option in the Fingerprint settings menu just for you. You can turn off the Faster recognition toggle - you will be trading better security with more readings for speed with less readings.

As an alternative to fingerprint recognition, the phone also supports face unlock. It's quite fast and consistent but since it uses only the front-facing camera and software to read your face, it's not as secure as on the Mate 20 Pro or the iPhones, for example.

Moving over to the Device care section, we find information and preferences about the battery, storage, memory and security. You are greeted with a big Optimize button that clears background apps and scans for suspicious behavior - that is if you don't trust Android and Google Play Portect to do their job.

The three dots menu in the upper right corner reveals several other options like Auto optimization. You can set a schedule and the phone will run the optimization process automatically. There's also an App issue history sub-menu that helps you keep track of the problematic apps.

Tapping on the Battery icon will take you to the familiar battery menu where you can see what drains the battery the most - apps, screen, other hardware, etc. There are also a couple of power modes - High performance, Optimized, Medium power-saving and Maximum power saving. If don't want to be bothered with switching power modes back and forth, just toggle the Adaptive power-saving feature and let the system decide which power mode is the best depending on your usage patterns. We assume it will turn on High performance while you are playing games and switch it back to one of the other more efficient modes to save up some juice, especially when the battery is low.

The three-dot icon in the upper-right corner of the screen will take you deeper into the battery customization options. There's the app power management and automatic optimization when you aren't using the phone as much. As usual, Samsung has provided the option to opt-out of the fast charging feature. It's set to on by default but if you don't need fast charging, you can turn it off. Oh, and if you're looking to enable the battery percentage indicator in the status bar, it's not here - you need to go to the Status bar settings from the three-dot menu in the expanded quick toggles. Urgh.

Since the dedicated Bixby button is gone, the power key takes over here - Side key Samsung calls it. The good news is that you can assign the double press to launch the camera (as has been the case with Samsungs since forever) or open an app while the "press and hold" action is limited to waking Bixby and powering off the device. Effectively, you can disable Bixby altogether by setting the double press to launch the camera and the long press to power off the phone.

If you are not a fan of the One UI animations, you can cut off some of them and potentially speed up the navigation through menus. Screen recorder and screenshot settings are available as well. And we suggest taking the time to get familiar with all the motions and gestures available. The palm swipe to capture a screenshot is a fun gesture in case you find the standard volume key + power button combination harder to execute now that the keys are on the same side.

If you've used the S Pen on previous Notes, you'd find yourself in a familiar place. As always, there are a couple of new features that come with the new Note. The first that spring to mind are the new camera gestures and we talk about them in detail in our camera section of the review. 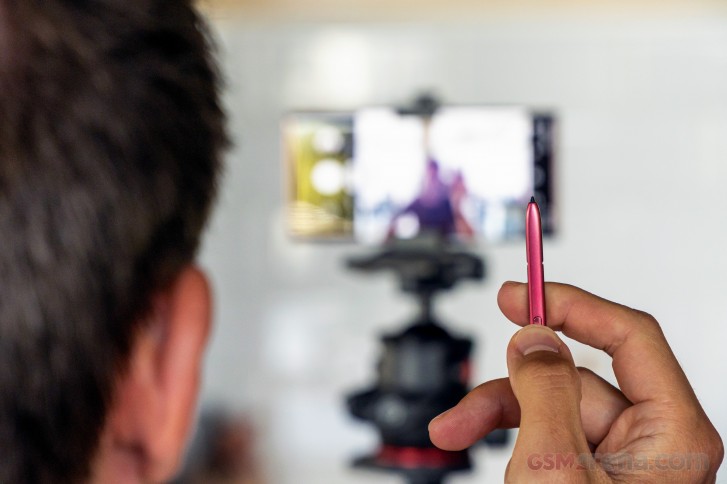 Outside of the camera, one of the main features Samsung wants to promote is AR doodle - it uses the camera to find a face on which you can then and the software then keeps track of it even when it exits the frame and returns back. It's a fun feature to play around with but not necessarily a useful one. The Note10+ uses the ToF sensor for improved depth mapping in this process, but it's not like missing it on the Note10 is critical, really.

The hand-written text recognition, however, is something to behold. Samsung specifically boasted about the new algorithm recognition and we can see why. We're not exactly calligraphers around here, but the software is able to pick up our scribbling quite accurately. It's also easier to access, not like in the Note9 where you'd have to dig a bit deeper to summon it.

A new Write on calendar feature has made an appearance but we couldn't figure out a use case for it. It does exactly what the name says - you write on top of the calendar and that's pretty much it.