After the innovative side-curve on the Galaxy Note Edge, Samsung put its main focus on the Galaxy S line and the Note5 was looked over. This year, the Note is the one getting special treatment and it now comes with a dual curved screen. If rumors are to be believed, Samsung wants to go curved-only with its flagships going forward, so let's gaze into the (potential) future.

The matrix still measures 5.7" in diagonal, but its left and right sides are curled down. This, essentially, reserves the sides of the screen for special functions (we explore them on the next page - yes, we filled half a page with just the features based on the screen curve).

The Galaxy Note7 is the first phone to wear Gorilla Glass 5. Corning claims that the glass will survive "shoulder-height drops" (1.6m/5" 3in) 80% of the time. So not "shatterproof" but 4x better than other kinds of glass.

Behind it all, sits Samsung's flagship AMOLED matrix with QHD (1,440 x 2,560px) resolution though it seems some tweaking has occurred since the S7 edge.

The screen reaches a higher maximal brightness of around 430nits when in manual mode. Auto mode (at its discretion) can drive the brightness even higher; 650nits is the highest we observed.

Basic can look a bit plain to the casual users and unless you can name one color profile, we recommend you stick to one of the other three options.

Adaptive display is the default, and it tweaks the settings based on screen content. The Red channel gets oversaturated and pushes the max deltaE to 12.3. The Green channel is off too and the white balance shifts slightly towards blue (a common trick to make white appear extra white).

AMOLED photo is the next step, which oversaturates colors and increases contrast, but to a lesser degree than Adaptive display. Then AMOLED Cinema pushes things even closer to the accurate Basic mode. It's a trade-off - these modes are fairly accurate, but still make the image pop.

There's no color shift when you tilt the display, not even on the curved sides (they do reflect light from a different angle, but the color remains the same). We've seen some 2.5D displays (flat screen, curved glass on top) create some prismatic effects, but there's none of that here (an advantage of the curved display).

The Samsung Galaxy Note7 is one of the first mobile devices to support HDR video. It's not HDR like in the camera. This one has 10-bit color instead of 8-bit, that's four times the number of shades. This prevents color banding and enables detailed scenes that feature both very bright and very dark areas.

HDR video content is fairly limited at the moment, but Amazon Video and Netflix do have some. Also, the Xbox One S launched recently with HDR video as one of its key selling points, which should help drive demand. 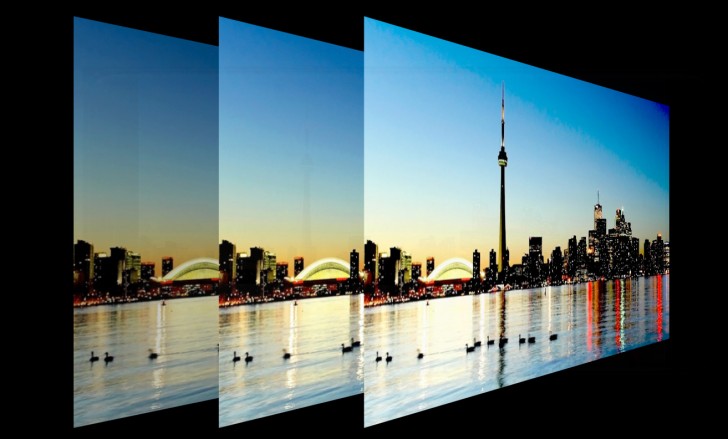 The Note7 brings another picture-enhancing toggle - Video Enhancer. This one works in all video apps (even third-party ones) and brightens the image and makes colors more vivid (it simulates HDR video). Note that this option also enhances audio.

Another novelty is the Blue light filter, which we've seen it before on other Androids before (but is new to the Galaxy line). The idea is that natural light is blue during the day and fades to yellow in the evening. Looking at blue light, even from a small screen, can mess up your body's internal clock and make it think it's daytime. The filter can be toggled manually, but it's best scheduled to turn on in the evening and turn off at dawn.

Connectivity, an ode to USB Type-C

The Galaxy Note7 is the first Samsung phone with a reversible USB Type-C port. Even so, the company is unwilling to break away from USB 2.0 and has included two adapters - one Type-C to full-size USB 2.0 and one to microUSB 2.0. 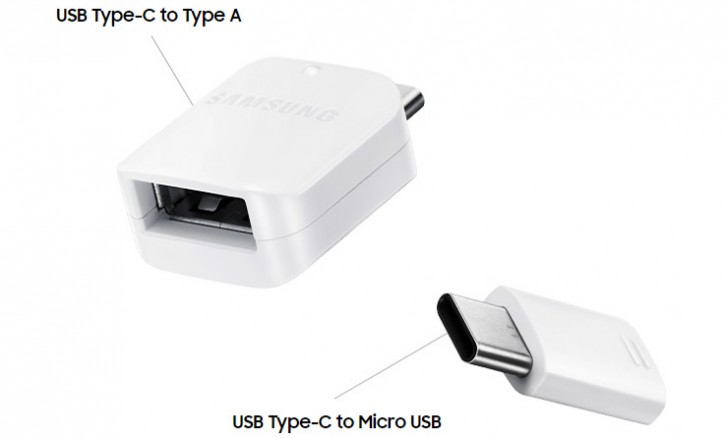 The big adapter lets you connect any USB accessory with the ubiquitous port. You can even connect your old phone and have the Galaxy NOte7 transfer all information when you set it up.

The microUSB adapter is more for convenience - it allows you to use a regular microUSB cable or charger with the Note 7. It doesn't have USB host functionality unlike thebigger adapter.

Note that both adapters work at (relatively) slow USB 2.0 speeds (even the big one).

Unlike older USB standards, Type-C has an official TV-out standard - DisplayPort. So you are only a cable away from hooking the Note7 to an HDMI port on your TV or external monitor. But in the times of wireless casting, this option is starting to look well over its due date.

The wired connection can also be used in your car as long as the head unit supports MirrorLink. This standard mirrors the phone's screen (including touch input) onto the head unit. From the settings, you'll easily find an alternative launcher with big, easy to hit icons (the CarmodeStub we saw on the Galaxy Note5 too).

Wired connections aside, the Samsung Galaxy Note7 offers blazing wireless Internet speeds. It varies by region, but you may get LTE Cat. 12 (or Cat. 10 or 9). Honestly, your carrier's network is probably not even as fast as needed to support it.

Wi-Fi is fast too - with 2x2 MIMO and 802.11ac it can reach speeds up to 620Mbps. Again, it may turn out that your router is slowing down the Note. The latest Bluetooth 4.2 with LE and ANT+ are available as well. Global positioning is handled by GPS, GLONASS, and BeiDou.

Samsung Pay using either NFC based contactless payment terminals NFC or by emulating old-school MST technology - essentially the older cards, which only rely on magnetic strips (more common in the US than Europe).

Samsung has designed a new Power saving system too, which is powerful and flexible. It has two modes - Mid and Max - and each shows an estimate on how long the phone will last.

They are fully customizable. You can limit brightness and performance, also prevent background Internet usage (both mobile data and Wi-Fi). You can also reduce the resolution to 1080p or even 720p to reduce the load on the chipset. This way you can have the best of both worlds - the sharpness of a QHD screen and the power efficiency of a low-res screen.

We're very impressed by Samsung's new power saving features. They have good defaults, but their customizability gives Power users the chance to optimize battery life completely. Even third-party tools that require root access aren't this extensive in their feature set and they certainly don't come with such a nice and easy to understand interface.

Note that we tried an old fast charger, one with a microUSB 2.0 cable, and the small Type-C to microUSB 2.0 adapter from Galaxy Note7's box didn't interfere with its work in any way.

Even without resorting to power saving features, the Galaxy Note7 is a great performer. We measured 90h Endurance for the Exynos 8890 version and 81h for the Snapdragon 820 one (the two S7 edge models showed similar scores). The Always On screen cuts off about 30% of the total Endurance time on both versions.

Note that Always On adjusts its brightness based on ambient light, so it will use a lot less power at night than it will sitting on your desk. Also, if you want to save power while you're sleeping, you can enable Night clock, which displays a tiny window with the time and disables the big AOD view.

The scores are slightly worse than what the Galaxy S7 edge managed. The bigger screen is probably to blame, the 100mAh difference in battery size couldn't have changed much.

The Exynos model proves more efficient, beating the Snapdragon model by about an hour and a half in the Web and Video tests and by three hours in the Talk time test.

We measured the charging speed of the Galaxy Note7 using the provided Adaptive Fast charger (9V x 1.67A = 15W). Starting with a flat battery, the Note7 had 38% charge after half an hour (the phone was on but idling, Always On screen enabled). It took a total of 1 hour and 35 minutes to reach 100% charge, fast indeed.