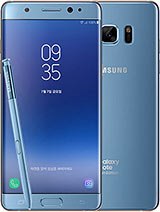 Was a great phone. I kind of miss it. The original FE.

Iphoneking, 26 Oct 2021Bruh I've got this phone see what happened, this scree... moreSounds like user error

Minus the edge display, I love this design. Dedicated Navigation buttons, fingerprint sensor on the button, expandable storage and headphone jack, all of the sensors are on the top along with the camera so you can tape it for privacy. The sensors are also more accurate as they are actual sensors and not just "virtual" or emulated sensors.

A 16:9 display that has no curved corners. That is my favorite part about this phone. It's even 1440p!

Iphoneking, 26 Oct 2021Bruh I've got this phone see what happened, this scree... moreI mean it is normal that you would have bias to an android phone as you are apparently the GSMArena 'iPhoneKing'. We'll leave it at that.

Anonymous, 12 Jan 2022no way,dont even try, you will get life sentence... what... moreWhat a stupid thought that it can't be taken on a flight lmao - It's not note 7 it's a version that went through wayyyyyyyyy more thorough testing than the original note 7 did.

Amazing phone. The S7 Line is my favorite and personally the best line of Samsung phones ever produced. These are quite hard to find but not impossible. Some popup on eBay now and then. And this is one you can actually carry in your pockets and actually take on flights safley.

what a stupid question

Can these be taken on a plane? Just asking

A user, 30 Sep 2021Older galaxy phones are honestly better because they still ... moreBruh I've got this phone see what happened, this screen's phone is hard to touch and now the charging is broken😂😭😭😭 trash

It's junk phones, chaotic screens and chaotic charges and the severity of Samsung selling phones like this

The download speed ain’t as advertised, even my old Sony phones can do better than this crappy phone.

Older galaxy phones are honestly better because they still have a home button and most features that newer galaxy have, my phone is a note FE too and i will not upgrade it to a new one until who knows if samsung ever release a phone like iphone SE 2020 with a brain of a galaxy s20 and a look of a note 7

I got the August patch about 60MB in size.

Today's marked owned for 4 years of this device (exynos). Now it became my 2nd phone. The screen has no burn until now, but minor scratch yes coz of my little child. Bought it usd480 last time as new. Battery capacity significantly drop from 3200mah to 2510mah (4yrs of usage). Right side proximity touch sensor of the screen is dead (note 7/fe major problem). Stylus works like a charm until this date. Last updated security patch of April 2021. It is now a bit lag compared to my current S20 5G (korean). I would not recommend to buy it as a new device for this year, coz there's a lot of choices out there. My recommendation is to look out for SD865 soc, one of most stable SD around, eventhough SD888 is in the market already. If u want to buy as a 2nd phone, dont hesitate.

beruang, 29 Sep 2020I think it's way better to choice used Note 9 instead ... moreTotally agree with this decision