Once you manage to take your eyes away from the magnificent display, you'll find that the tour around the rest of the Galaxy Note hardware is a pretty short one.

Below the screen you find a couple of capacitive keys (Menu and Back) and a hardware Home button. A long press on the Menu key lets you quickly initiate a search, while a press-and-hold of the home button opens up the task manager. A quick double tap on the hardware Home key on the front brings up the Galaxy Note voice commands menu.

The Vlingo-powered voice assistant will get some more attention in the user interface chapter of the review.

Above the display, you get the usual set of hardware components – an earpiece, a proximity sensor and a front-facing camera that can be used for video-chatting or 3G video-calls.

Business as usual above the display: earpiece, front-facing camera and a proximity sensor

The left-hand side of the Samsung Galaxy Note features the volume rocker and that's not the most convenient place to have it obviously. There's almost no way to reach and comfortably press it in single-handed use. It makes sense though when holding the phone landscape: it's right under your left thumb when you're watching a video for example, or using the camera (the volume rocker doubles as a zoom lever).

The volume rocker could be more comfortable

The more important reason for having the volume keys on the left is that the right side of the smartphone is reserved for the power/lock key. It would've made little sense on the top in a device this size. On the side, it's fairly easy to reach when you're holding the phone with one hand.

Pressing the power key isn’t the easiest task either

The 3.5mm audio jack is on top of the Galaxy Note. The Note's secondary microphone (enabling stereo sound recording in videos and noise-suppression in calls ) is also located here.

The 3.5mm audio jack has a microphone to keep it company on top

The other microphone is at the bottom, next to the microUSB port. The connectivity port is used for both charging and data transfers.

The 8 megapixel camera lens has the LED flash by its side on the back of the Samsung Galaxy Note. The loudspeaker is here too, near the bottom left corner.

The 8 megapixel camera, the LED flash and the loudspeaker grill is what you see at the back

The S Pen compartment is in the bottom right corner. The stylus comes with a key that allowed Samsung to implement some clever gestures, but those will get their deserved attention in the next part of the review. What we’d like to mention here is that the S Pen itself is rather hard to pull out. Maybe it's better that way than being too loose and likely to fall off and get lost.

Opening the battery cover reveals the 2500 mAh battery, which is powerful enough to get the Galaxy Note through several days of moderate use on a single charge. However, a screen that big certainly takes its toll, so don’t expect miracles.

The Samsung Galaxy Note got a battery rating of 39 in our recently introduced battery test. You can expect 39 hours between charges with an hour of 3G calls, and hour of video playback and an hour of web browsing each day. That’s better than what we are used to seeing from modern-day smartphones. 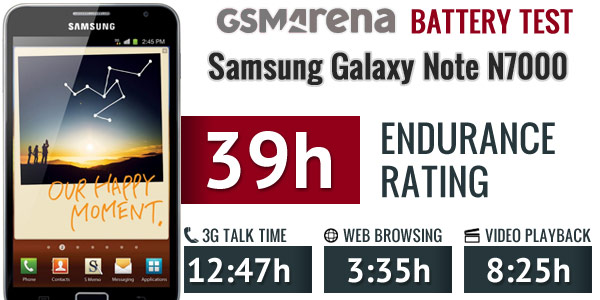 Next to the battery are the non-hot-swappable microSD card slot and SIM card compartment. It’s a pity that you aren’t able to change microSD cards with the Galaxy Note still running and with so much available space, we feel Samsung could have done better.

The microSD card slot is non-hot-swappable

The overall ergonomics of the Samsung Galaxy Note are a story of two parts. If you look at it and see a compact tablet, you'll love the big and super crisp screen. One-handed operation is awkward - at least at first - but certainly not impossible.

The Samsung Galaxy Note isn’t the easiest device to handle, but it’s not impossible to get used to

The hardware keys are often out of reach but in return, you get plenty of HD screen estate to enjoy your pictures, videos and favorite websites.

The simple styling and all-plastic build are the right thing for this phone. We have no qualms with the build quality. The massive screen and slim profile make it look delicate but there's nothing to worry in terms of daily wear and tear.

The only thing we're not sure about is actually using the thing as a phone. It could look a bit weird and embarrassing. But hey, what are headphones for?