Samsung Galaxy S11 is coming with a 4,500mAh battery

Last week we stumbled upon a battery certification for the upcoming Galaxy S11+ and now we got some news on the smaller S11 which also got its battery certified by SafetyKorea. It appears Samsung is sticking to its new larger cell approach and will outfit the S11 with a 4,500 mAh battery. The S11’s battery cell comes with the EB-BG985ABY model number which falls in line with the device’s own SM-G985 model number. We also get an image of the actual battery and although it's not the best quality, we can see the minimal capacity comes in at 4,370 mAh while the typical value is listed at 4,500mAh. These values fall in line with the Galaxy Note10+ and are a notable improvement over the S10 and its 3,400 mAh battery. 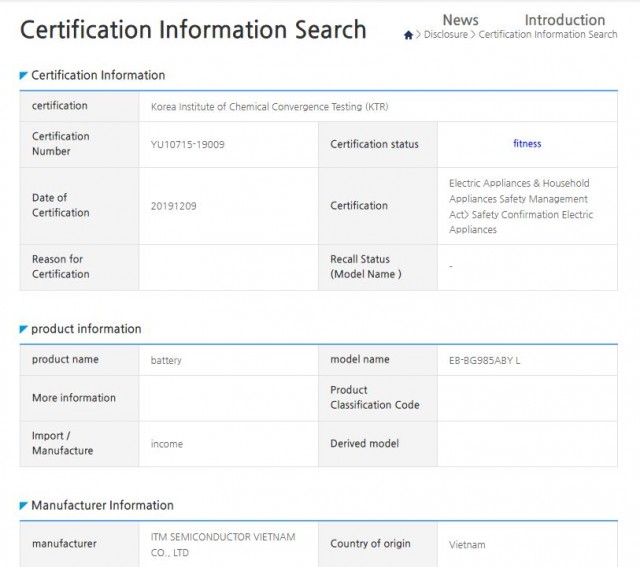 As with the S11+, the S11 will need all the power it can get as it's rumored to come with a taxing 6.7-inch Dynamic AMOLED display with QHD+ resolution and 120Hz refresh rate. In addition, we should be getting the Snapdragon 865/Exynos 9830 chipset depending on the region, paired with 8 GB LPDDR5 RAM and up to 512GB UFS 3.0 storage. Another rumored new addition is a new 108MP main camera sensor.

Samsung Galaxy S11+ may come with a custom 108MP sensor

The Samsung Galaxy S11e will have 5G connectivity and fast charging

The only thing I hope for is that this means incredible results in 60hz mode. I really couldn't care less about high refresh screens on battery powered devices and otherwise the panel and the SD 865 chip are exactly as efficient as their predecessor,...