The Samsung Galaxy S22 Ultra, which could be called the Galaxy S22 Note, was spotted on Geekbench last month with model designation SM-S908B, Exynos 2200 SoC, and 8GB RAM. Now the Snapdragon 8 Gen 1-powered variant has also appeared on the benchmark database, bearing model code SM-S908N and SM-S908U. The former is likely a Korean unit, and the latter could be a US variant.

The SM-S908N and SM-S908U run Android 12, but the former has 10GB of RAM onboard, and the latter has 8GB. A tipster recently claimed the Galaxy S22 Ultra will have two RAM options - 12GB and 16GB - so we'll have to wait for more sources to corroborate this bit to be sure. 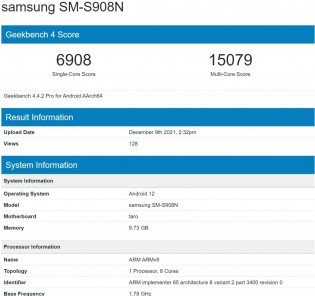 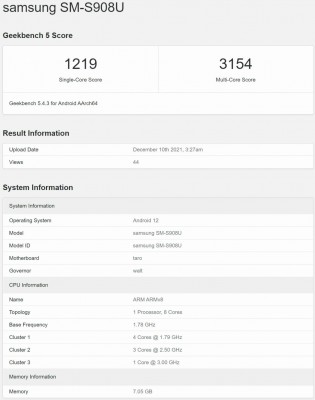 However, there isn't too much of a difference between the multi-core performance of the two devices since Exynos 2200-powered S22 Ultra clocked 3,167 points, whereas the Snapdragon 8 Gen 1 variant scored 3,154 points. It's also worth mentioning that we are looking at prototypes, so we'll reserve our judgment until we test the retail version ourselves.

There's no word from Samsung about the Galaxy S22 series yet, but rumors claim the lineup will be unveiled on February 8, 2022 at a Galaxy Unpacked event, with sales kicking off 10 days later. However, Samsung will start accepting pre-orders for the S22 series soon after the event concludes.

Who needs a phone which has powerful gpu and cpu but doesn't has the feature to let you use it hehehe...most of the ios games are at 60 while android's redmagic 6 is all the way over 165hz

All people sees, is a same test and look at 3dmark GPU scores