During its MWC presentation this year Samsung put a huge emphasis on the exquisite display unit in its latest Galaxy S6 flagship. And, as it turns out, this is more than just a promotional stunt, the new Galaxy has a gorgeous QHD Super AMOLED panel, which might just turn out to be the industry's best.

But there is also another contender - the Galaxy Note 4. Both phones were sent to DisplayMate for testing and they are having a hard time crowning a definitive winner among the two.

Both the Galaxy S6 and S6 edge made it to the company's testing grounds and were put through rigorous tests. Although the phones differ in form factor, their display units are identical - 5.1-inch panel, with a QHD resolution of 2560 x 1440 pixels and a ppi rating of 577. The only difference is the slight curve in one of the models, so both were tested just in case. 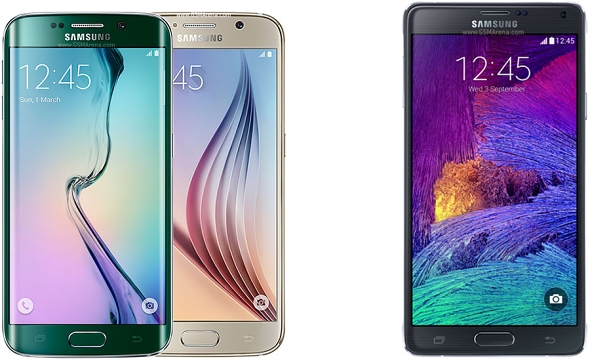 It turns out that the panel in the Galaxy Note 4 and the S6 are very close in terms of overall performance. Even though the screen on the new Samsung flagship has been scaled down in size by about 20% compared to the Note 4, it has maintained its amazing picture quality and is battling the phablet for the "Best Performing Smartphone Display" title. Here is what DisplayMate had to say on the matter:

As it turns out, Samsung has a lot to boast about its current device lineup. Naturally, the best in class title wouldn’t be complete without a shootout with the iPhone 6 and 6 Plus, which currently hold the title "Best Mobile LCD Displays" and according to DisplayMate, Samsung leaves both of them in the dust as well.

We recently evaluated and rated the iPhone 6 and 6 Plus as the current Best Mobile LCD Displays, while the Galaxy S6 and Galaxy Note 4 are the current Best Mobile OLED Displays. All are impressive and excellent displays with great state-of-the-art display technology. However, OLED displays have been advancing at a relentless and fast pace with a constant series of systematic and strategic improvements, while LCDs have been coasting on their laurels for years. So although OLEDs started from behind in 2010 they have now pulled ahead on performance and innovation based on the Lab test and measurement results reported here. To get back in the game and become more competitive, LCDs will need to adopt Quantum Dots and Dynamic Color Management.

The incredibly thorough and detailed test documentation, results and final verdicts can be found at the source link, along with quite comprehensive comparison tables. So you can really dig deep into the question. But one thing is for sure, Mr. JK Shin was definitely not lying when he said that the Galaxy S6 and S6 edge are "the most advanced smartphones in the world". At least for now, that is.

Samsung US deal: phones with cracked screens pay out as well as those in good condition

One UI Watch beta program opens for Galaxy Watch4, Watch4 Classic in the US

Btw future is about amoleds

So you have no clue what you are talking about in other words... To say Amoled has more accurate colors is not true? Obviously the results speak the truth. And color accuracy is dependent on calibration. And these world leading Amoled displa...

Meanwhile when while browsing the Note 4 matches and beats most other devices. Even those of 5 1080p variety. On top of having much better efficiency for everything else.