Samsung revamped its camera UI and software. The old S Voice shortcut - double tapping the Home key - now launches the camera and there's almost no delay. No more missed shots because the camera app was loading.

Unlike the Galaxy Note Edge, this time the camera controls are identical to the ones on a flat screen. That means the shutter is in the middle of the right column of the screen instead of on the curved part of the display.

Shooting modes are still the focus, but manual controls are available on-screen that you can tune and get a live feedback. That's the Pro mode which offers focus control, ISO, exposure compensation and white balance adjustments. You can save settings you use often as presets.

The main camera, of course, has HDR but Samsung has added the option for HDR selfies too. This will improve photos where the sun is behind your back. There's an auto mode that will save you the trouble of activating and disabling the mode manually.

A new mode is Virtual shot. Basically, you move the phone around while keeping your subject centered. After that the phone uses its accelerometers to show you different angles of the subject as you rotate the phone. This is available on both the main and the front-facing camera so you can take a Virtual shot of your face.

Those aren't the only shooting modes, in fact the Samsung Galaxy S6 edge camera lets you download new ones. There are only two available at the moment, the familiar Sound & shot and Sports shot (you have to download those manually if you use them).

There's tracking autofocus available - it keeps the focus point on a subject even if it moves around. This makes sure most of your photos will be in focus.

First up, a photo we took just outside the Palau Nacional on Montjuic. Both phones chose different focus points, but we picked a representative part of the image. It was a nice and sunny day so both phones shot at ISO 40, though the Galaxy S6 edge typically went for faster shutter speeds thanks to its wider aperture that lets more light in.

Both phones achieved captured roughly the same amount of detail. The Galaxy S6 edge photos have less noise in them. The new phone also applies less saturation to colors, though they can now appear a little muted if you are used to Samsung's usual lively colors. 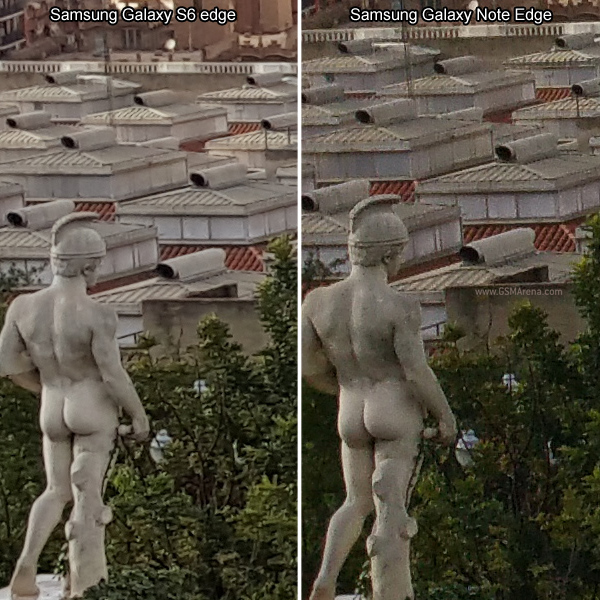 Another photo was taken just outside the Fira de Barcelona (the ex-MWC venue), looking back towards Palau Nacional. It's the same story in terms of settings ISO 40 and faster shutter speed for the Samsung Galaxy S6 edge. From this photo it's pretty clear that S6 edge camera has a wider angle lens and fits more into the frame.

This leaves fewer pixels for each object of the scene and gives the Galaxy Note Edge a leg up. We confirm the findings from the previous photo - less noise and color saturation for the S6 edge.

Looking at trees, the new flagship shows an advantage in processing. The Note Edge often renders foliage as if drawn with a brush and paints, a side-effect of the noise reduction (and there's still visible noise!). Trees look much more natural in Galaxy S6 edge photos. 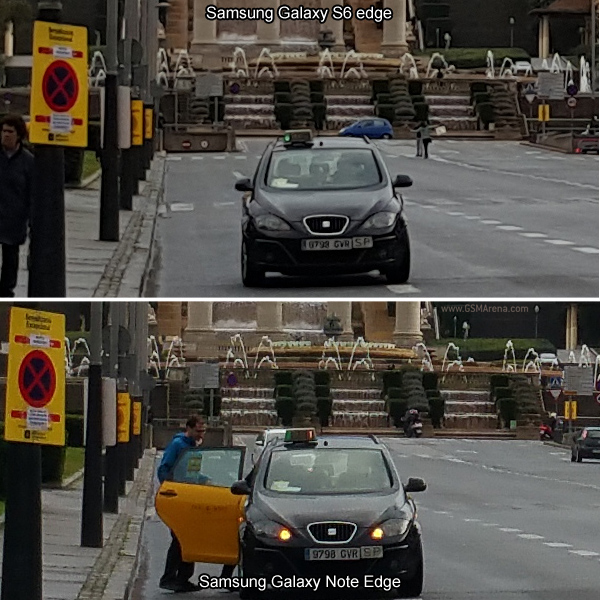 Here are the full resolution photos we used:

We snapped a few macro shots and were impressed by how well the Samsung Galaxy S6 edge creates a bokeh effect. Out of focus elements look softly blurred, while the Galaxy Note Edge camera create a mix of blur and smudging from the noise reduction.

We also snuck in a photo to compare the Galaxy S6 edge with the Apple iPhone 6. Those two are difficult to compare - 16MP vs. 8MP and quite different aspect ratios. We looked at the photos as they are, but also tried upscaling the iPhone 6 photo to 16MP and then downscaling the Samsung photo to 8MP.

The iPhone 6 does an admirable job, but its camera resolution is starting to show its age. The Galaxy S6 edge captured more of the leaf texture, the wrinkles in the dried petal. The difference is perhaps most visible in the moss. In the Samsung photo each strand of the moss is separate while on the iPhone's photo they start to merge visually. 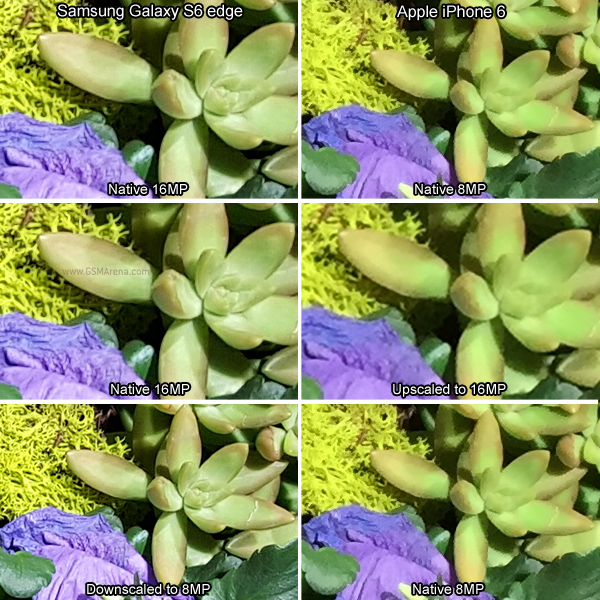 Here are the untouched photos:

As an overall impression, the Galaxy S6 edge produces beautiful photos, especially with the smooth blur it introduces in out of focus areas. We noticed that it prefers to keep the focus point close by, things in the distance typically start to soften - but that may as well be the pre-production unit we used for the test. The reduced noise compared to the Galaxy Note Edge is a good improvement, but owners of the curved screen phablet should remain happy with their camera.

Lol s8 are avail. Now and the note 8 is coming

Why nobody talking about performance compare s6 vs n edge