As we get closer to its rumored August 12 unveiling date, we're starting to see more and more of the upcoming Samsung Galaxy S6 edge+. This bigger version of the S6 edge is probably going to serve as the successor to last year's Galaxy Note Edge.

The S6 edge has a 5.1-inch touchscreen, and its bigger brother has been rumored to get a 5.7-inch panel. This information seems to fit with the overall size difference between the two, which you can witness in these shots.

Unfortunately we're still lacking full frontal views here, or even one showcasing the S6 edge+'s back, but we're probably going to get there before the official announcement at this rate. 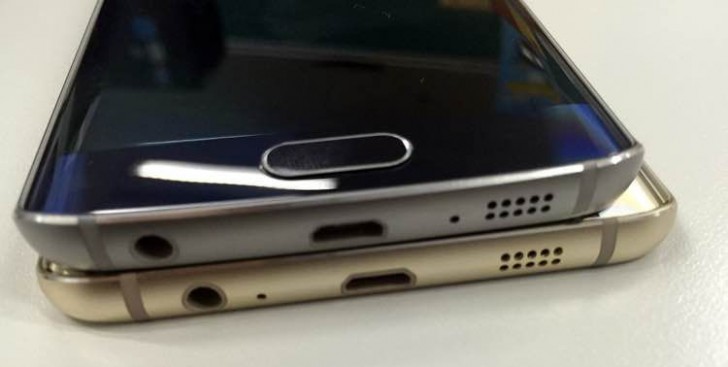 Like its smaller sibling, the S6 edge+ is said to sport a curved screen on both sides. It will be powered by a Qualcomm Snapdragon 808 chipset with a hexa-core CPU. It will have 32GB of storage, a 16 MP rear camera with OIS, a 5 MP front-facing snapper, and a 3,000 mAh battery. It should launch running Android 5.1 Lollipop.

In terms of design, as is obvious from the pictures the S6 edge+ is almost entirely just a bigger version of the S6 edge, with the same general lines. There are minor differences, though, one being the placement of the microphones both on the top side and on the bottom, along with the lack of an infrared blaster.

Neither Apple nor Samsung invented nor coined the word 'Plus'. Not any of the phone makers did. But Samsung wasn't the first to use Plus on phones (repeat 'phones', before smartphones)

i have the s6 edge i like it very much and got almost no problems only the RAM bug i hope samsung will fix it soon cause it is really annoying if i understand it right there will be almost no differences between the s6 edge and the s6 edge+ only...