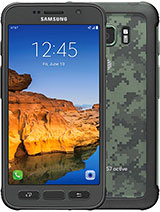 A very cool phone! I'm glad I finally have one

Such a great phone in terms of durability. Performance is okay for daily tasks but can be slow at times, but definitely still beats many modern mid range smartphones. Unfortunately, my unit is defective as recently it developed a fault where it keeps crashing and boot looping and now it's at a point where it won't even boot to the OS after a system reflash. A shame really because this phone is great but so uncommon and now I can't find a motherboard for it anywhere, and is technically bricked.

Dem, 31 May 2022Its 2022 and still it. My S8+ died due to flood but not my ... moreIncredible durability. I got a used S7 Active from a relative to use for emergency when my phone stopped working. I thought it would be temporary for a week or so until buying a new device but now have been using it for over a year and no plan to change in the near future. Dropped occasionally indoors and outdoors and the original case protects it well. It does heat up when too many apps open, but the original battery still lasts for almost a day.

Its 2022 and still it. My S8+ died due to flood but not my S7active, I think its more durable and reliable...only issue is that it heat up when multitasking but on regular lite use you can barely feel it but I guess it heats up because its quite hot in our area esp. during summer. S7active best phone I ever had! Wish Samsung would make an S22 active

I have the galaxy s 7 active. What an amazing brilliant durable phone, I've had it 5 years and its been dropped numerous times no damage. The puppy (jack russell) got it found it out in the yard. Thought its done but nope still working no problems. One tooth mark in case. This phone is strong and reliable.

Anonymous, 12 Aug 2021the s7 active is better than the s7 and im not sure what th... moreI have the active version and my wife had the regular version. The active is more durable and water / dust resistant than the regular however nowadays thats all built in. I had the pink line show up last year and I understand it's an end of life sign. It does go away if you press on the top bezel. I always kept mine in an Otterbox defender so it was well protected. This is a very reliable phone. we had to go back to them recently as a back up and they still held up well

I hear everyone crying about water problems. I was drunk or would not of did this but i literally threw it in my pool 4got i did it 3 hours later got it out worked fine. Hands down best phone ive ever had most my phone last 6 months ive had this 5 years its a beast

Anonymous, 06 Jan 2021Did yours have a pink line on screen can u tell me what to doYou can try putting pressure on the bezel just past the top end of the pink line and the line will go away for a while, but will ultimately return. I think mine started doing this because I carried it in my back pocked a lot even when driving, and probably warped the edge of the display, causing the line to appear. No such issue with my current S8 + Supcase.

Anonymous, 06 Jan 2021Did yours have a pink line on screen can u tell me what to doOh yeah they all get the pink lines. Mine from july 2016 has many pink lines and even green lines. Unfortunately there is no fix time to get new phone after 4 and a half years this phone has lost its buttons, cracked screen, back of phone burst open, still kinda works

Element, 27 Sep 2020This phone has supposedly the largest battery capacity I... moreHi, I have this phone model. I figured out if you go into the app store you can disable Facebook. :P

Hi
Could you please to tell me how to switch 2G to 4G on my Samsung Galaxy S7 active, am so tired to do this but still on 2g, anyone can help me to fix it?

Mark_S, 27 Apr 2020Still have mine going strong after 4 years. Android Oreo O... moreHow did you upgrade to oreo?

This phone has supposedly the largest battery capacity I've had at 4000mAh claimed. However, this phone also has by far the shortest battery life in day to day use compared to any android phone I've had. Can only leave it for a day on idle (not even opening up to check messages) and it's down to 40% consistently. This happens even when the phone has been freshly reset to factory settings.

Other makes including Huawei, Sony, Xiaomi can last 4-5 days under light usage conditions (occasionally checking and responding to any messages) with a smaller 2200mAh battery. The reported battery use statistics on the S7 Active are clearly bogus with usage meter only showing up 2 items... 5% phone idle and 3% Android System throughout the observation period, yet the phone has managed to discharge from 100% to 40%. Which process(es) were using the other 52%?

Samsung batteries at least up to S7 also seem to have a real tendency to deteriorate quickly (lose battery capacity/health), much more quickly than other phone makes.

That aside, this phone has a camera image quality that far exceeds even many dedicated point and shoot cameras. This is probably the biggest plus point of this phone, together with the water resistance.

Phone performance is passable, however really struggles with the likes of Google Maps. Unusably slow.

Also unhappy with being unable to remove Facebook spyware from my phone. How much did Facebook pay to make this a system app? I'm surprised that this arrangement is even deemed legal.

Overall, phone is OK. Camera is the best thing about this phone along with it's water resistance. Other aspects pretty mediocre.


Anonymous, 15 Jun 2020What is the minimum width of samsung galaxy S7 active? does the samsung Galaxy s7 Active has a dual SIM version?

On Aug 1/19 I bought a new Samsung Galaxy S7 Active SM-G981A $ 251.99, at bestphone4u_2016 through ebay and received it in my country Ecuador. After two months the screen was inhibited, I took it to a Samsung authorized workshop and they recommended to buy a replacement screen. In another workshop they connected it to a mouse to reset the factory program. They almost managed to activate it but ended up giving up. When I got home, I tried to activate it by repeatedly and randomly pressing the buttons and suddenly the screen was reset and I got my phone back.
A month later the battery was depleted, it turned off and the problem was repeated again. After repeating the previous operation several times, always at random, I managed to activate it again. Every time it goes off afterwards I can't activate it. In total it has happened 4 times and I have been very lucky, repeating the mentioned operation, which does not have a pattern but is done randomly. Today after having used it for 45 minutes, it got a little overheated and suddenly it turned off, I thought the battery was depleted, I put it to recharge but the screen indicated it had 50% charge, then it was inhibited for the 5th time and I am repeating the same process to reactivate it but still have not succeeded.
I think that if I have managed to reactivate the screen 4 times and it is always in perfect condition, perhaps the damage is not in it but elsewhere. Does anyone have an idea where to guide the search for a solution?
Ignoring this problem the phone is excellent, this is the reason to reactivate it for the 5th time.

What is the minimum width of samsung galaxy S7 active?

i love it, it is awesome