The Samsung Galaxy S II Plus comes with the default Jelly Bean Gallery which, as you'd imagine, has been treated to some TouchWiz flavor. It opens up in Album view, which is what we're used to seeing. Rather than the familiar stacks, the app uses a grid of photos, two on a line.

Besides Album view, photos can also be sorted by Location, Time, Person (photos with tagged faces) and Group.

When viewing a single photo, you'll find several sharing shortcuts and a delete button above the photo, while below is a line of small thumbnails of all other photos in the album. You can tap those small thumbnails to move to other images or you can just swipe sideways.

When viewing a photo with people's faces in it, the Galaxy S II Plus will try to detect them automatically (and you can manually highlight faces where it fails). Buddy photo share will use your contacts' profiles to try and recognize people automatically.

The Galaxy S II Plus employs the same TouchWiz-ed music player as the Galaxy S III. Samsung has enabled equalizer presets (including a custom one) along with the sound-enhancing SoundAlive technology, which features 7.1 channel virtualization. The company also uses SoundAlive in some of their MP3 and Android-powered media players.

The music is sorted into various categories and one of the options, called Music square, is quite similar to the SensMe feature of Sony Ericsson phones. It automatically rates a song as exciting or calm, passionate or joyful and places those tracks on a square (hence the name).

The music player benefits greatly from the TouchWiz UI

You can swipe the album art left and right to skip songs. You can also put the phone face down to mute the sound or place your palm over the screen to pause playback.

The Galaxy S II Plus player is DLNA-enabled, so you're not limited to tracks on your handset - songs on devices connected to your Wi-Fi network are as easy to get to as locally stored songs.

Samsung has put what is easily the best default video player on the Samsung Galaxy S II Plus. It offers several view modes - grid, list, folders and nearby devices (which accesses DLNA devices).

The video player on the S II Plus does feature Pop up play - it moves the video in a small floating window and you can use other apps on the phone with the video on. You can pinch-zoom the video window to adjust its size.

Samsung's video player has extensive codec support, and played almost everything we threw at it. It can play AVI (DivX and XviD), MP4 and WMV files up to 1080p resolution. The only thing we couldn't get to work was MOV files, but most devices don't come with MOV support out of box, so it's nothing major.

The video player lets you squeeze the best viewing experience out of the screen - you can adjust video brightness, Auto play next, play speed, SoundAlive and enable subtitles.

The Samsung Galaxy S II Plus made a good impression when it offered us a list of subtitles and let us pick. It scans for all subtitles, so the file doesn't have to have the same name as the video file.

The Galaxy S II Plus is equipped with an FM radio with RDS too. The interface is simple - there's a tuning dial and you can save as many as 12 stations as favorites. You can also play on the loudspeaker, but the headset is still needed as it acts as the antenna. You can record radio broadcasts as well.

The chipset switch has affected the Samsung I9105 Galaxy S II Plus audio output slighlty, btu the result is still very good.

When connected to active external amplifier the Galaxy S II Plus managed very good scores all over the field, with the only average volume levels the only thing that might make you frown.

There was some degradation when we plugged in a pair of headphones, but nothing too bad. Some distortion crept in and the stereo crosstalk worsened, but none of those will be easy to detect with the naked ear. The volume levels remained only average though, so while it's a solid overall performance it's not the best we have seen. 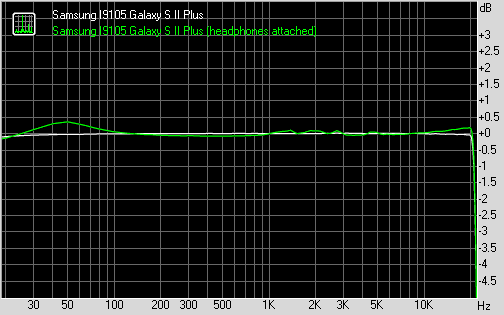 What isthe problem in battery dimm?

S2+ phone hangs a lot. I have to restart my phone many times a day.Don't buy this phone