After numerous leaks and a name change prior to entering officialdom, the slide-out QWERTY sporting Samsung Galaxy S Relay 4G has made its way to the US market, aiming for users with a heavy knack for messaging. The epically named distant relative of the legendary I9000 follows the footsteps of the Samsung Galaxy S Blaze 4G, which we took for a spin earlier this year, but adds a hardware QWERTY and updated internals to the mix. 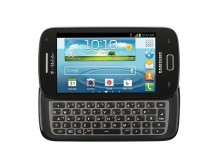 The specifications of the Samsung Galaxy S Relay 4G are a curious mix of some of the iconic tech features released in the past two years. The smartphone's 4" Super AMOLED display and 5MP main camera can be traced directly to the original Galaxy S, while its dual-core Snapdragon S4 chipset is featured in none other but the hot selling Galaxy S III.

Here goes the full list of talents, which the Samsung Galaxy S Relay 4G has to offer.

The presence of a hardware QWERTY in the Samsung Galaxy S Relay 4G is a dream come true for many users out there. It was only a few months back when we thought that this category of Android smartphones is on its way out.

As for the combination of Qualcomm Snapdragon S4 silicon and the Samsung adorned Android Ice Cream Sandwich - they have already proven to be a sweet combination in the Samsung Galaxy S III. The same goes for T-Mobile's speedy 42Mbps HSDPA.

We can't say the same about the camera and screen of the Samsung Galaxy S Relay 4G. Both units, while perfectly functional, are hardly befitting of the handset's other internals, as well as its price tag.

As always, we'll kick things off with an unboxing, followed by a design and build quality inspection.

Editorial: You might notice that this review is shorter than usual and doesn't include all of our proprietary tests. The reason is it has been prepared and written far away from our office and test lab. The Samsung Galaxy S Relay 4G for T-Mobile is a US-only phone, so it will probably never get to the shores of the Old Continent. Still, we think we've captured the essence of the phone in the same precise, informative and detailed way that's become our trademark. Enjoy the good read!

why haven't you bought a droid 4 off ebay yet

It's like you're on a missoin to save me time and money!