Samsung's upcoming Galaxy Tab A8 leaked almost in full back in September but the latest Geekbench listings suggests that the device is just around the corner. It's also here to confirm some of the hardware from the previous leak.

The Wi-Fi only version is SM-X200 while the LTE variant carries the SM-X205 model name. 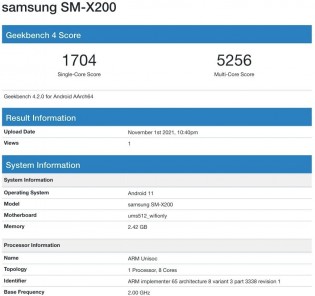 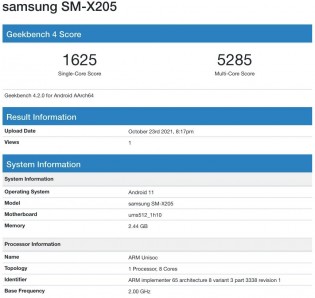 Screenshots from the Geekbench listings

As per the Geekbench listings, the Wi-Fi and the LTE variants will run Unisoc Tiger T618 chipset with two Cortex-A75 cores running at 2.0 GHz and 6x Cortex-A55 cores ticking at 1.8 GHz. The CPU is paired with Mali-G52 MP2. The tested devices have 3GB of RAM but we expect 4GB versions to also be available going up to 128GB of internal storage.

Samsung Galaxy A13 to come with a 50MP camera

Yea really what people who buy budget tablet are after.

What have they improved? At least they should have improved the camera quality.

A Samsung tablet with a Unisoc chipset? Now that's a surprise. I'm guessing that Samsung is trying to beat the Nokia T20 tablet.