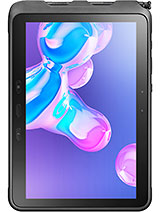 julien9416, 09 Nov 2021Does anyone knows if any replacement or equivalent is plann... moreSamsung always launches a brand new Galaxy Tab Active model every two or three years, so don't expect any new ones, including a replacement for this tablet, until next year.

Does anyone knows if any replacement or equivalent is planned for this product ?
So far, I did not find any information.

YUKI93, 06 Sep 2021While this tablet has a larger screen and a bigger battery ... moreDoesn't look like this thing's getting Android 12, unfortunately. It's not on the list of supported models.

While this tablet has a larger screen and a bigger battery than the Tab Active3, it has the same chipset as the Tab S5e. Compared to the flagship-grade Exynos 9810 chipset, the overall performance difference is immediate. Also, it was shipped with Android 9.0 Pie out of the box, so it is highly likely that Android 12 with OneUI 4.0 will be its last major OS update.

Owner of a Tab Active Pro here. It's a solid and capable device, and the upgrade to Android 11/One UI 3.1 makes it even better.

I got mine in early 2020, and it came with Android 9. My biggest pet peeves were that it lacked haptic feedback, and the intensity of the blue light filter couldn't be customized. Both were addressed in the Android 11 update, and the device even feels snappier than it did before (the opposite of iOS devices, in my experience).

Anonymous, 15 Dec 2020Regarding the offical information from samsung. The LTE ver... moreThe SM-T547 is the cellular model sold in North America; the SM-T545 in Europe (the NotebookCheck review states the model number as SM-T545 because that's a German tech site). But the difference is largely semantic; both the US and European models have the same specs, except that the cellular modem is programmed for different LTE bands.

Regarding the offical information from samsung. The LTE version is called SM-T545 not SM-T547

Most of the specs are correct. However, according to the official Samsung documentation, the wifi-only version has the model code SM-T540, not SM-T545. In addition, the processor for this tablet is the Snapdragon 670, not the 710. Finally, the battery is removable and user-replaceable.

Admins, if you could please correct these small oversights, that'd be wonderful. Thanks!

What is the actual cpu of this one? This site say SD710 while another says SD660. There's even a reviewer that stated SD845 lol.

Also note how GSMarena never updated the battery info as the thing was actually removable.

Have had this for work/home use now 2 months. Like this a lot. Works smooth on everyday use. Without protective case its not that heavy, pretty similar weight as tab A. Battery lasts long and its very easy to change. Price could be little lower, but its waterproof and shockproof with case, so in my opinion and use (lots of use outside on quite rough conditions) beats easily other tablets available.

And yes, Xiaomi still makes better and cheaper devices than Samsung, but this IS not a device FOR the AVERAGE Consumer.
Xiaomi is device for averagee czustomer. Samsung is not for average customer reason is very simple.
For example Note 10 by Samsung cost much over 1000 bucks.
Genuinely same phone like Samsung galaxy note 10 with same S pen same internals same size battery memory ram cu gpu camera etc everythign genuinely same but with Xiaomi sticker on it and the final price will be not more than 500 or maybe 600.
Average customer would buy the best device for best price.
If we put in front gate to a very large shopping mall these two devices Xiaomi will outsell samsung because for a much better price the customer gets genuinely same device.
Average customer will pay average price worth the specs.
Only clumsy people still believe a brand name means something extra, add-on, special etc.
This trend is long time history. And your mainn problem is you cant prove i am wring on this no matter what.

CptPower, 08 Oct 2019Man from Kitkat to marshmallow thats 2 updates even xiaomi ... moreI actually read your reply now, and for the most part you are right.

A telecom provider will still buy 5G Networking Equipment from Samsung even if it still costs a lot. They will buy it because they need that 5G equipment, not because they want it cheaper, or better.

CptPower, 08 Oct 2019Man from Kitkat to marshmallow thats 2 updates even xiaomi ... moreIt's not only Samsung that does the stuff with what you call "Bloatware"

Samsung will toss it's own apps on it's own devices. It's logical. If a company wants to profit (get people to use their apps) they will put their apps on their phones.

Google on their Pixel Lineup has their apps installed.
Huawei has too, Vivo, Oppo, OnePlus... they all do.
If you want to use G - Pay, you freely can use it. If you want to use Play Music instead of Samsung's music player you can at anytime.
For example, i do not prefer Google Chrome for many reasons and i use Samsung Internet.
It makes no sense for a manufacturer not to have their apps on their phone.

I don't understand your point here...


And yes, Xiaomi still makes better and cheaper devices than Samsung, but this IS not a device FOR the AVERAGE Consumer.

Aura, 06 Oct 2019I had a galaxy tablet that got updated from 4.4 kitkat all ... moreMan from Kitkat to marshmallow thats 2 updates even xiaomi does 2 updates and then their MUI they giving it even to 6-8 years old devices dunno what you thinking.

Bloatware is also not a problem on galaxy devices, you can get rid of really any of the preinstalled apps. Actualy this is not true not every app can be erased like this. And rather have no bloatware than some. Even xiaomi selling android one program phones such as Xiaomi A series.

The tablet itself is not meant for like crazy specs and such it's for someone who is working a job that needs a good protected device which this delivers. The Huawei tablet you mentioned is not as durable.
This is actualy true but IP68 and MIL-STD certification is not that expensive.
Paying 500 more for having more durable tablet is plain crap.
Know plenty of touchphones or other tablets which arent that expensive and have IP68 and MIL-STD certification.
If the price to make one is 150 and is sold for 700 it only means how greedy samsung is.

G. Tab Active pro is adding new thing only water resistant, the Chip is still weak, Color is low. A good option for me is cellular connectivity with LTE, big battery, the ram 4G

CptPower, 05 Oct 2019No its samsung. If i have google chrome why i need samsun... moreI had a galaxy tablet that got updated from 4.4 kitkat all the way to marshmallow. Samsung offers software updates for a long time depending on what you get.

Bloatware is also not a problem on galaxy devices, you can get rid of really any of the preinstalled apps.

The tablet itself is not meant for like crazy specs and such it's for someone who is working a job that needs a good protected device which this delivers. The Huawei tablet you mentioned is not as durable.