A new certification listing on China’s 3C database revealed the possible battery for Samsung’s upcoming Galaxy Tab S7. The battery is expected to come with the EB-BT875ABY model number and 7,760 mAh capacity, up from the 7,040 mAh cell on the Tab S6. The Tab S7 is expected to launch with an 11-inch AMOLED display and Snapdragon 865 chipset with 5G support.

In addition, Samsung is expected to bring a Tab S7+ with a larger 12.3-inch display. The plus-sized Tab S7 was spotted in a Bluetooth SIG certification bearing the SM-T976B model number. The listing confirms the slate’s naming as well as its Bluetooth 5.0 connectivity. According to speculation, the Tab S7+ will arrive with a 9,800mAh battery. 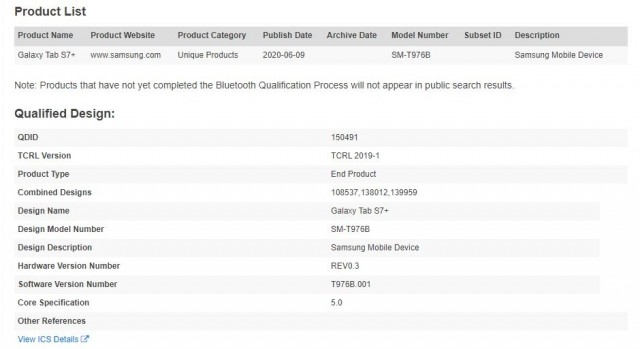 Previously the only details on the Tab S7 series revealed it will come with 5G support in Europe and the US. Both tablets are expected to launch in July, leaving plenty of time for more details to emerge.

Every month (tab S5). Also plenty of apps support the large screen natively + it runs Ubuntu (my tab anyway, does). Most tabs are useless, though, I agree. All that screen estate and almost zero uses. I would expect by mid 10s already to start becomi...

iPad is a toy. Unfortunately Tab S5 was the last pro tablet from Samsung. After it their tabs are toys too. (Tab S5 would run a real pro OS in a container, i.e. Ubuntu 16 or 18 with the more recent updates). Can't see the point of an ipad btw. I...

Major firmware upgrade depends on the tablet in question. My sister's Samsung Galaxy Tab A (8.0) 2015 was shipped with 5.0 Lollipop, but now already updated to 7.1.1 Nougat. As for the apps, I can agree with you. Most of them are just oversized from ...