While there are few design changes introduced with the standard Galaxy Watch5, the Watch5 Pro's body is totally revamped. The latter comes only in a 45mm variant, while the vanilla is offered in 40 and 44m models. We have the smallest Watch 5 for review, which is targeted at people with smaller wrists who fancy accessories in Pink Gold. Let's start with the Watch5 Pro.

As we already mentioned, the Watch5 Pro is largely different from its predecessor, the Galaxy Watch4 Classic. And the absence of the rotating bezel is just one of the differences. It has a boxier design with sharper edges, weighs a little less, and it's also a tad thinner now. We suspect that the missing ring and the titanium body are the main reasons. 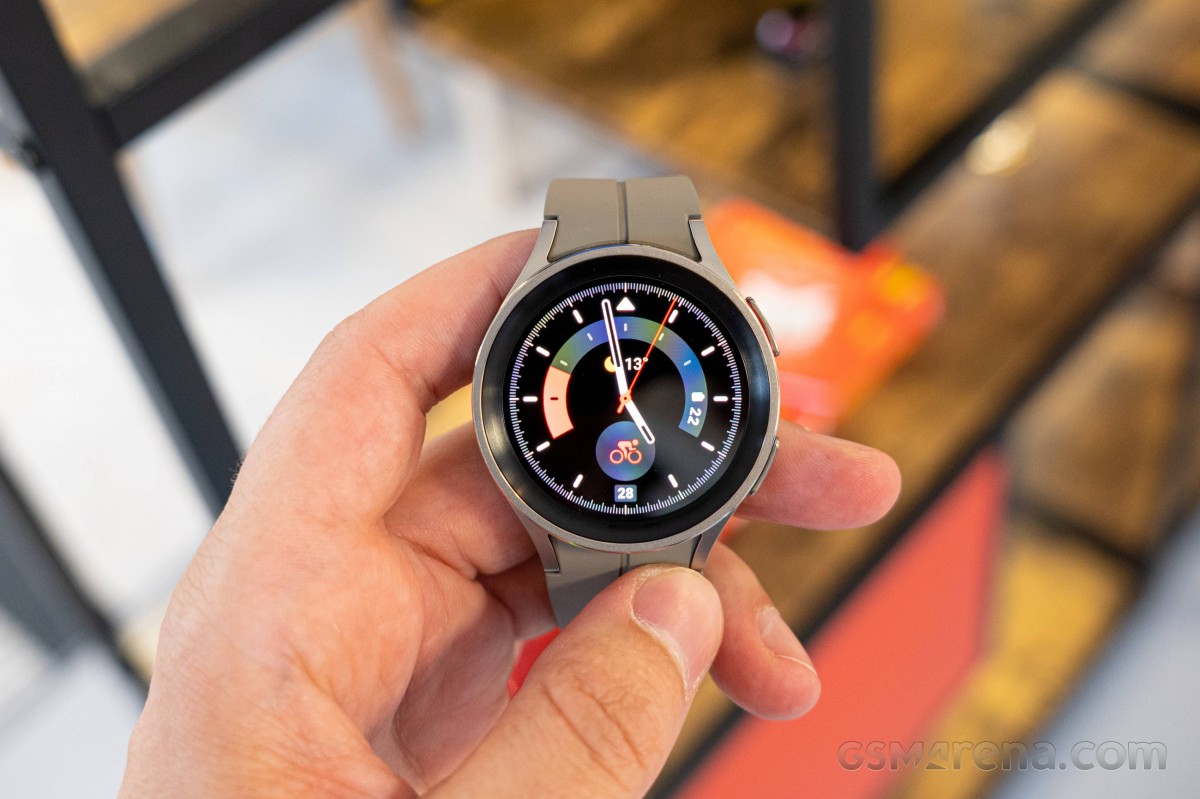 Yes, the Watch5 Pro only comes in a titanium option unlike the Watch3 series, which had a separate titanium edition. It feels nice, rather light and very premium. The back panel is still made of plastic, though, which is to be expected. There are some design and technological hurdles tied to the sensors and their accuracy. The buttons on the right side for navigation are also made of metal and have distinctive sharp edges. 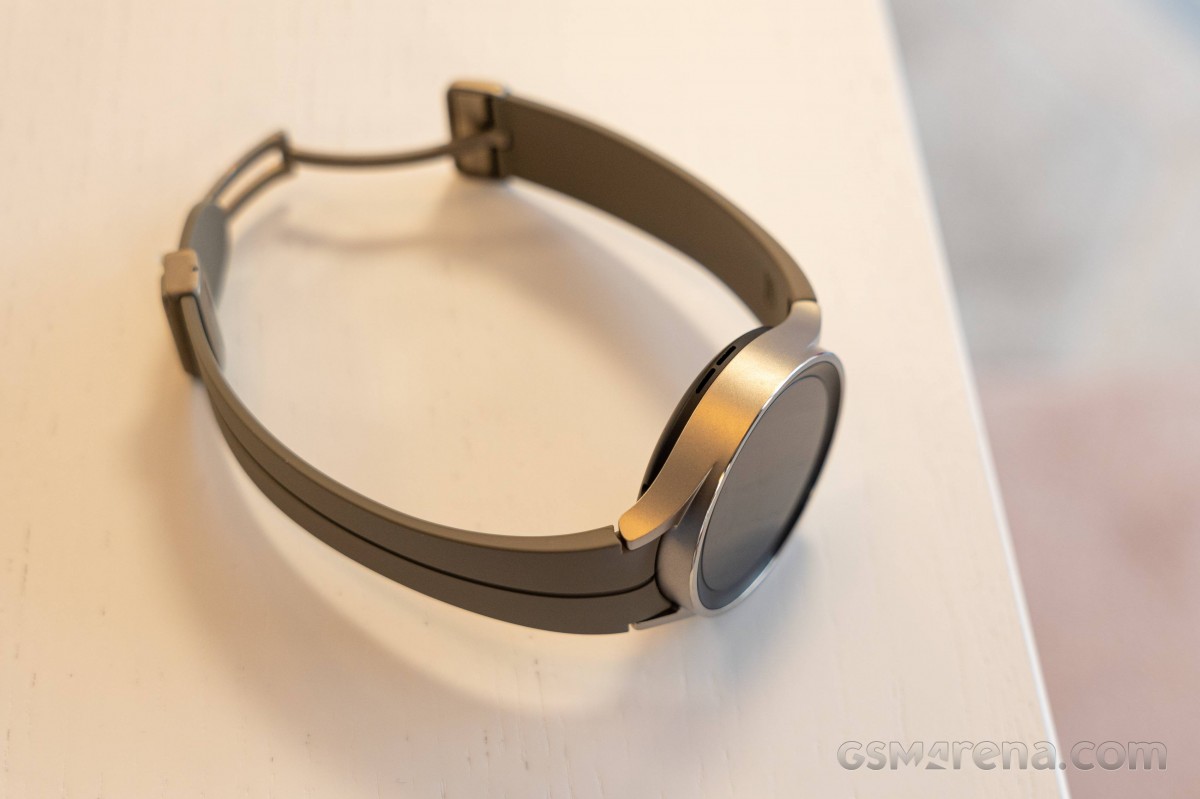 On the front, we have a 1.4-inch OLED display with a thick black bezel meeting the titanium chassis. The chassis and bezel are slightly elevated above the screen, providing a bit of protection and function simultaneously. The black bezel serves as a replacement for the rotating physical ring. But more on that later. 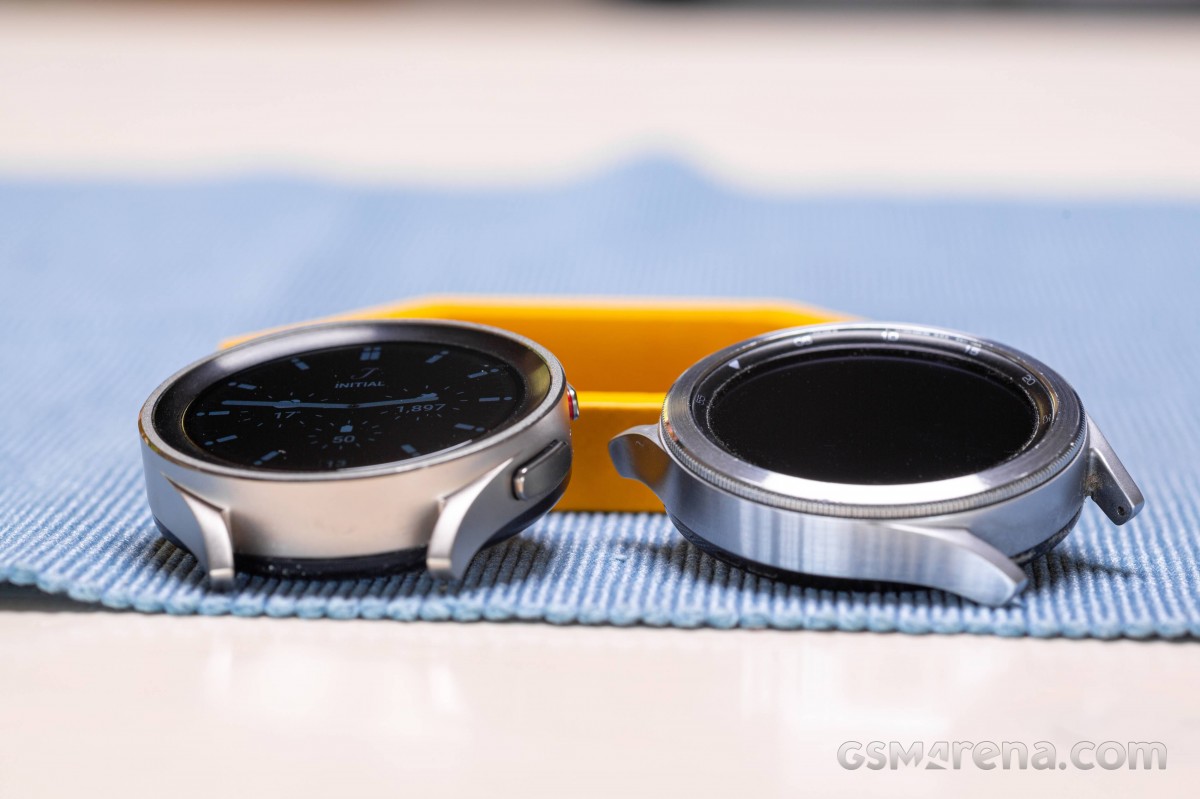 The display itself is now protected by a sapphire crystal layer that provides extra hardness. It's supposed to be considerably harder to scratch and break compared to the Gorilla Glaxx DX used in the previous generation.

And the surface really is durable. There are no visible scratches on the glass front of our review unit, even after it spent more than a month on the wrists of two separate reviewers. 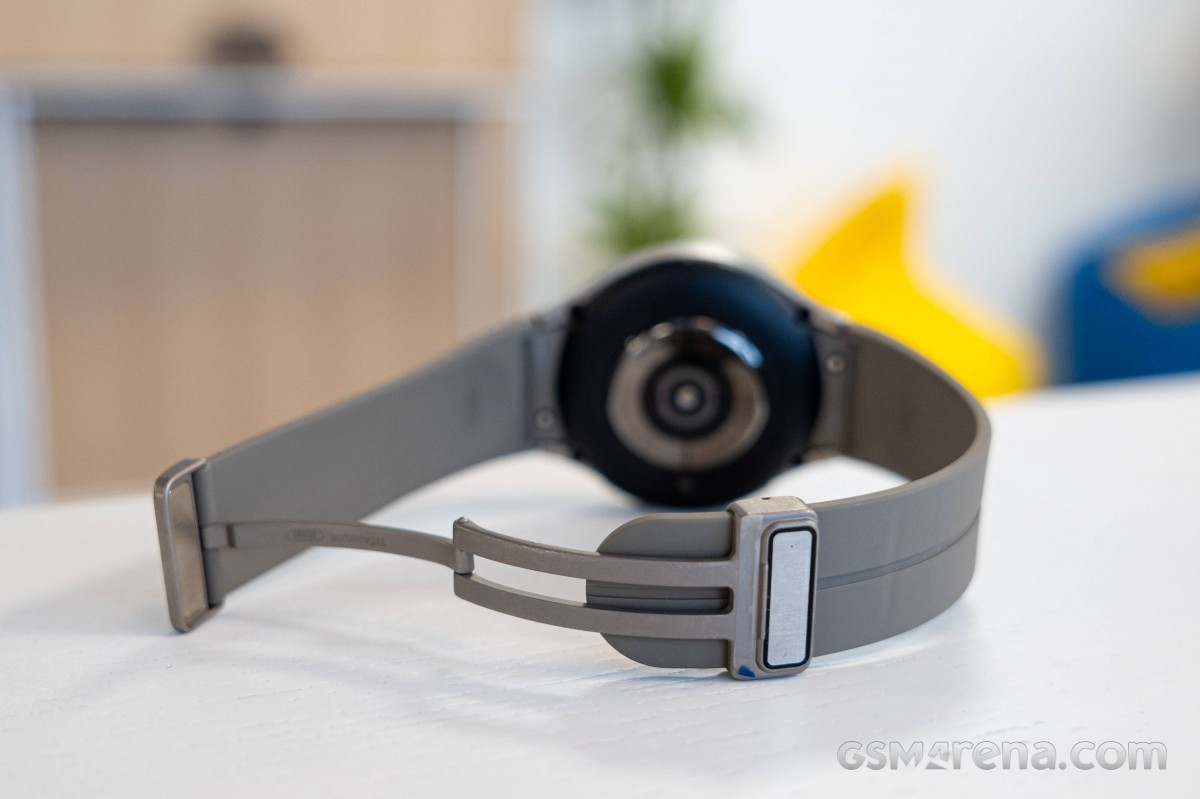 The strap provided is probably the best one from Samsung so far. It's made of silicone, but it's nice to the touch, soft and comfortable even when exercising. Its lug width is still on the 20mm as with the previous model, meaning it's not compatible with the 22mm bands of the models before that.

The thing we liked the most was the magnetic clasp. It's very easy to fasten and unfasten with a single hand, yet it feels amazingly secure once it engages.

In theory, the design allows you to adjust the strap length on the go without any tools, but in reality, we almost always ended up using a plastic spudger to lift the locking mechanism out of fear for our fingernails - it's really stiff once it bites down on the silicone strap. 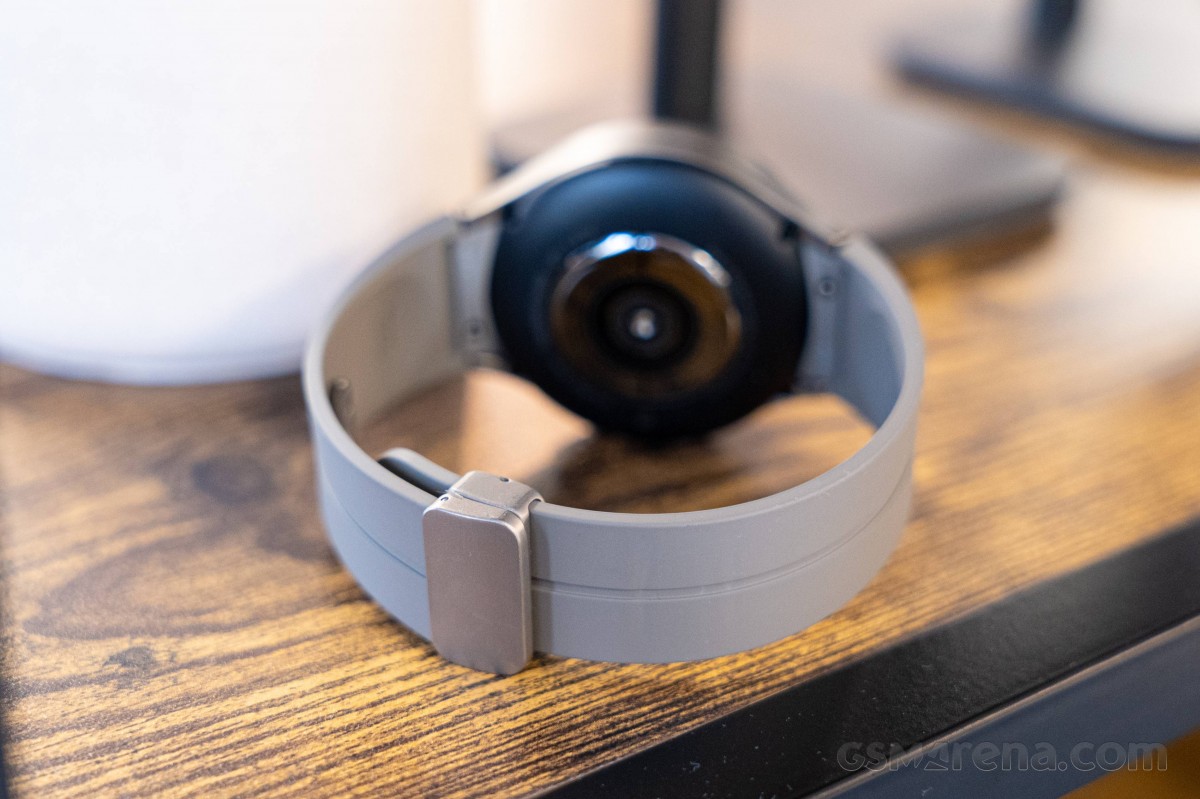 Last but not least, the Watch5 Pro bumps up the military-grade durability standard to MIL-STD-810H. As always, when the military standard specs are quoted, we like to point out that compliance with the standard is self-declared and not certified by any third party, nor does it guarantee drop protection or survival in extreme conditions.

The Galaxy Watch5 and the Watch4 both share pretty much the chassis with a two-tone finish, a flat display and identical dimensions. The newer Watch5 adds two grams to the overall weight, but that might be due to the new sapphire crystal display. And since it's flat, when gliding your finger around the bezel, you will feel the metal casing as well as the ridge it forms with the screen. It's not a big problem, but it's not ideal either. 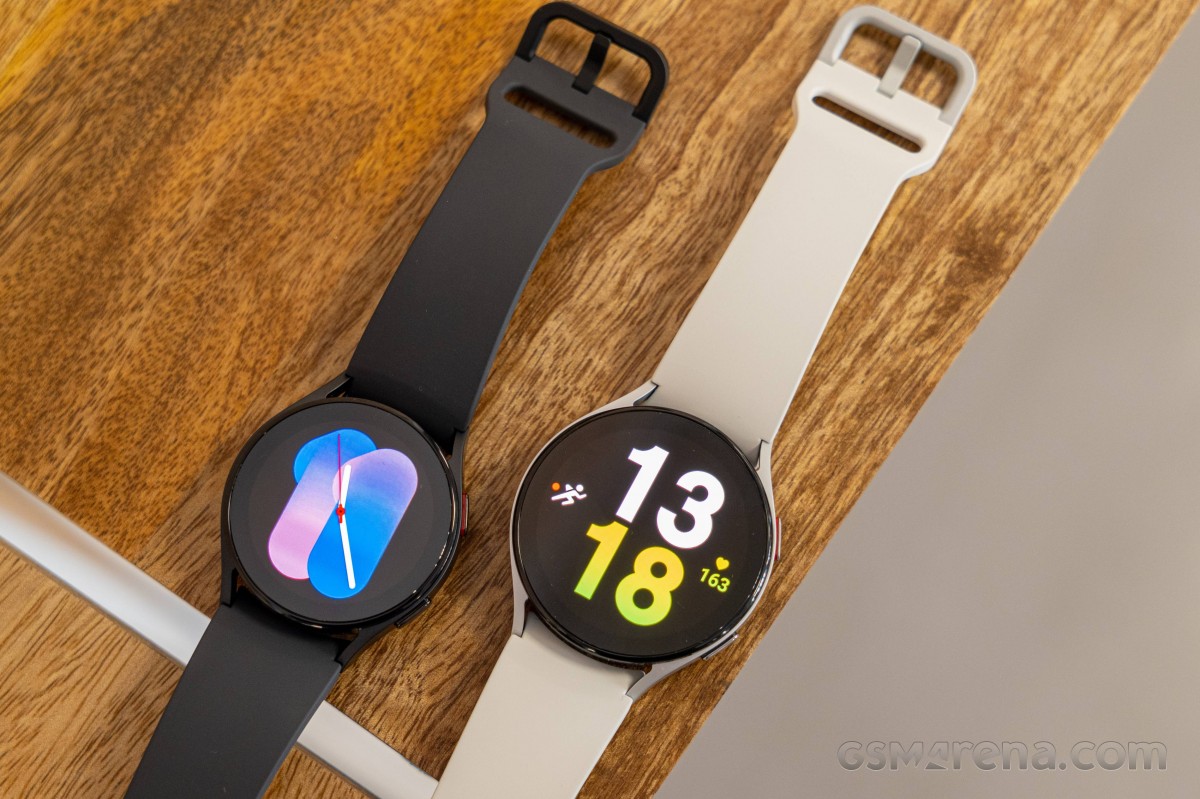 The bigger issue is that the display is exposed and easier to damage if you brush your watch incidentally against a hard surface. The glossy part of the casing feels much easier to scratch, too, and the imperfections will be easier to spot than on an anodized, matte surface like the rest of the body. 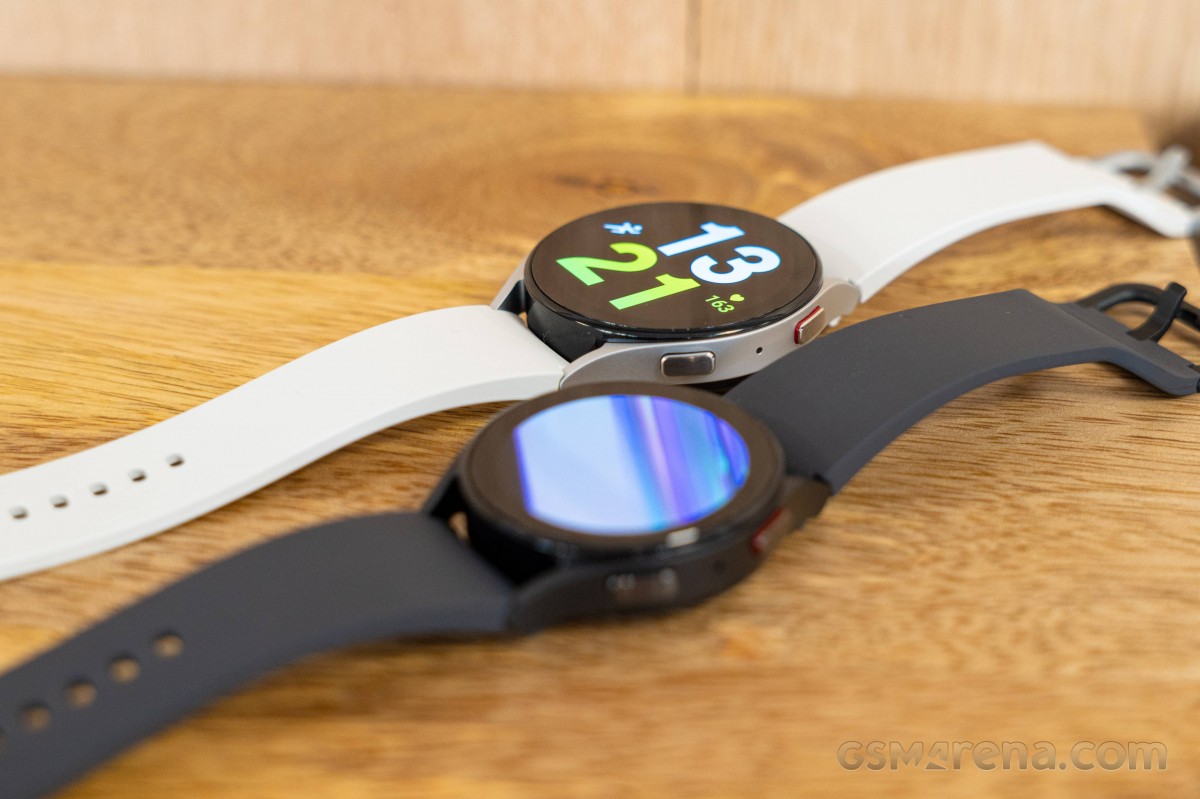 Anyway, it feels good on the wrist, and it's quite lightweight. It doesn't exude the same sturdiness, and premium feel as the Watch5 Pro, though. 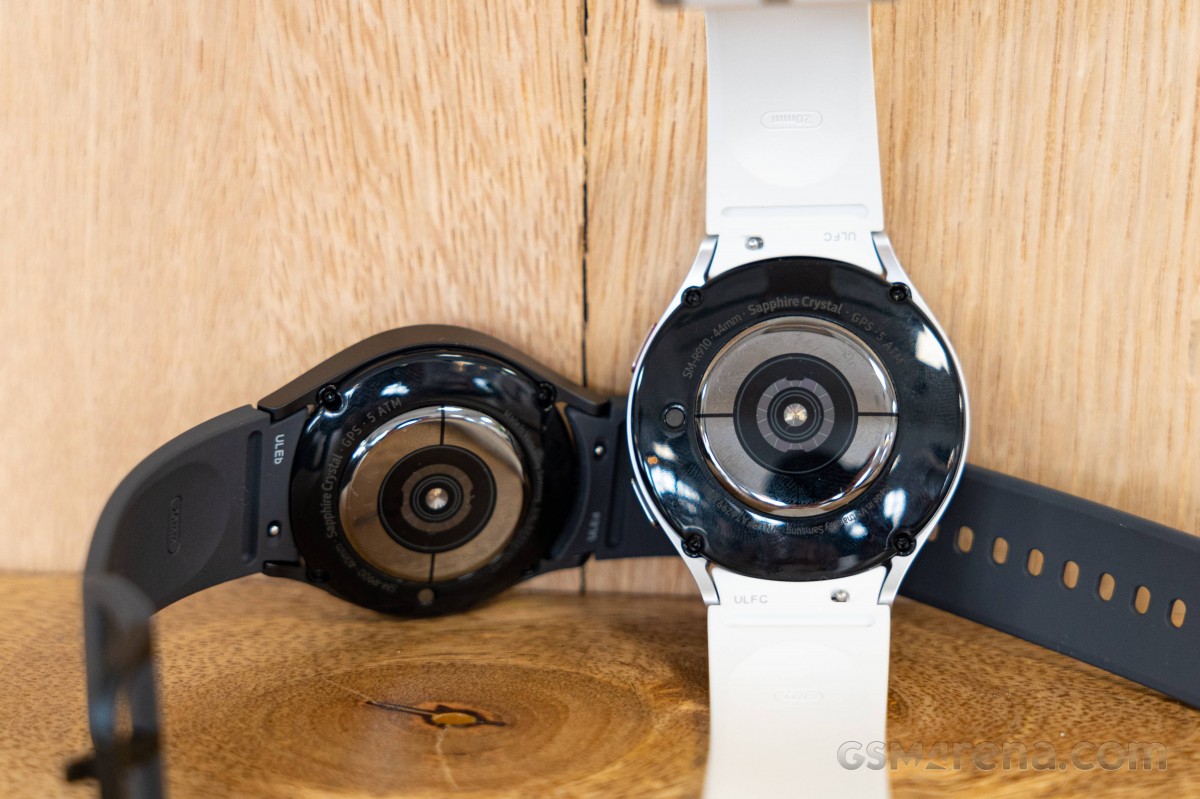 The strap on the Watch5 is silicone again, feels slightly rougher than on the Pro and features a standard adjusting design. It's compliant with the 20mm standard as well. We still think Samsung could have done a better job with the strap as it feels somewhat cheap for the asking price.

Just like the Pro model, the vanilla is also MIL-STD-810H-compliant.

There's nothing out of the ordinary when it comes to controls. The two buttons on the side are used for navigation - the top one takes you to the "home screen" and acts as a power button as well. It's accented with red on both watches. Long and double press are both customizable actions. The two buttons also serve as electrodes for the ECG and body composition measurements. 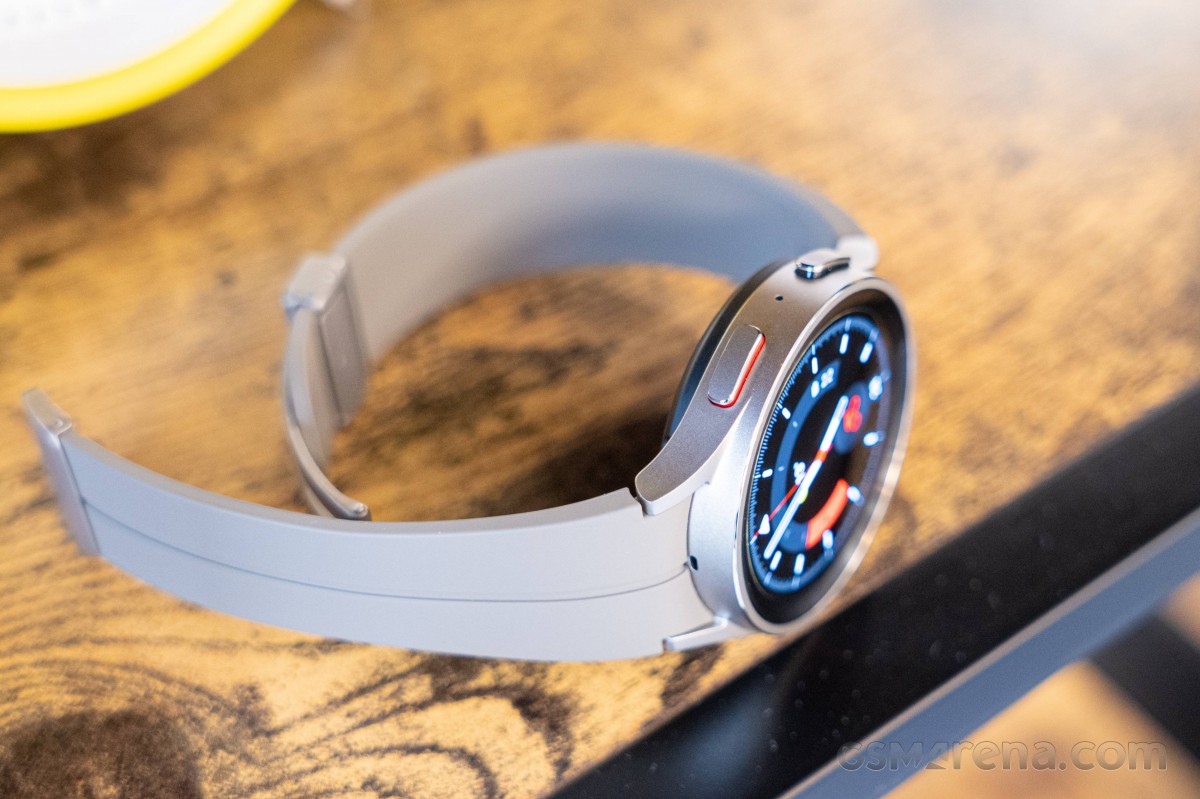 When it comes to the virtual rotating bezels, it's a mixed bag but definitely a huge downgrade from the Watch4 Classic. The one on the Watch5 is a bit easier to use because there's no obstruction, but the Watch5 Pro's virtual bezel is on the inside of the casing where the display lies. This means that you have to get your finger in contact with the black bezel, so you will inevitably touch the display itself as well. And that kind of beats the whole purpose of having a rotating bezel. 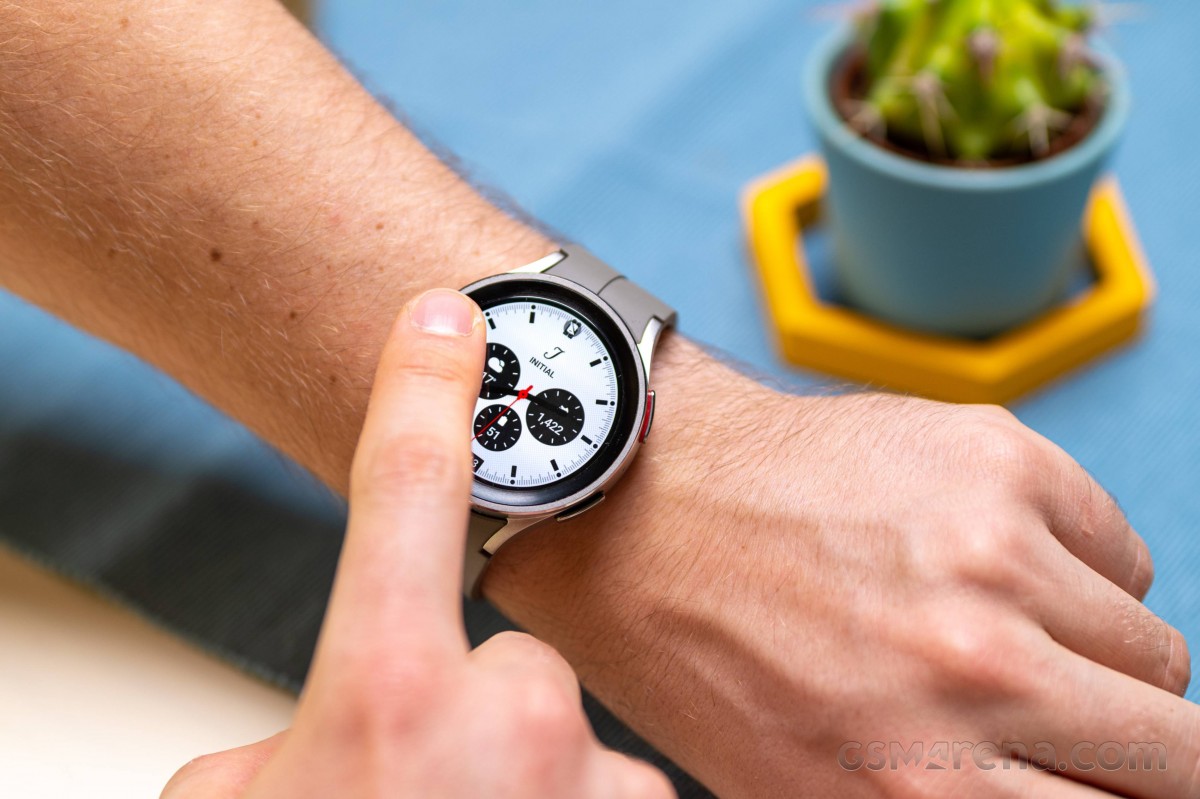 Having a physical bezel eliminates the need to touch the display, which may be useful if your fingers are wet or you don't want to obstruct the view of the small screen. In the current virtual implementation, gliding your finger on the virtual bezel leaves smudges on the screen. So you get none of the benefits that the physical bezel has, but all of these interactions command the extra attention and precision required to drag your finger along the edge. 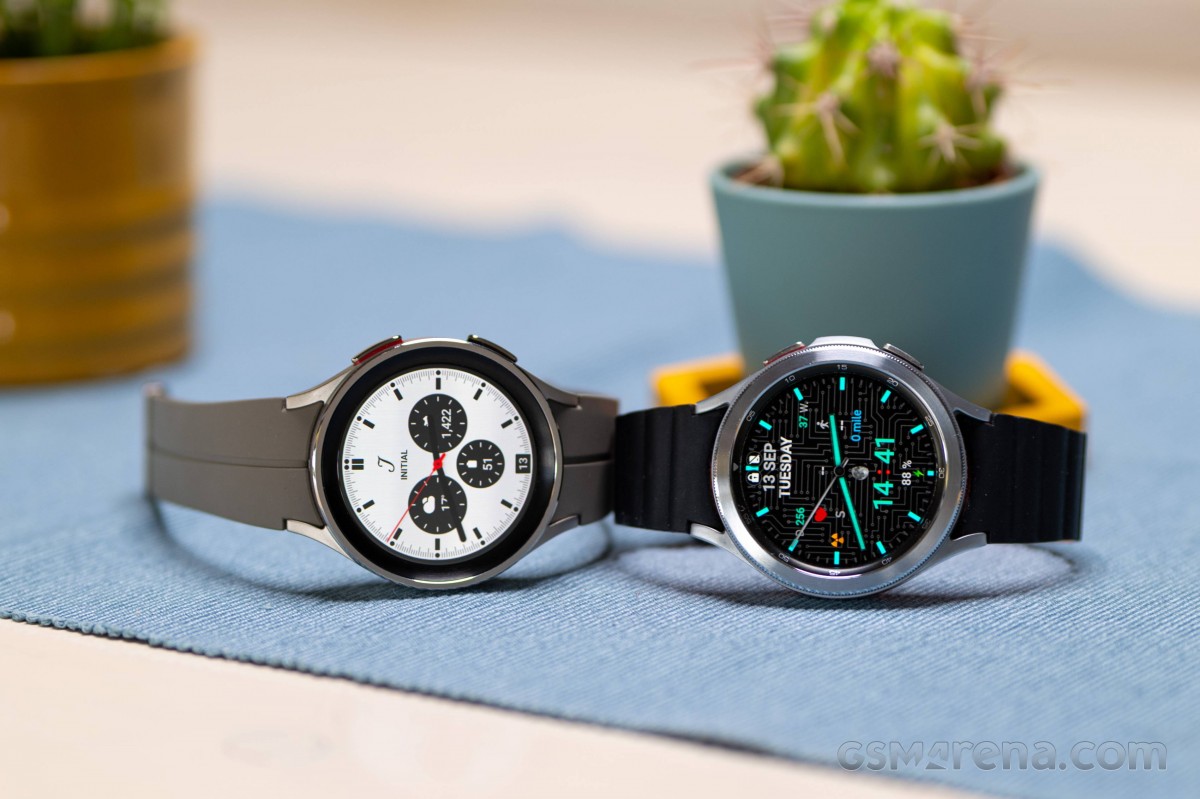 In the end, we found ourselves using the standard navigation method of just swiping and tapping on the display as it's more convenient than using an imaginary rotating bezel.

As long-time Galaxy watch users, we'd admit we were still sour seeing the iconic rotating bezel gone. It was one of the features that made Samsung's Galaxy Watches stand out and a rare, versatile physical interface for a small-screen device.

Yet, once you get used to the lack of a bezel, the UI seems well-suited for operating and for someone new to the Galaxy watch series, they might never know it was there. Save perhaps for the rare and confusing moments which require dragging a button along the edge of the screen to confirm an action (like silencing an alarm). 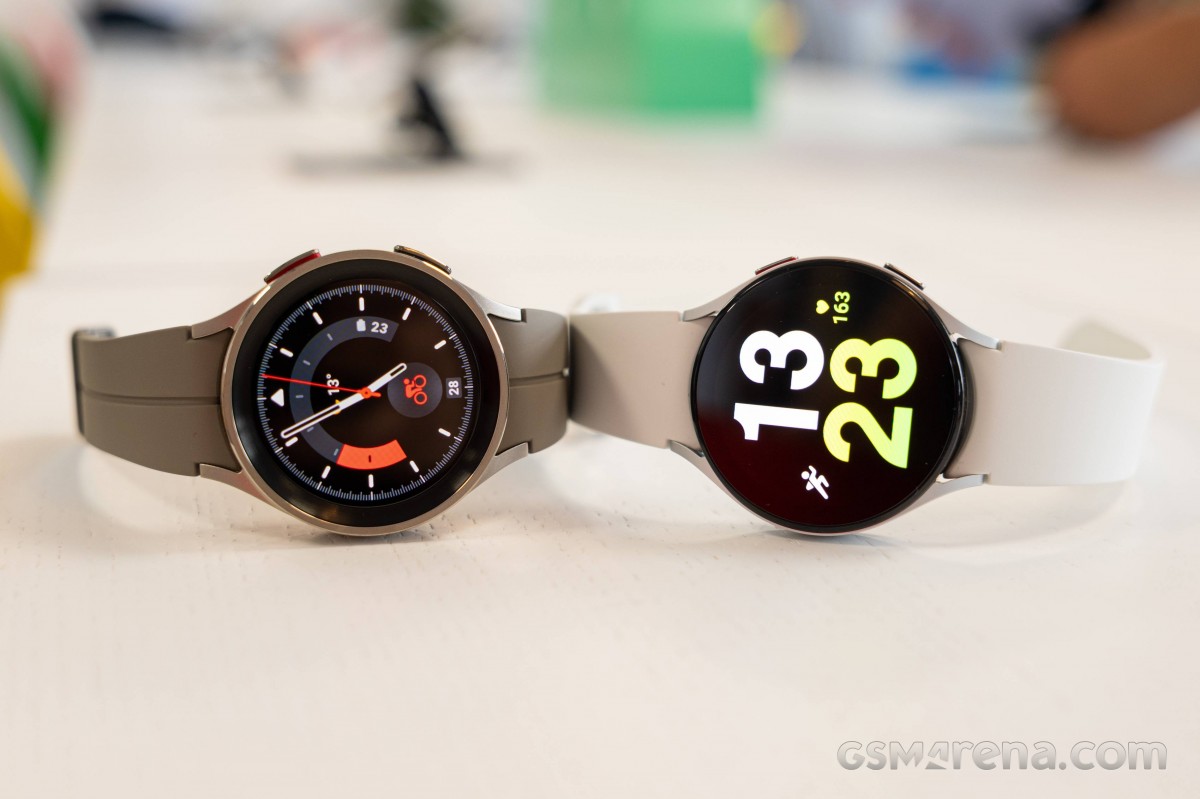 As far as comfort goes, both watches are easy to forget on your wrist. They stay firmly on the wrist and are lightweight enough not to bother you during exercise or sleep. Then again, if you are not used to wearing a watch at all, it will require some time to get used to. We just wished the vanilla Watch5 had a nicer band.

Team: no mention additional Con which is relevant to this model also and was mentioned in Watch 4 review "ECG and Blood Pressure measurements not certified in most countries" (even if you have Samsung phone)

Are the Garmin watches compatible with the Samsung Galaxy phone

I love Samsung Galaxy Watch 5 is very nice and beautiful and use blood pressure and Samsung pay for shopping and online shopping.