It's no secret that Samsung is working on a pair of new flagship smartwatches - the Galaxy Watch5 and Watch5 Pro, with the latter replacing the Watch4 Classic from last year. So anyone looking forward to the release will be glad to see the prices ahead of the launch in August. 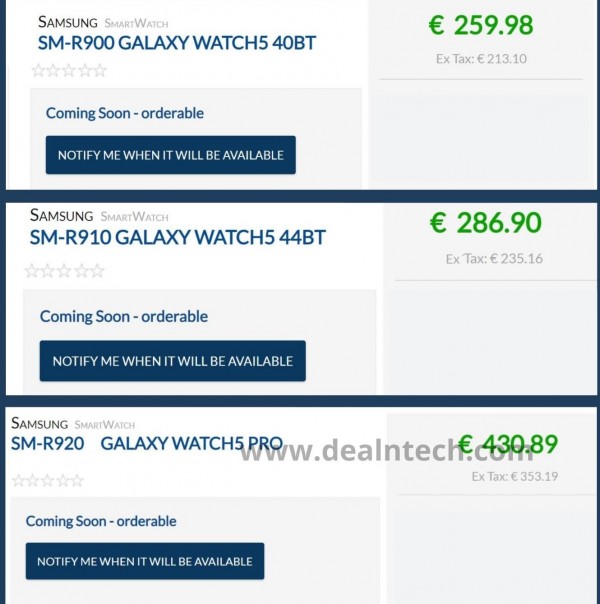 According to Dealntech, the Galaxy Watch5 will be slightly cheaper than its predecessor. The Watch5 40mm (BT only version) will go for €259 while the 44mm flavor will ask €286. The Watch5 Pro's price tag will supposedly be €430 for the 45mm BT-only option, which is a slight price bump from last year.

The pricing details come from a "reliable European retailer", which usually gets its prices right. That's not to say you shouldn't remain vigilant, of course.

Samsung lists Galaxy Watch5 and Watch5 Pro on its website

Samsung Galaxy Watch5 to be more expensive than the Watch4

With Ticwatch get ready for no updates...

Wow, 430 euro for the W5P, I guess I'll stick with my old Huawei Watch 3 Pro which it's receiving rarely updates, and wait carefully for the Ticwatch smartwatch which is the only option that looks somehow like the Huawei Watch 3 Pro, I pers...