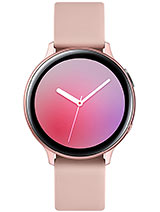 Taki, 21 Aug 2021Pairing with my iPhone the watch worked better than pairing... moreVery interesting. Are you able to enable all functions on the watch through your iphone - messages, call answering and sending etc. I was under the impression that some watch functions are not compatible with iphones. I would be very interested in your experience.

scorpio, 23 Feb 2021Has anyone tried to pair one of theses watches with an iPho... morePairing with my iPhone the watch worked better than pairing it with a OnePlus 8 Pro (when I had it), so I kept it paired to my iPhone. OFC Samsung works best.

Nick, 24 Feb 2021Hy! After last update gps doesnt work. Anybody else have si... morei dont have any problem of the sort

Hy! After last update gps doesnt work. Anybody else have similar problem?

Has anyone tried to pair one of theses watches with an iPhone and was it a success.

Roro, 15 Jan 2021Does the watch contain a mic for receiving calls ?yes but that is limited, u cant answer calls from third party apps(whatsapp, discord etc) but u can decline them. if u use the default phone app then u can answer and decline calls but u will have to have ur phone on u to do that unless u have LTE version then u can leave ur phone behind and still get the calls

MerpingShark, 22 Jan 2021Yes, you can make and receive calls with both LTE and BT ve... moreAgree but I believe that if you want your watch to be independent of your phone, that is you can leave your phone behind and go out without it, then you will need the LTE version. I have often gone out and left my phone at home and I still receive and answer phone calls on my watch. I don't believe you can do this on the bluetooth-only version.

Roro, 15 Jan 2021Does the watch contain a mic for receiving calls ?Yes, you can make and receive calls with both LTE and BT versions. During calls on the phone, tap the BT connected devices button on the call screen to transfer on the watch. You can also press a tiny pop up on the bottom of the watchface to transfer/control the call through the built in mic/speaker.

Roro, 15 Jan 2021Does the watch contain a mic for receiving calls ?yes on LTE version only.

Does the watch contain a mic for receiving calls ?

i'm having an issue with my samsung watch active2 aluminum (44mm wifi) where i cant pull down the notification shade from home screen, is this an update or an issue?

Thanks in advance! :D

Can someone explain me the difference between the samsung smartwatch lineups. thx in advance

Denver, 19 Aug 2019For 250 euro? without cellular network? no buy samsung stop... moreYou know there is a cellular option for this watch for almost the same price right?

Active2 Owner, 02 Jun 2020Guys, girls who have this watch how much memory free is ava... moreDid you download the offline maps on HERE WeGo app? I had some memory problems after I uninstalled spotify and HERE WeGo, I though it hadn't deleted my offline songs and maps so I resetted it. After I reset my watch I had 1.5gb free.

Imran, 26 Feb 2020When samsung activate ecg feature on active2. It's 2 late Read SamMobile.com all information is there. ECG coming to this watch, if i'm not wrong right now is available in Korea.

Guys, girls who have this watch how much memory free is available for you in this watch? I just after month noticed that system from 4GB system takes 3.2GB it is normal? How to free up it? I just installed some original Samsung's watch faces, apps. And Here Maps app. That's all. It is normal that OS takes 3.2GB memory???

Dr Fazal Qayoom, 24 Mar 2020And battery Time PleaseI activated almost all standard features like: GPS, Wifi (automatic) and etc. (without always on display - deactivated). I charging about 2-3 days. If I using (touching, changing watch face often and etc) I need to charge after 1-2 days. It's pretty good battery, but it's not something incredible :) I had Amazfit Verge which by Huami could be about 5 days. For me need was charge after some updates about 2-3 days too. So this Samsung watch which have much more better screen, display, features and etc. I think battery is very good.

Adi, 08 Dec 2019Amazing Watch using from last 1 and half month everything i... moreAnd battery Time Please