New high quality renders of the Samsung Galaxy Watch Active have surfaced, confirming two things. The watch will run on Samsung's new One UI and it won't have a rotating bezel like its predecessors.

It made sense for Samsung to bring its new-look One UI to Tizen as well as Android (hence the name, One UI) and it looks every bit as fresh and clean as you can imagine. Since Samsung is moving away from the rotating bezel it seems One UI will be operated entirely through swipes and by using the two buttons on the side of the Galaxy Watch Active.

All the images and watch faces have a predominantly dark background, which not only gives the UI a posh look but also bolsters battery life considerably (thanks to the OLED nature of the watch' screen). 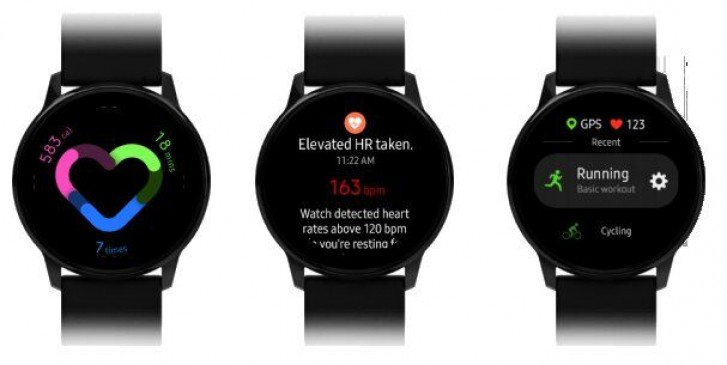 It seems like the Galaxy Watch Active will be activity-tracking-focused with a number of watch faces that put your daily goals front and center.

The new Watch Active is said to be able to automatically recognize more types of activity and track them without the need for you to initialize a workout.

The Galaxy Watch Active will have a continuous heart rate tracking feature that, if enabled, will notify the wearer of any abnormalities with their heart rate.

Samsung is expected to show off the Galaxy Watch Active alongside the Galaxy S10, S10+ and S10e at its February 20 Unpacked event.

now with twice the lag!

Same! - I would expect it to, due to the specs of the new watch being similar to the Galaxy watch and the fact it's not that old, leads me to believe it could be easily updated - Then Samsung can have 3 different watch face size options to cover all ...

Everything is nice. But the app s-health is crap unless its gone through a complete overhaul it makes no sense to buy samsung watches for fitness tracking anytime.