Samsung is knees deep in the latest trend of gearing up your wrist with an extension of your smartphone. The Gear S however walks the extra mile of offering independent 3G and Wi-Fi connectivity along with full telephony support.

A culmination of several smartwatch iterations, the Gear S packs better hardware and a lot more of it. Samsung is breaking new ground here as the Gear S is actually more of an independent smartphone for your wrist, than an accessory for your smartphone.

The device is equipped with its own SIM card and has all the needed hardware and software to function as an independent phone that just happens to be attached to a strap and be able to sync with your Samsung smartphone.

The ambiguity in nature is a very bold move by the Korean giant, but has a multitude of drawbacks, most prominently - the need to buy a separate monthly data plan just to use the rudimentary smart features of your watch without it being paired to a handset. But more on that later. 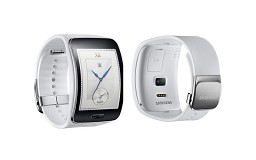 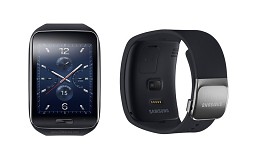 Unlike it's cousins - the Moto 360 and the LG G Watch R - who would try anything to pass as regular wrist watches on quick glance, the Gear S is definitely not subtle in its appearance and seems utterly uninterested in pretending to be a watch. The device is futuristic, with a wide wrist band and curved glass finish, but most importantly, it's huge compared to the competition.

A 2-inch Super AMOLED screen and the rectangular shape instantly paint the picture of a high-tech gadget that can coincidentally tell time, rather than a watch in the traditional since. The bold choice of colors and materials only underline this general feeling.

The lack of a watch crown and the rectangular physical "home button" below the screen represent a decisive step away from the wrist watches of old.

The Gear S definitely deserves credit in the hardware and features department, as Samsung has jammed it with pretty much everything they could fit.

The Samsung Gear S in action

After taking a quick tour around Samsung's interesting new take on redefining the wearable scene lets dive deeper into what the Gear S has to offer in terms of hardware.

Hi . I am wondering do you need to have a sim card in this or will it link to the phone via app/Bluetooth so then I can take calls . Messages . Notifications on Facebook. WhatsApp ect ect. Many thanks. Tom

I've toyed with idea of getting newer model, but cant find anything with same kind of function...with exception of the lack of NFC, this watch has everything and I swap out my sim from phone when going for run, which means I'm still contactable if ...

Who else is reading this in 2020?? I've used it for four years straight.. still looks great and works like a charm.