Samsung has released a new software update for the Gear S2 smartwatch that was launched back in October 2015.

According to the official changelog, the update brings in improved battery life and implementation of stability code for device security, but early adopters claim it also comes with a new UI which is the same as the Galaxy Watch Active2. 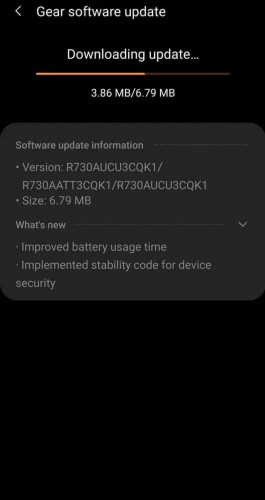 That said, the new update now lets you clear all the notifications at once. Previously, they had to be cleared one by one.

It's unclear what region is currently getting the update, but you can check for it by opening the Galaxy Wearable app on your smartphone, and tapping the Download and install option in the Watch software update menu.

If you've got the update and notice anything new not mentioned in this article, let us know by dropping a comment below or sending in a tip through here.

Can I flash the new firmware for gear s2 on my gear s2 classic? I don't think my service provider is gonna give this update.

Does anyone know if this new update bricked your Gear S2. I have been cautious with updates since I found out all the problems associated with updates to Sammy's wearbles app. There were all sorts of problems with the UI since Sammy didn't participat...