Samsung still supports the Gear S3 (2016) and Gear Sport (2017) smartwatches. These two (well, more than two as there are several versions of the S3) are getting new update that is currently rolling out in South Korea and the US and should reach other markets in short order.

The update brings the Bixby assistant, you can ask it questions or tell it to perform certain actions (e.g. start an exercise or control Spotify). These watches originally launched with S Voice, but Samsung will shut that down on June 1, so this update comes just in time.

Additional changes include showing icons on the homescreen for apps running in the background. A tap will open the selected app, which really helps multitasking on such a tiny screen. Also, the icon order customization in the Quick panel has been reworked. 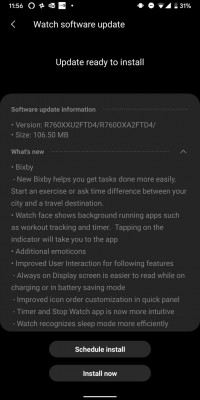 The legibility of the Always On Display has been improved in battery saving mode and while the watch is charging. The Timer and Stopwatch apps have gotten a UI polish as well. Finally, new emojis have been added and the watches should be better at recognizing sleep mode.

The new software version of the Samsung Gear S3 classic and frontier watches is R76*XXU2FTD4, the Gear Active is getting R600XXU1CTD3.

Why would they allow apps to run in the background on such a tiny device, the S3 just can't handle that. It also REALLY did not need that feature, how hard is it to just swipe to the app you are using. My watch has never ran so SLOW up until thi...

My S3 D420 drain the battwey within 12 HOURS. All this after the last update.

Until recently my Gear S3 would drop to 75% battery by the end of the day. Since update the battery drains completely by early afternoon. This was sudden and not gradual so this isn't natural degradation. Ditching S3 for a Garmin. Won't buy...