The Samsung i8000 Omnia II has generous built-in storage - 8 GB in our case but there will also be a 16 GB version. We also found info on a 2GB one but there's no user report yet to confirm its existence.

The file explorer is the standard Windows Mobile one, but it's got itself a new color scheme and slightly larger buttons to make it more finger-friendly. It also offers an alternative tree-like view mode, much like the desktop Windows. The functionality of both applications is of course top notch, allowing you to do anything you might want to with your files - moving, copying, deleting or renaming - you name it.

The final nice touch is the added kinetic scrolling which makes going through medium-sized lists a lot easier. Though we still prefer to use the now much more thumbable scroller for those extra long ones.

Finally the Samsung I8000 Omnia II offers a search option for its file manager, in case you cannot remember the location of the file you are looking for.

The Samsung i8000 Omnia II is equipped with an elaborate picture viewing application called Photo Album. It sorts the photos by month and offers a nicely customizable slideshow. You get to pick the transition effect, the direction and the time for each separate photo to stay on the screen. Naturally scrolling through the images is easily done with finger sweeps.

Alternatively you can opt for a folder grouping of the images on your phone, where each folder containing an image appears on screen, alphabetically ordered and with an automatically assigned thumbnail. 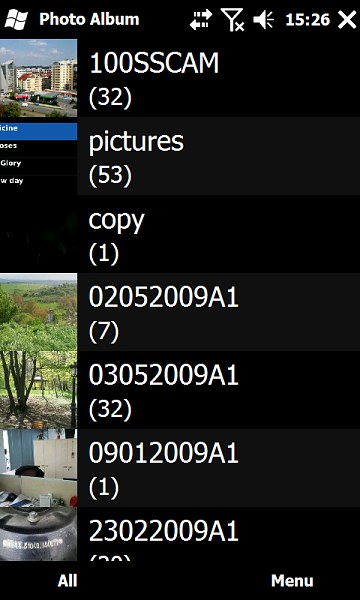 Grouping by folders instead of months is also available

Turning the phone sideways brings the third viewing mode available. All your photos are collected into a 3D arc and they slightly overlap one another much like cards. You scroll through them with a sweeping finger gesture.

The 3D arc view is undoubtedly the coolest looking

The second arc of thumbnails crossing the current one represents the photo folders instead the individual shots. Dragging them up or down changes the current folder quite naturally.

Overall, the gallery is perfectly smooth and responsive and is definitely one of the coolest ones we have seen lately (though perhaps not as practical as attractive).

Selecting an image loads it in a single view where you can zoom or slide to the next one. Zooming in is extra easy thanks to the one-finger zooming that is now becoming customary on Samsung touchscreen handsets.

You simply have to hold your finger over the part you want to zoom in for a second on and drag your finger upwards. A similar gesture downwards will zoom out. You can also zoom in and out through double tapping but you have no control over the magnification that gets applied that way.

The one-finger zooming is really cool

Naturally going from portrait to landscape mode is automatic thanks to the built-in accelerometer.

Just like with the Omnia HD, Samsung have taken a very interesting approach with the gallery of the Omnia II. The handset boosts the contrast and saturation of the photos when browsed fullscreen, which makes them look amazingly cool on the large AMOLED display. This time however the more powerful CPU means that the color corrections are not causing any lagging despite the higher display resolution, easily granting you the best of both worlds.

In this way the photos look stunning on the display, while at the same time if you download them to a computer they retain more information, giving you more freedom for post-processing.

So to summarize, Samsung have succeeded in create a superior photo browsing experience with the help of 3D graphics and an innovative interface for their Omnia II. Undoubtedly the fluid interface and the great responsiveness are its two other key features.

Two in one - the Touch Player

Samsung have wisely decided to give users a new touch-friendly media player and spare them the inconvenience of installing a third-party one to substitute for the poor default WMPlayer. The Samsung Touch Player handles both video and audio files, supports playlists and has the standard album/artist/tracks sections.

There are two main views available in the i8000 Omnia II player. The first one is the Library - at the top you have six tabs: all music, albums, artists, genres, videos plus Now Playing. When you switch into play mode, you see a simple and clean interface. It has the standard music buttons you would expect - volume, next/previous track, play/pause and shuffle, while the album art fills most of the screen above them.

The Touch player as a music listening tool

The options menu offers the ability to play the music faster/slower or to set the track as a ringtone. Audio effects can be applied to both videos and audio tracks.

Playing video is very simple - it's done the same way as an audio file. The player interface looks the same, but tapping twice turns on the fullscreen mode. It has the same control buttons as the standard one, but everything is changed for landscape orientation and there is no taskbar at the top or empty black spaces.

Watching a video on the Omnia II

The Touch Player could easily handle DivX and XviD videos we threw at it, showing that all codec issues we witnessed in the pre-release samples are now solved. However it refused to play any videos with a resolution greater than D1 (720 x 480 pixels).

It's not that we upload HD content to our handsets every day but with the kind of processing power it was probably possible for Samsung to enable it. After all, coupled with the TV out and even the wireless DLNA you can certainly think of a few scenarios where that would be welcomed.

FM radio is nice and easy

The FM radio on the Samsung i8000 Omnia II has a really neat and simple interface and can automatically scan and save the available stations in your area. It also has RDS support and automatic scanning for an alternative frequency. This means that if you travel the Omnia II will take care of auto-switching to the frequencies of your selected radio station.

There is also room for six shortcuts for your favorite stations on the radio app screen. The handset also supports radio broadcast recording and of course can be minimized to play in the background.

Audio quality led down by the stereo crosstalk

The Samsung I8000 Omnia II generally has pretty good audio quality, save for the one major weakness. The stereo crosstalk reading in our test was disastrously high suggesting quite a lot of signal leakage between the two channels.

The noise level and the dynamic range on the other hand are excellent and so is the intermodulation distortion. The total harmonic distortion reading is also pretty good, although we have seen better.

The frequency response of the Omnia II is very good for most of the range but the bass frequencies have been cut off resulting in the big numbers in the table. 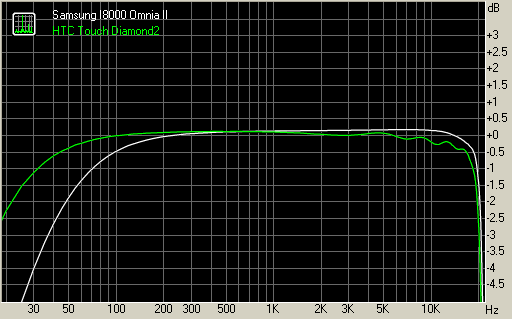 how to open a phone off.because no signal and always airplane mode.and my contacts is not look.