Samsung inadvertently leaks an image of its own Galaxy Watch

Samsung has been gearing up for its announcement of its next-generation smartwatch. FCC filings have already pre-confirmed that it will not be called the Samsung Gear S4, but the Samsung Galaxy Watch. Today’s leak confirms this, along with the model number that we saw in those FCC filings.

The leak happened on Samsung’s website but has since been taken down. First spotted by CNET, the Galaxy Watch was seen in a device comparison chart next to the Gear S2. We see the watch in Rose Gold and a model number of SM-R810NZDAXAR. This corresponds with the model number SM-R8XX scheme spotted last week. 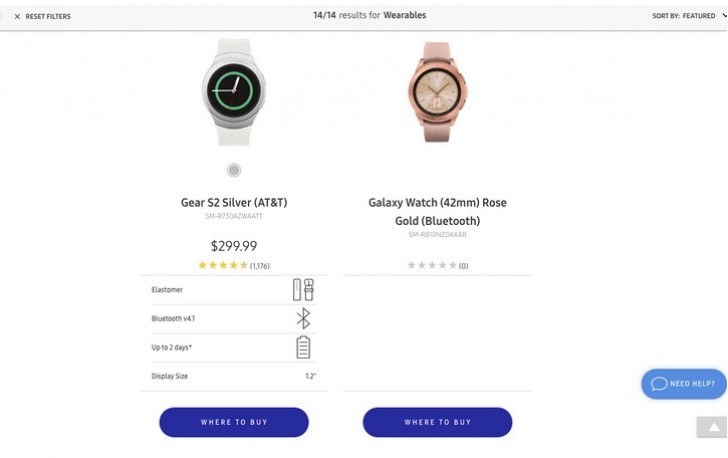 Variants will come in either Bluetooth-only or LTE+Bluetooth connectivity options and will support Wi-Fi 2.4G b/g/n. The Galaxy Watch is expected to feature Samsung’s Exynos 7 Dual 7270 chip, though there’s still no confirmation of this. The Watch also will come in 1.19” and 1.3” display sizes. THe watch is also rumored to have the ability to measure blood pressure.

It wasn’t sure if Samsung was going to launch the Watch alongside the Note9 or wait until IFA, but given all the leakage of this device, we’re almost certain that we’ll indeed see it in New York with the Note9. This is set to take place on August 9.

The rumored Samsung Galaxy Watch will come in two sizes

To be honest I've used all the best smartwatches and keep coming back to the gear 3... Battery life is the best I've had from a full smartwatch.... The design is awesome... Build quality great.... The bezel is the best way of operating the watch ...

when nobody cares - you make your own leak. These wont bring success ...

Tizen is open to everyone and is employed in a broader range of devices than Android. Also there's no strict non-sense enforcing by Samsung like Google do for the Play Services, which are critical for a lot of your droid's functionalities, including,...