Samsung and Armani do it again and the GSMArena fashion column is back in business. It's a whole new dress code this time, as the Samsung M7500 Emporio Armani leaves the tux in the closet and goes clubbing. And if a name that opens doors is not enough, the Emporio Armani phone by Samsung claims to have an ear for music. We guess there's no doubt though, its No 1 job is to get you noticed. Aptly dubbed Night Effect, the M7500 Emporio Armani just loves it when it's dark. So, someone please hit the lights.

Each time a fashion brand enters the mobile phone market controversy is inevitable. The haute couture label certainly justifies the asking price but will the handset get away with gaps in the spec sheet.

The Samsung M7500 Emporio Armani is a stylish handset with a distinct focus on music. The flashing light effects, the dedicated music keys plus the 3.5mm jack and the slightly redone music player application are a reason enough for music lovers to check it out before purchasing their next handset. The distinct music slant is also quite in line with the handset's obvious refusal to compete for a top slot in the fashion phone segment.

With the Emporio Armani logo, Samsung are trying to attract users who have both music features and style in mind. The phone is mainly youth-oriented, especially with the flashy stripes and logos on the sides.

The Emporio Armani phone at ours

It is interesting to note the partnership that gave birth to the Samsung Armani phone back in September 2007 was not a one-hit-wonder. But Samsung have obviously tried to not make it d?j? vu all over again. The original Giorgio Armani touchscreen phone clearly has the high-end sophistication, confidence and class associated with the luxury Giorgio Armani brand whereas the Emporio Armani target range is different and that's obviously reflected in the M7500. Take the flashy branding away and you get a regular handset with music on its mind. Think M3510 and M3200 of the Beat series.

Though it's hard to identify a clear competitor for the Emporio Armani branded M7500 - as such partnerships are not so common in the mobile-phone world - we should definitely mention some phones which have a lot in common with the Samsung M7500. Probably the Walkman phones from Sony Ericsson are the major competitor for the Emporio Armani handset. Walkmans in this price range do seem to have the upper hand in terms of features though.

The 300 euro they're asking for can get you Sony Ericsson W902, which matches the features of the M7500 but adds a 5MP AF camera, accelerometer for auto screen rotation, image geo-tagging and nice perks like SensMe and Shake control.

Half the price of the M7500 is another music-centered competitor - Nokia 5320 XpressMusic. This S60-driven phone is 3mm thicker, has only a 2MP camera with fixed focus and a smaller 2" display but outdoes the Emporio Armani with its 8-way Navi key, dual-band HSDPA and smartphone capabilites.

Motorola ROKR E8 can also come into play and again it's almost twice as cheap as the M7500 Emporio Armani. The Moto's limitations are the 2" display, no 3G support and the 2MP fixed focus camera. On the other hand, the E8 is only 10.6mm thin, has a touch-sensitive morphing keypad, scroll wheel and 2 GB of inbuilt memory.

Before we wrap it up, Samsung do have another co-branded phone: the Samsung F480 Hugo Boss. This one differs from the original F480 only by virtue of the Hugo Boss insignia on the case and of course the well-stocked retail package. 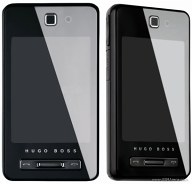 If fashion and music are your game, hit the next page for more on the Samsung M7500. Let's turn it on and light it up, and take it for a spin.

how to fix my phone..the problem is the security phone code ..plss help me..tnks

where in samsung service center can i buy the lcd and the front mirror of samsung M7500 emporio armani..tnx

Does somebody know how to remove the clock & date bar from the main screen. And shorcuts too