A couple of weeks ago, when Samsung announced the Android 7.0 'Galaxy Beta Program' for users of the company's Galaxy S7 and S7 edge smartphones, it was revealed that the program will only be available in the US, UK, South Korea, and China. However, now it looks like some other countries may also be added to that list.

This was indicated by a Samsung support representative in the Philippines, who - on being queried about the program's availability in the country - said: "You may wait until early next week for its release to your device." Following is the screengrab of the conversation: 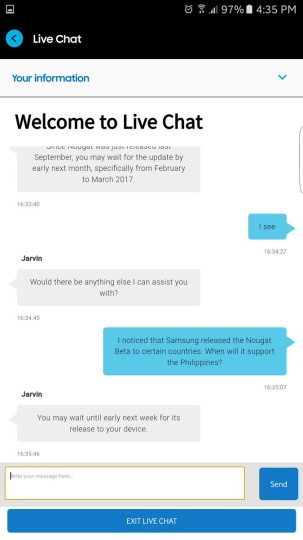 Keep in mind that the information comes from a support rep, so it shouldn't be taken as an official word as reps have been incorrect quite a few times in the past as well. Besides, beta program requires interested users to register for it, but the aforementioned reply doesn't make any mention of it.

I am a Samsung user with T280 model tab, everytime I encounter the videos on my facebook that it won't played and viewed,I really enjoy to have a samsung unlike the others it won't last....

yes I do, but than you have splash proof with the z force which is basicaly only good for talking in the rain but better than no protection

Ohh sorry. I thought he was saying that Samsung didn't update the S7/edge in the same country at the same time.