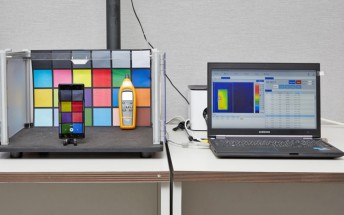 Samsung is offering a peek behind the scenes of how a smartphone or wearable is designed. The Reliability Test Group is vital to the process and is involved from the very beginning. As soon as the specifications are determined, the group starts starts planning the tests.

Then a feedback loop forms  the manufacturing sites send in prototypes, the group evaluates them and reports on what needs to be improved. It varies by device, but a single model may have to go through as many as 12 different cycles.

Heres a look at some of them.

Tests are performed in controlled conditions that simulate both indoors and outdoor conditions using scaled models of real life scenes. An artificial sunlight system can take a camera from day to night testing and there are specific scenarios like a neon-lit street.

Testing the camera in a controlled environment

The group also takes the phones outside for some real-life shooting. In the end brightness, color clarity, image noise and other factors are evaluated.

Whether its playing the most demanding mobile games or running the camera for extended periods, the heat produced by smartphones is carefully tracked by thermal cameras. Not just how much heat, but where it comes from too.

Many Samsung Galaxy phones have an IPX8 rating, so they are submerged in 1.5m of water for half an hour. Samsungs smartwatches and bands are tested to a higher standard (5ATM) to ensure they will survive the added stress of swimming.

Water is the enemy of electronics

This one is a classic  dropping the phone from different heights and at different angles to find out weak spots. High frame rate cameras provide clues on how the device can be made more robust.

This lab follows on with tumble tests, but also tests the gadgets resistance against user-inflicted damage  it repetitively presses buttons, plugs and unplugs headphones and opens/closes the SIM card trays. Theres even a test that simulates the owner sitting on the phone when its in their back pocket.

Tumbling  Pressing  Inserting the SIM tray  Sitting on the phone

Just pressing buttons isnt enough  does the feel of the buttons change with temperature and humidity? Samsung has users in all environments, so these tests mimic climates from around the world. An employee tries the buttons to provide some real human feedback.

With the help of dummies and computers, this lab checks everything audio-related  from calling (either talking on the phone itself or using a Bluetooth headset) to ringtones. Tests are carried out in two chambers, the first blocks out outside noise, the second simulates a real-world environment.

Watch the Galaxy S9 duo get scratched, burnt and bent

Nah, if you color the glass and metal to be the same, it should be fine

Completely empirical: In my years of use, I found LG and HTC phones as the most durable, followed by Samsung (in post Nokia era). LG and HTC are like bricks (non flagship phones). I've had LGs that wouldn't break no matter how I threw it. ...

But I heard it was 4K but I think I'm wrong on this one. mhmmm!