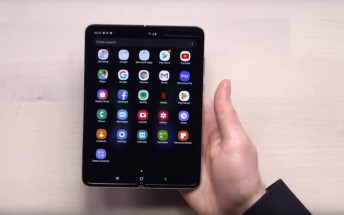 Before the Samsung Galaxy Fold reaches consumers, it visited a number of celebrity fans who were invited to take part in the exclusive event The First Fold. Check out their reactions below.

You should recognize at least a few of them. First up is Mario Götze, who scored the winning goal in the final of the 2014 FIFA World Cup, next is Steve Aoki, a Grammy-nominated DJ. Then its Millie Bobby Brown from Stranger Things and Twitch star Ninja, plus some of the biggest YouTubers.

Samsung also posted another promo video  an interpretive dance that captures the spirit of the Galaxy Fold. The dance was created by world-renowned choreographer Amy Gardner and is set to a cover of Toms Diner (reinterpreted by Santigold).

Samsung Galaxy Fold infographic describes the phone's front, back and inside

Samsung Galaxy Fold goes on pre-order in Europe on April 26, available on May 3

I didint even recognize here, was thinking who is that woman :)

In a video, the LCD seemed like it was about the break when some guy was folding it, I expect ribbon cables to be ripped in the final product causing similar issues to the Galaxy Fold.