Samsung has undertaken court action to sue Nvidia accusing it of false advertising as it presumably faked some benchmark results, which compare the Exynos 5433 to the Tegra K1. The false advertising claim concerns the Galaxy Note 4, which Nvidia compared to the Shield Tablet not too long ago. Nvidia claims the Tegra K1 residing in it is the "world's fastest mobile processor" and Samsung isn't too happy with this, as it considers the Exynos 5433 chip to be the fastest one available.

The lawsuit also includes claims of infringement eight patents - Nvidia would be violating six of them, while Velocity Micro (an Nvidia client) is accused of violating two.

In a response to Samsung's accusations, Nvidia posted a clarification online explaining they ran the benchmarks on the out-of-the-box units of the Galaxy Note 4 and the Shield tablet. 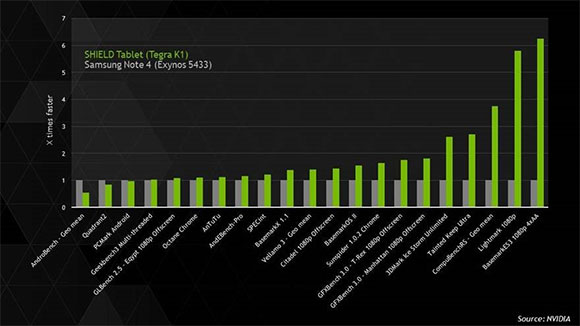 Samsung's lawsuit comes a couple of months after Nvidia took action against the Korean company and Qualcomm for infringing its own patents. Nvidia wants the ITC to block shipments of the Samsung Galaxy smartphones and tablets utilizing the Qualcomm Adreno, ARM Mali and Imagination PowerVR graphics chips. The company says a total of seven patents are infringed by these GPUs and it's the first time the it is initiating a patent lawsuit in its 21 years of history.

Nvidia brushed on its ongoing patent lawsuit with Samsung saying that they weren't surprised by the counter lawsuit but they are convinced their initial patent infringement case is moving forward and that it's "a far more serious problem" for Samsung.

Oh Samsung, you so silly!

You mean when apple copied LG?