A few days ago it was reported that Samsung is going to begin beta-testing Android 7.0 Nougat for the Galaxy S7 and Galaxy S7 Edge in the UK but since then the Beta Program app was pulled from the app store.

Now it seems the beta-test is on again and has an official date set for November 9 (again in the UK). According to a leaked screenshot Nougat will be beta tested from the 9th of November until mid December. 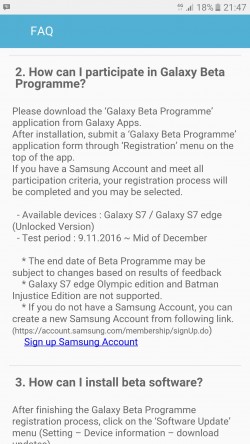 Users with regular (read non Batman Injustice Edition and Olympic Edition) Galaxy S7 and S7 Edge can sign up for the beta by downloading Samsung's Galaxy Beta Program app from Galaxy Apps and submit an application.

Samsung then needs to approve you for the beta, you're not guaranteed a spot.

Android 7.0 Nougat brings a lot of improvements such as built-in Emoji, the Vulkan API for superior gaming performance, smarter Doze for improved stand-by times and much more.

till now i still cant get the update beta :(.. are u serious gsmarena that update on today? dont give customer a hope :(

So you will get the update a bit late and that hurts you so much ? Get a life 😂