It seems Samsung's foundries will have no shortage of orders in the months to come. The company’s 14nm FinFET production process, originally developed for its in-house built Exynos chips, has naturally drawn the attention of other chip makers as well. By all accounts, Qualcomm's next powerhouse SoC – the Snapdragon 820, will also be produced by Samsung, using the same 14nm FinFET process intended for its new Exynos 8 Octa chips. 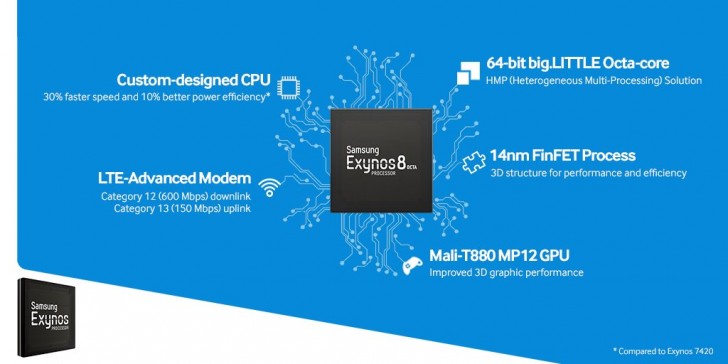 The process in question is actually a second generation FinFET, which delivers up to 15% higher speeds and roughly the same improvement in terms of power consumption over its predecessor. It is dubbed LPP(Low-Power Plus) and is an all-round improvement over last-years 14nm LPE process, despite the absence of a subsequent die shrink. This is achieved through the use of fully-depleted FinFET transistors, as well as numerous other improvements to transistor structure and process optimization.

This definitely levels out the playing field between Samsung and Qualcomm in their next-gen flagship chipsets, at least to some degree and is definitely beneficial to users in the grand scheme of things, enabling new more powerful and less power hungry devices.

Leakster: the Snapdragon 898 will run its Cortex-X2 prime core at 3.09 GHz

True, it was. But I think 2015 was also a bit of a disappointing year in terms of performance for Android at the high end, and that was mainly due to the majority of OEM's offerings being based around a chipset series that at the end of the day, unde...

lex I'm not a closeminded fan, there are things I don't agree with you but I'm not a kid to always argue. As much as I like Z5 yeah, I would love 820 in it. I don't care about how fast it is or better, but the battery performance and improved camera ...

And refreshingly, for once I agree with you, and I have high hopes for the 820. From what I have read about the new kryo cores comes, it appears they will offer a significant improvement in performance and efficiency over the A57, and the Adreno...