Earlier this month, Samsung held its “Life Unstoppable” virtual event where it announced the Galaxy Tab A7, Galaxy Fit2, and it announced the Wireless Charger Trio - a new wireless charger that mimics the idea of Apple’s AirPower Charging Mat. It’s a single product that can simultaneously (wirelessly) charge a phone, earbuds, and watch. 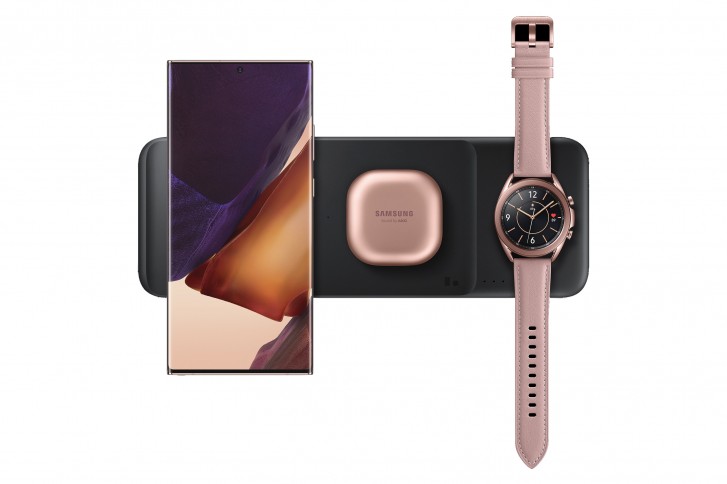 Samsung didn’t reveal any specifics about the charger at the event, but Samsung’s Germany and Korea's store pages have the Wireless Charging Trio listed. We are now offered new details on the charging pad.

The Charger Trio has six charging coils and can fast-charge Samsung phones up to 9W. It will support other Qi devices at up to 5W and will support 7.5W charging of Apple products. There are also built-in LED indicators to let you know their charging status. The charger is 240 x 86 x 15.5 mm and weighs in at 320g.

The listing mentions that smartphones can still recharge with cases up to 3mm thick, depending on the material. If the case causes the charger to head up, it will switch to a lower wattage and charge slower.

There’s still no word as to exactly when it will go on sale but given the timing of the Samsung Store listings popping up, it might be soon.

It's for samsung products only

Samsung made single, duo, now trio. Not sure how Apple came up with wireless charger idea 1st.