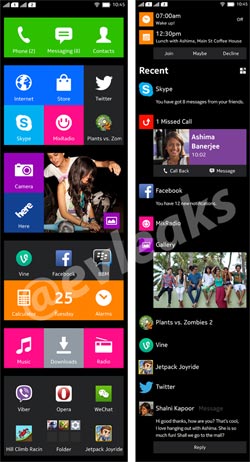 Fresh Nokia Normandy information made the rounds on Twitter thanks to @evleaks. The latest pieces of the puzzle are a couple of screenshots revealing the potential user interface of the phone. With live photos and press renders out and about, the Normandy looks to be a real deal after all.

The screenshots reveal what looks to be homescreen and notification area of the Normandy. The left screenshot is the homescreen, which is reminiscent of the Windows Phone 8 live tiles. At first, we were suspicious if this is Android at all, but the BBM app icon gave it away. The tiles look to be configurable and can either take a third of the screen (three on a row), or two thirds, like the Photo tile on the third row.

The notification area, which is on the right side of the photo, is a cross between standard Android notification area and the app launcher. There are alerts for the alarm clock, calendar, Skype, missed calls, gallery and SMS. In a true Android fashion, some of them are expandable, too, like the calendar, gallery, phone and SMS texts. They also give you quick action shortcuts with contextual menus for each notification.

Below the photo @evleaks states that there are "two ways to interact with Normandy", which could mean that those are the only two screens from the whole Android users are going to get. That's highly unlikely though, as it looks like those are two different views of the same thing - the homescreen with tile and list modes.

You can also see that the Nokia Normandy is going to be available in a dual SIM version, as shown in the status bar.

super idea . im waiting for that i love nokia 4ns

Nokia RM 980 was listed on Indonesia's postel. it's a proof that this phone is a real thing

our budget can't afford for it, if i were you check our wallet before saying it :p