Verizon typically has dibs on Star Wars-themed smartphones - they even licensed the word “Droid” from George Lucas. Now Sharp is stepping into their territory with a phone for SoftBank.

The phone comes in two versions - Light side and Dark side, naturally, and features live wallpapers and themes that turn its screen into the cockpit of an X-Wing or a Tie fighter respectively. Star Wars-themed ringtones, emoji and an alarm clock are also included. 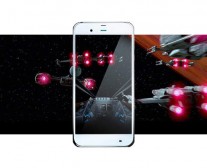 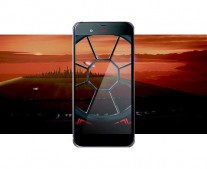 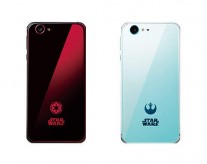 The Light and the Dark side

You also get to watch Star Wars: The Force Awakens for free. We’re not sure but you may have to bring your own lightsaber, though.

As for the Android smartphone qualities of the handset, it features a 5.3” IGZO display (1080p resolution), a Snapdragon 820 chipset with 3GB RAM and 32GB storage (plus a microSD slot) and runs Android 6.0 Marshmallow. Like so many of Sharp’s phones, this one is waterproof (IP58). 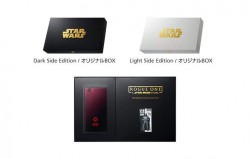 If you want one (and are in Japan, obviously), you can pre-order it today, shipments begin December 2. The first few to order will also get an action figure (spoiler: it’s Darth Vader).

Check out the latest trailer for Star Wars: The Force Awakens

Star Wars: The Force Awakens ? No Rogue One?

No it isn't, I like them both equally but ST is more nerdier than SW lol

I agree, plus 3GB of RAM; But it's still a nice looking phone, I want the Light Side version because I love its logo.