A new Samsung smartphone has been spotted in a benchmark listing. Listed on Geekbench as SM-J260G, it's an entry-level smartphone that could be well be the South Korean company's first Android Go attempt. 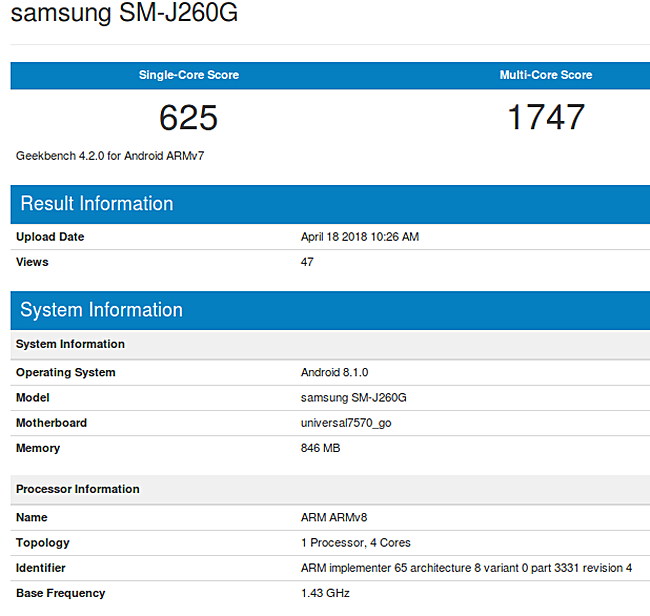 As you can see, this is a low-end handset with 1GB RAM, but runs Android 8.1 Oreo out of the box. Android Go is an iteration of Oreo aimed at smartphones with modest hardware, while Samsung doesn't typically release its entry-level devices with the latest available Androive version. Oh, and the motherboard is listed as "universal7570_go."

So enough indications that SM-J260G is an Android Go phone. Reports say it could carry the 'Galaxy J2 Core' moniker. Of course, nothing is yet officially confirmed. We'll let you know when more information related to this device surfaces.

I understand what you're saying about 5 year old phones being faster - totally. it's just they're hard to find and maintain. And that's sad, because there were some brilliantly made devices back in the day. 'This phones is only for phone calls a...

Oreo in version Go is still super laggy on phones with just only 1GB of ram and some unknown low end MediaTek Soc. Try it on Nokia 1. Sony phones 5 year old and in same price segment like Nokia 1 Android Go phone, for ex Xperia M is still faster phon...

Very interested in the Android Go devices. Android, but simplified. I like it. It brings Android to a line of devices that would otherwise be super laggy and hard to use.