HD gets a Pro flavor

The Sony Ericsson Vivaz pro Media center is a replica of what you usually find on the company's feature phones (and Sony PlayStation, mind you) - an attractive and convenient way of accessing the media content on your phone.

Sony Ericsson used the tight Media layout just like in the Satio, and there are only the three essential shortcuts to make up the media main menu - Photo, Music and Video.

As you may've already guessed, the first one will lead you to the main gallery with all its various options available. The second give access to the Walkman player and all playlists. Finally, the third one will take you to all the video clips stored on the Vivaz pro.

The media center in portrait and landscape mode

The photo gallery is the same as in the Satio and the first Vivaz and definitely among the best we've seen: with great customization capabilities and features aplenty. Some of those options include: one-click access to the latest snapshot you've taken, timeline view for your images and tags.

Tags are a very helpful feature offering better ways to make albums - a photo can have multiple tags, which you can't do with folders.

Viewing photos is fun with the Vivaz pro, especially when browsing images fullscreen. When you want to go to the next in line, it doesn't simply pop up but instead slides in from left or right.

You can reveal all the available options by tapping on the screen - delete, edit, use as, assign to contact, slideshow, print tag, rotate, information, etc.

There is also a Pictures section, which stores all the preloaded images that were not taken with the phone's inbuilt camera.

The performance of the gallery is great, but the zooming options are poor. You have to use the volume rocker or the virtual zoom in and out keys. There isn’t even the simplistic double-tap method to help you along.

The Sony Ericsson Vivaz pro comes with the Walkman music player with all the implied features but not all the usual eye-candy. Much like the rest of the media menu, the accelerometer is used here for automatic rotation of the display. The accelerometer is a bit trigger happy, and frequently auto-rotation kicked in when it wasn’t supposed to.

Naturally, the music player also offers step-by-step filtering of the tracks you want to listen to. The "Now playing" screen is simple but offers all the needed controls and information. The tracks are controlled by comfortably large and thumbable on-screen keys at the bottom.

The Vivaz pro doesn’t offer equalizers or alternative visualizations. The homescreen player controls are also missing, but since the previous Vivaz had them, it was probably just our unit acting up.

There’s a free equalizer app you can download from Play Now. You can read more about it here.

The video player on the Sony Ericsson Vivaz pro is nothing spectacular. Sure, it plays 720p videos but it’s limited in the codec department.

Lacking DivX/XviD support can be overcome by re-encoding the video you want to upload. For that you can use the MediaGo application that Sony Ericsson launched a while back. It’s not without its limitations, but it’s still a pretty sweet app.

You could of course buy a third-party video player that supports DivX/XviD.

The video player could have used DivX support

When it comes to the watching experience itself, the Vivaz pro is great. The screen is particularly well suited with its high resolution and 16:9 aspect ratio (so HD content can be downsampled with no black bars).

The Sony Ericsson Vivaz pro also offers TV-Out and you can choose to output in Normal or Widescreen modes. If your TV set is DLNA enabled, you can use the Media server app instead – we’ll look at it later on in the review.

The integrated FM radio of the Sony Ericsson Vivaz pro has memory for 20 stations and RDS support. It has a nice interface and makes great use of the TrackID music recognition service. The radio can be minimized in the background much like the music player.

The FM radio has RDS this time around • TrackID

The fact that Sony Ericsson Vivaz Pro has the exact same audio output as its QWERTY-less brother is hardly a surprise. This means that the Vivaz Pro lacks some loudness but compensates with a nice clean output and a few great marks in our audio reproduction quality test.

The noise level, dynamic range and stereo crosstalk are particularly impressive, while both of the distortion readings are pretty decent.

The cut-off extreme bass frequencies are the only slight shortfall of the Vivaz Pro frequency response. However it is excellent for the rest of the audible range so that's no biggie.

Here go the results so you can see for yourselves. 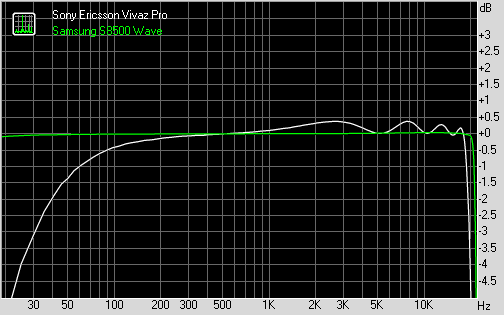 would anyone buy this phone if it came out with ios or an android OS?

i want to know , why my font can't connect internet??