In light of the MWC 2020 cancellation Sony had an online event to announce its new flagship. Dubbed Sony Xperia 1 II (reads Xperia One Mark Two) it brings the latest chipset, a revamped camera setup, and 5G support. Alongside it the company also confirmed that it's developing the Xperia Pro, which is meant to serve as a professional tool for video makers.

This year’s Sony flagship is built around a 6.5” 4K HDR OLED panel with the now-familiar 21:9 cinematic ratio. Sony skipped on a high refresh rate screen and chose to implement Motion Blur Reduction instead. It claims to match the benefits of a 90Hz display by analyzing what's on the screen and adjusting individual frames to reduces frame lag. 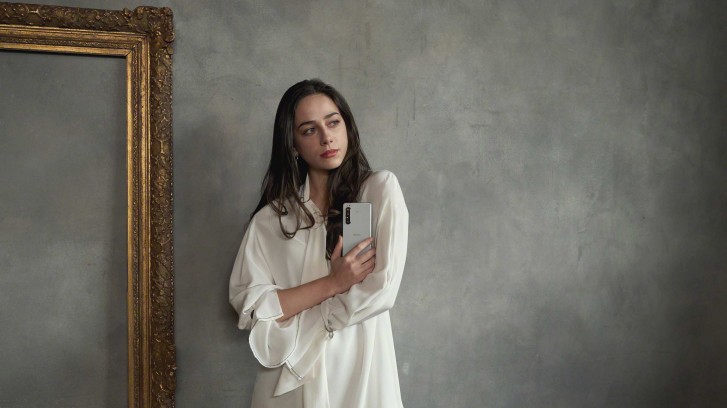 This time the trio of cameras is positioned on the left side, unlike the initial Xperia 1 that had the setup in the center. The resolutions are unchanged - 12MP main + 12MP ultrawide + 12MP telephoto, but the new setup brings bigger sensors and faster lenses, which for the first time carry the ZEISS branding. The front-facing camera is seemingly unchanged - an 8MP unit sitting in the top bezel.

The top module at the back is the ultrawide angle shooter with a 16mm equivalent focal length and f/2.2 aperture and 1/2.6" sensor with Dual-PD AF. Then there's the telephoto shooter with 70mm equivalent focal length, f/2.4 OIS lens and 1/3.4 with PD AF in the middle.

The main shooter of the Sony Xperia 1 II has a very big 1/1.7” Exmor sensor with Dual PD AF sensor and OIS. It also has the brightest lens - f/1.7. Sandwiched between the main and telephoto cameras is the 3D iTOF sensor, which should further help with the focusing speed.

Speaking of focusing, the Xperia 1 II comes with the Eye AF from the Xperia 1, only this time it also works on animals. Sony says this is the first smartphone that can do 20fps bursts with AF tracking, which means that all shots in the burst will be in focus.

The Japanese company proudly announced the new cameras are calibrated by ZEISS specifically for the Xperia phone, with ZEISS T* anti-reflective coating that was previously available only in professional lenses. This should mean less ghosting effect when you shoot against a source of light. The Sony Xperia 1 II runs Android 10 on the Snapdragon 865 compete with the 5G modem that works on Sub 6 GHz networks. It has 8GB of RAM and 256GB of UFS storage.

The phone is rated IP65/IP68 for water and dust protection and has a 4,000 mAh with wireless charging support inside.

The Xperia 1 II comes with stereo speakers that are said to be an improvement over the Xperia 1's and it also brings back the 3.5mm audio jack that was entirely absent on last year's model. There's also a fingerprint sensor on the right side of the phone.

The Xperia 1 II uses plenty of know-how from the other Sony divisions - its camera interface is aligned with the one found on Sony Alpha cameras, and just like the previous phone, it has the Cinema Pro app co-developed with Sony’s CineAlta and Alpha divisions that lets you make professional-looking videos, and this time it also has touch focus, unlike the fixed version in the Xperia 5 and Xperia 1.

There is also a new app called Camera Pro that does the same job for images - it provides plenty of controls and color management pre-sets for all kinds of setups. Audiophiles get the 360 Reality Audio Audio hardware decoding to optimize sound quality when listening to music on Tidal.

The Sony Xperia 1 Mk II is coming in Black and Purple in Europe, shipping with Android 10 from late Spring 2020. Pricing is yet to be confirmed.

Sony says the Xperia Pro is a professional solution rather than phone it expects to sell in an electronics shop close to you.

It still in development, which means that its full specs sheet isn't confirmed yet. What we know is the Pro shares the display and camera setup with the 1 mark II. It will come with an HDMI port and seamless integration with Sony Alpha cameras that can use it as a viewfinder and then leverage its 5G connection to act as a broadcasting device. A customizable shortcut key on its side will let you launch any app in an instant.

The Pro will double the storage to 512GB and feature a sturdier body - its back is inspired by the Alpha cameras and should provide excellent grip.

The Xperia Pro has a unique 4-way 5G mmWave antenna arrangement, meaning, in theory, it could broadcast with speeds that can reach 5 Gbps or faster, provided the phone has a clear sight to a 5G antenna (which is the main downside of the mmWave technology).

Currently, AT&T, T-Mobile, and Verizon are implementing mmWave networks in the States, while only Sprint relies on the Sub6 spectrum. That is probably why the Xperia Pro won’t be offered in Europe. Further details about its release and pricing will follow.

Watch the introduction of the new Sony Xperia devices

You have no right to talk if your phone costs over $1000 and doesn't have 4K HDR display with no cutout. End of discussion already.

Are you high?? Show me one mobile from other companies with Omni-Balance design in 21:9 aspect ratio????