But Sony has bigger things in mind – the RX0 can be used in multi-camera setups to create bullet-time, time-slice and many other effects. Using the FA-WRC1M wireless commander, you can trigger up to 15 cameras simultaneously. If you decide to slum it, you can trigger up to 5 cameras over Wi-Fi (a firmware update coming in January will up that number).

The video recording capabilities are particularly impressive. It can record 960fps slow-motion like the XZ Premium, as well as 240fps at 1080p. There’s a microHDMI port for pros who want to use an external recorder. S-Log2 recording and User Bits would also be of interest (the first helps color grading, the second is an advanced time code for syncing multiple cameras). 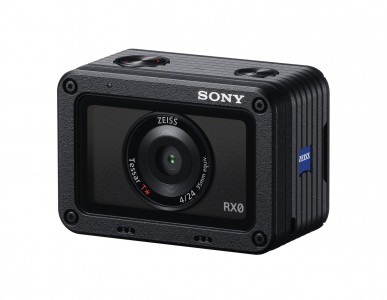 The Sony RX0 is more than an action cam

The Sony RX0 is waterproof up to 10m, but if you’re serious about underwater shooting, then you can grab the special housing that can dive up to 100m depth. Even on dry land, you don’t need to be gentle – the camera can handle drops from up to 2m and can withstand a crushing force of 200kg.

There’s a 1.5” TFT screen on the back, though you’d probably find it easier to control the camera with a smartphone, from a computer (via USB) or with the wireless commander mentioned above (which is a whopping $350!).

I hope they will changed their Sony Xperia Compact series into this kind of beast without a hefty price. A phone taking videos underwater with a rugged build is a dream.