The XB900N are the latest in Sony's line of Extra Bass headphones. These try to incorporate some of the features from the higher-end model, the WH-1000XM3, including things like active noise cancellation and a gesture-based control system. In this review we will learn how the XB900N sound, how comfortable they are, how all the different features work, and whether or not they are worth your money. 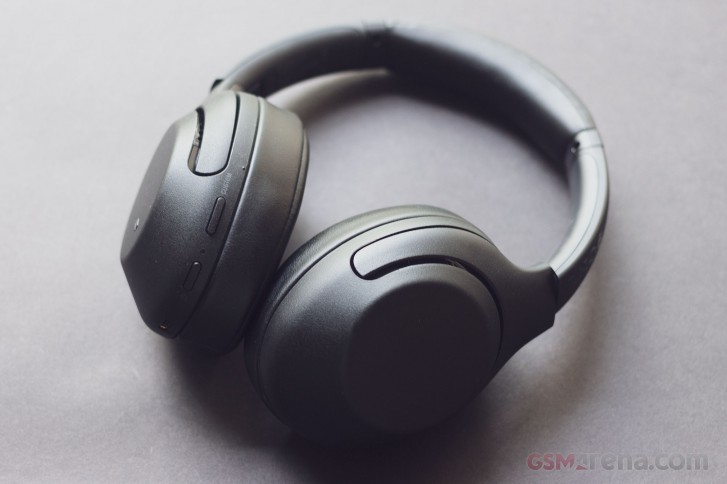 The design of the back of the ear cups resembles that of the 1000XM3 at first glance, with large flat areas and a smooth gradation down to the ear cups. However, above the ear cups is a large air vent hidden underneath the yokes, similar to the XB700N. The vent helps with the bass delivery.

The ear cups feature thick padding with a soft, leather-like material. Inside is a cloth grille covering the main plastic grille for the drivers.

Moving up, the headband is fully adjustable and articulating, which allows the ear cups to slide up and down, swivel 90-degrees and also fold in one at a time. You can swivel the ear cups when you are hanging the headphones by your neck and both swivel and fold the ear cups while traveling. There's no travel case provided with the XB900N but you do get a thin cloth bag, which isn't particular useful.

Right at the top is the headband with a similar plush cushion as the ear cups. It's not as dense as the one on the 1000XM3 but it's comfortable enough.

In terms of materials, the externals are made entirely out of plastic with a soft, matte finish. It doesn't feel as premium as that on the more expensive 1000XM3 but the headphones don't necessarily feel cheap or poorly built.

Comfort is a major part of a headphone design. You wouldn't want to wear headphones that aren't comfortable even if they sound good.

Fortunately, the XB900N are generally quite comfortable. The thick padding on the ear cups is quite soft and easy on the ears. There's also plenty of depth to the padding so your ears wouldn't normally touch the grille inside. I wish the diameter of the ear cups was ever so slightly larger so my ears didn't touch the inner rim of the ear cups at times. 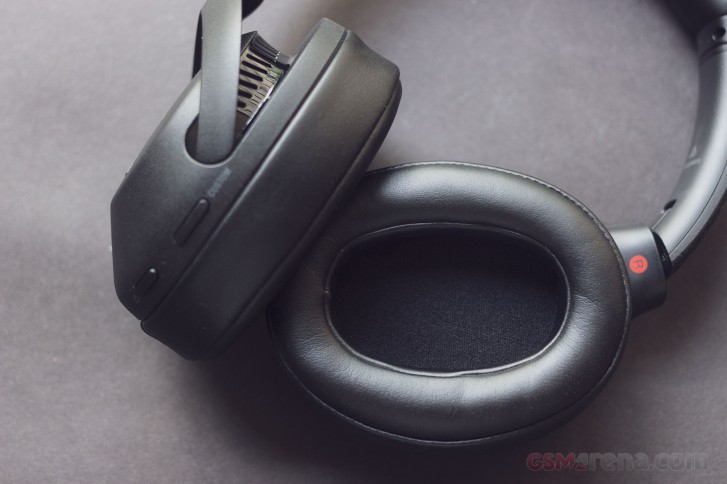 The ear cups create an excellent seal around your ears. They almost stick to your skin with a suction method, meaning very little air goes in or out. This was a complaint we had with the CH700N, which didn't create a very good seal. However, the downside of this is that there's not much ventilation for your ears. While this wouldn't be a problem in colder climates, in the hotter and more humid parts of the world, this is a great recipe to cook your own ears. Unfortunately, this is standard issue for all noise canceling headphones and not limited to the XB900N.

The XB900N has a mix of physical buttons and touch-sensitive panels for controls. The physical buttons include a power button, which also doubles up as the pairing button when pressed and held for longer. Next to it is a custom button, which can either be assigned to a voice assistant (Google Assistant or Alexa) or controlling the noise canceling feature through the app. 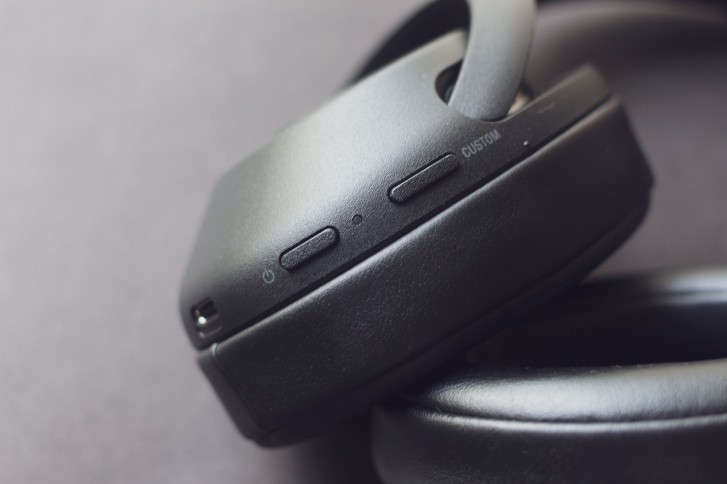 All the other controls are managed through the touch panel on the right ear cup. The gestures are identical to that of the 1000XM3; you tap twice to pause the music and twice again to resume. You swipe up once to increase the volume one step or swipe and hold to keep increasing in small steps. Same for volume down except you swipe down. To skip tracks, you swipe forward or swipe back to go back to the previous track or the beginning of the current one. You can also cover the entire side panel with your hand and it activates the Ambient mode that boosts ambient noise while lowering the volume of your audio source so you can hear what's going on around you.

The gestures are reasonably easy to figure out and remember. For the most part, they also work quite well. However, not everyone is a fan of these gestures as they feel less direct than pressing physical buttons and you can also look quite silly swiping on your headphones in public. They also don't work the way you want 100% of the time, unlike physical buttons.

The 1000XM3 gestures also have trouble working in the extreme cold and while we didn't quite have such a weather while testing the XB900N it's possible the same issue exists with these pair as well. Overall, the addition of gestures is a mixed bag and may not be for everyone as they can be both, subjectively and objectively worse than physical buttons at times.

The software is the same Sony Headphones Connect app that we have seen for previous Sony wireless headphones. Through this app you can control the EQ, various audio effects and the noise canceling settings. The app lets you choose between a stable connection with the basic SBC codec or high quality mode, which could be AAC, aptX, aptX HD or LDAC, depending upon your device. As before, the EQ and audio effects only work if you choose the stable SBC mode and are grayed out for other codecs.

The app is available for both, iOS and Android and we recommend having it installed and opening it periodically even if you can't use any of the EQ or audio effects because the app also lets you update the software of the headphones.

One of the advertised features for the XB900N is active noise canceling, as denoted by the N at the end of the model number. It works similar to most headphones by generating an inverted phase audio signal with the same amplitude as the ambient noise and piping it through the speakers to cancel out the noise.

Unfortunately, the active noise cancellation on the XB900N is extremely mediocre beyond what the headphones can do naturally with their earpads. It can cancel out noise in some parts of the frequency range, typically the mid-range, but a lot of the lower frequency noise seeps through. So you get some reduction in the noise but you can still hear most of your surroundings and you don't quite get that same sense of solitude that you get with the more expensive 1000XM3, which is the industry benchmark. Also unlike the 1000XM3, the XB900N does not have microphones inside the ear cups to analyze the audio you're hearing so it can't customize the sound for each ear and head shape. There's also no compensation for the change in the atmospheric pressure on flights.

Overall, the noise canceling on offer here is extremely basic and is more of a tick on the spec sheet rather than a serious feature you should be considering while shopping.

The XB900N are a decent sounding pair of headphones. They have a bass-heavy sound as you'd expect from an Extra Bass series of headphones but the rest of the audio is underwhelming.

The bass is boosted across the range and can be quite powerful but it's not as overbearing as it used to be on older Extra Bass headphones. It is deep, full-bodied and has massive presence. It can be quite dominating, even on tracks where it shouldn't be, but that's sort of what you're paying for when you choose these headphones.

The mids have been dialed back and there is some overshoot from the mid-bass, which masks some of the vocals and instruments in that range.

The high-end is underwhelming. Like the mid-range, it consistently lacks volume and detail and mostly comes across as being soft and muffled.

The headphones have good imaging but the soundstage is quite narrow and limited to the extent of the speakers around your head. 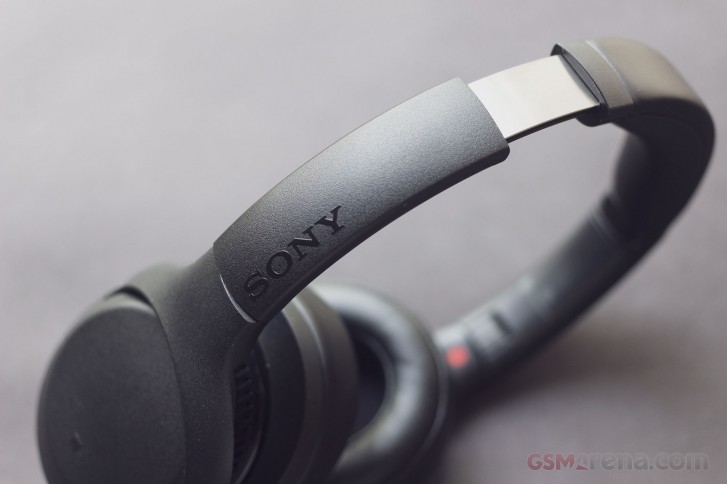 Our testing was done by pairing the headphones to a OnePlus 7 Pro and manually selecting the highest bitrate for LDAC from the developer settings, as LDAC tends to be finicky and can drop down to lower bitrates if it doesn't think the connection is stable. We also tested the headphones by connecting the supplied audio cable and plugging it into a Redmi K20 Pro.

With the audio cable we noticed that there was an audible hiss in the background that wasn't there in the wireless mode, so that's something to take note of.

The XB900N also has mediocre microphone quality. The sound is quieter and muffled compared to even basic wired earphones like the EarPods. Unfortunately, this is due to the outdated Bluetooth headset profile and codec, which limits how good the microphone audio can sound during calls, and is an issue with all Bluetooth devices on the market. However, for short calls it's not much of an issue.

A quick word on latency. The latency is on the higher side compared to wired headphones but they are still usable for watching videos. You may, however, notice some lag in high paced competitive games and for that wired headphones will be your best option. Of course, for music, the latency is not a problem at all.

We didn't do a full battery life test on the XB900N but during our first week with the headphones it basically required no charging and was really hard to kill, so we have very little trouble believing Sony's 30 hours battery life figure.

Unfortunately, with the long battery life also comes a long battery charging time. At around 7 hours, the XB900N basically require an overnight charge and there's no fast charging support here. Fortunately, they use a USB-C connector to charge.

The Sony WH-XB900N are priced at US$249/€249/INR16,990. For that price, they are a decent pair of headphones… for a certain type of person. These are Extra Bass headphones and that really is their selling point. If you're the sort of person who enjoys big, bassy sound then you should be happy with them. The fact that they are comfortable and have excellent battery life is just a cherry on top.

However, for those with more balanced taste in audio, there are better options out there, including Sony's own WH-H900N, which sound far better overall and are also cheaper in some markets than the XB900N. The still cheaper WH-CH700N also sound better overall. Even the Beats Studio 3 have a more balanced sound, and that's saying something.

None of these headphones have good noise cancellation, which is a feature the XB900N proudly boasts if. If that's what you want then you are better off with Sony's more expensive WH-1000XM3 or the older Bose QuietComfort 35 II. And if you don't want noise canceling at all, there's also the Audio Technica ATH-M50xBT.

Basically, there are a lot of good sounding options out there, so make sure you choose these only if you really like bass.

the wired connection has better sound quality than wireless connection, so you don't have to worry.

I also noticed a hissing sound when connecting the headphones via cable which is very disappointing and doesn't make any sense. It's not quiet at all, it's really prominent when on pause or playing at really quiet volumes. Other than t...

Hey! I really want to buy these headphones and I dont have a bluetooth capable PC. Are you sure that the sound quality will be the same using the cable (when the headphones are turned on?) as when using bluetooth?