We should all be familiar with Sony's custom gallery - Album. It organizes images into groups of thumbnails and sorts them by date. You can change the thumbnails size by pinching.

Unlike previous versions there isn't a homepage that hosts all of your albums, instead you get the same navigation drawer as the app drawer is offering. There you can find a selector of all of your online and offline albums.

Images can be cropped or rotated directly in the gallery. Quick sharing via Picasa, Email apps, Facebook, Bluetooth or MMS is also available.

The Walkman interface is based on a hidden swipe-able menu that sort your music collection by Artist, Albums, Playlists, all songs and even the songs your friends are listening to (but you need to connect the player to your Facebook account). You can pop up the menu the same way you'd do it in the app drawer or the gallery - just swipe from the left edge of the screen.

The Walkman player offers a variety of audio settings - ClearAudio+ option is here, which determines the best audio quality settings depending on the song you're listening to. We liked how it changed the music and carefully accentuated various details.

Dynamic normalizer evens out the differences in the volume between tracks, which is great if you've mixed multiple albums from multiple sources.

The Sound enhancements contain yet more settings. There's an equalizer with presets and manual settings (including tweaking Clear Bass). Then there's Surround sound mode, which imitates the Studio, Club or Concert Hall experience.

The Clear stereo mode enhances the perceivable stereo channel separation. The Dynamic normalizer minimizes the difference in volume between songs (great if you're playing a shuffled mix).

Speaker settings include Clear Phase, which adjusts the quality, while xLOUD boosts up the internal speaker. Both can be balanced simultaneously through Clear Audio + for best results.

There's also an FM Radio. The app features multiple visualizations and integrates with TrackID to recognize the currently playing song. You can even directly send an "I'm listening to..." post to Facebook. The interface is very intuitive and complete with stunning animations. Possibly one of the best FM radio apps out there.

FM Radio with RDS and TrackID

The Sony Xperia E4g was able to handle videos up to 1080p resolution. It had issues with the AC-3 audio codec and failed to load sound in videos carrying it but that's mostly normal for smartphones these days. MKV movies went through, but without sound because of their AC-3 audio codec.

The video player comes with subtitle support by default, the only requirement is both file names (video and subtitles) to be identical.

The Sony Xperia E4g did very when connected to an active external amplifier. All of its readings were great and the volume levels were above average, rounding up an impressive performance.

Plugging in a pair of headphones causes a fair bit of degradation though. Volume levels drop to below average, frequency response starts to fluctuate a bit, some intermodulation distortion appears and extra stereo crosstalk creeps in. Still, none of the damage is too great and the overall performance is still decent, if no longer worth bragging about.

And here go the detailed results so you can check them out for yourselves. 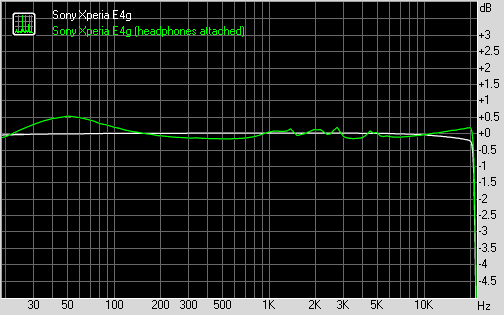 Now after 4years battery is down how to get bettery

Why is the battery not lasting