Sony Xperia Ear was announced back at the MWC as part of the new Xperia accessory lineup. It went official with three more devices - the Xperia Eye clip camera, the tiny Xperia Projector, and the Xperia Agent hub for home automation.

The Xperia Ear is the first of these to make it to the market. It's a smart headset capable of recognizing voice commands or head gestures, and answer with voice input. It comes with a rather big box, but that's actually a portable battery pack that can recharge the Ear once.

The Xperia Ear packs enough battery juice to last you a day, so with the charging cradle you can go at least two days without needing to recharge. It's a nice touch and we appreciate the idea.

The Ear itself is very lightweight and feels comfy in the ear. It automatically detects when you put it on or out and if you are just putting it on it will automatically spill out each notification you have missed in the meantime.

The action of the start-up messages is configurable from the dedicated Xperia Ear app - you can choose the notifications you want to hear upon putting on the hands-free or just opt for the current date or a pre-defined greeting.

There is a single hardware button on the Xperia Ear, which is quite hard to press and will push the earbud further in your ear. Considering you'll have to do the pushing a lot throughout the day, this might be slightly awkward. A touch key would have been a much better solution, but Sony decided to go with a hardware one.

That key is the only control on the Xperia Ear. Naturally, it can answer, end, or reject calls. It supports long-press and the action is also configurable via the Xperia Ear app.

A short press on the key will make the Xperia Ear assistant ready to listen for your voice command. You can:

A long press on the key lets you do one of the following: 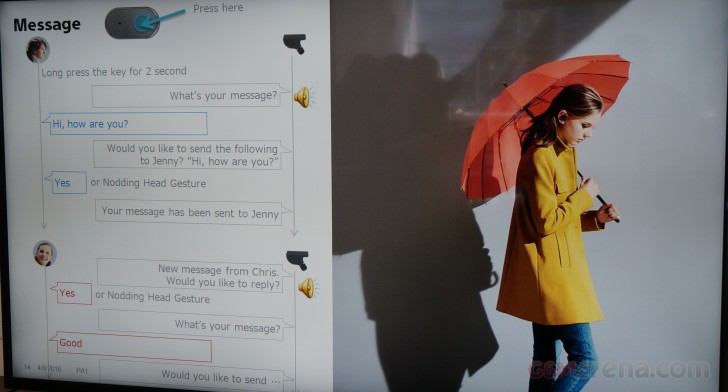 Finally, the Xperia Ear can be used for navigation on the screen touch-free. It recognizes navigation commands (left, right) and can help you interact with your smartphone hands-free (for example while driving).

You can replace the Xperia Assistant with Google Now, if you like, though you'll lose some of the functionality.

The Xperia Ear is a really nice headset, with lots of smart functions, which will surely find its fans on the market. Lots of people prefer headsets with two earpieces, so the Ear won't matter to them. But it sure has big potential and looks a wonderful tool for people with busy lives.

should of made wireless earbuds to compete with Samsung Icon and Apple airpods instead of this. It will be a long time before we can just talk to an assistant and do everything without looking at the screen.

Fax me if it will be good