The Sony Xperia M4 Aqua slipped out from under the covers once again, this time the white one. The new set of photos shows more angles of the upcoming device, which follows Sony's traditional OmniBalance design.

The handset has front-facing stereo speakers, similar to the Xperia Z3. The handset will be waterproof, most likely IP68, but there doesn’t seem to be a flap protecting microUSB port. Until now exposed USB ports have limited water resistance to IP67, so we'll have to wait until the official announcement to get the real number. 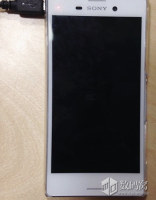 Thanks to Anurag for the tip!

Lol dude M4 aqua has no stereo speakers. It's just looking like it would have to make people like u believe they buy a midrange phone with stereo speakers

I bought M4 aqua a week ago. I realize that the stereo speakers are not working, only the main bottom speaker is working. Any one else came up with this??

I'm glad Sony is sticking with the 5.2" form factor in their flagship. But they've got to make the phone smaller. Those bezels (top, bottom, sides) are huge. There's not excuse anymore, phones have moved way beyond their design language.