Sony Xperia neo L review: Blast from the past

Blast from the past

Two galleries to do one job

In the Xperia Gallery, the different albums and folders appear as piles of photos, which expand into neat grids of photos sorted by date. If you have online albums over at Picasa those show up as separate stacks as well.

The Xperia gallery • The 3D and Multi Angle views

If you choose the native Gallery app, you'll find a similar arrangement by default - images sorted into albums. However, you can group photos by other attributes too (location, time, people and tags are the other available options).

When viewing individual images with this gallery app, you get a filmstrip of thumbnails at the bottom of the screen, which can be used to quickly jump between images.

Images in both galleries can be cropped or rotated directly in the gallery. Quick sharing via Picasa, Email apps, Facebook, Bluetooth or MMS is also enabled.

The BRAVIA engine enhances contrast and colors by sharpening the image and reducing noise. These steps would normally lead to artifacts, but you'll have to look from really up close to notice. You can switch BRAVIA off, but we recommend keeping it on - it really improves the viewing experience.

There is no dedicated video player app on the Xperia neo L and the phone has limited video playback support as a whole. We only really managed to get MP4 files to play and ran into plenty of issues with large files.

Watching a video on the Xperia neo L

Depending on which of the two players you choose to use (there are two galleries and two video players), you get access to a simple video editor that can trim the start and end points of a video.

You can download a video player off the Google Play Store with support for more video codecs but chances of getting an HD video (one not shot with the phone itself) to play are pretty slim.

The music player missed the update

The Sony Xperia neo L uses the old music player - the one used before the NXT series. The interface is laid out in four tabs for the available sorting options: all artists, all tracks, playlists and albums.

If you hit the menu key you'll get a search shortcut, as well as send and delete options.

The music fans will appreciate the selection of equalizer presets but there's no customizable preset. You also get Silent mode, which mutes all other sounds except for alarms - great for uninterrupted listening.

While the rest of the music player is the same as what we saw on the neo V, this one adds music controls to the lockscreen. They replace the clock, which might be annoying if you just want to check the time. Still, the clock slides out of view, so you have about a second to see what time it is (or just look at the small clock in the upper right corner).

The Sony Xperia neo L fared did great in our audio quality test. It's volume levels were below average in both testing scenarios, but the audio output was almost perfectly clean.

. When connected to an active external amplifier, the Sony Xperia neo L got excellent scores all over the field. There were no weak points to its performance so, the volume levels aside, it's as good as it gets.

The degradation when headphones come into play consists of rather small hikes in stereo crosstalk and intermodulation distortion. None of the readings should cause any concerns however, so it's an excellent overall performance. 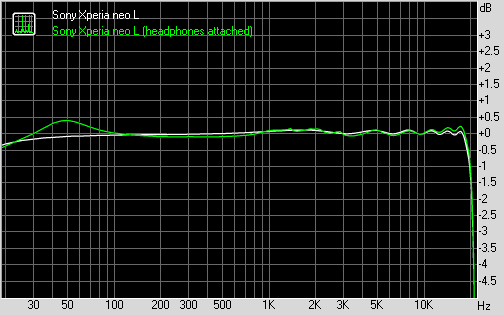 bsm,I've got one of these,it does not work fluently,battery life is so short that you have to charge phone every time you do 2hours of web browsing,the keys of the phone(back,home,sett) will stop working after sometime and you'll have difficult time ...

Is it possible to increase internal memory from1GB(approximate usage 315MB only) to 3 or 4GB?